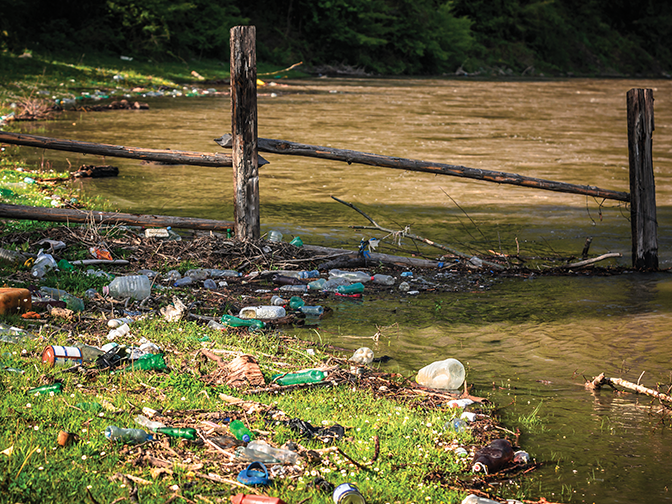 Groundwater, one of the world’s most precious resources, is responsible for 51 percent of drinking water supplies in the United States, 99 percent of which is the rural population. Groundwater helps grow our food, with 64 percent being used in irrigation.[1] But what happens when the groundwater becomes contaminated, undrinkable, and unusable? With groundwater being the largest source of freshwater on the planet, the effects of groundwater contamination can become catastrophic, resulting in poor drinking water quality, a loss of water supply, increased costs for alternative water supplies, high cleanup costs, and potential health issues.

Much of human activity has unintended consequences—some are discovered right away while others may take decades to discover. Oftentimes we forget that what we put on the ground today ends up under the ground. While groundwater contam­ination is “nearly always the result of human activity,”[2] natural disasters can also factor into the contamination of this water source. Industrial, municipal, commercial, agricultural, and residential activities can all pose a threat to groundwater. While the portion of groundwater in the United States considered to be contaminated is small, it’s still significant because of its location near heavily populated areas, its many uses, and the increased dependence on groundwater.[3]

Natural Disasters
Natural disasters, such as fires, tornadoes, hurricanes, earthquakes, floods, etc., all have the potential to devastate our water supply. Natural disasters can introduce large amounts of contaminants into groundwater sources, spoiling the water supply, and further devastating the population.[4] Floods, tornadoes, hurricanes, wildfires, and earthquakes can cause damage to drinking water wells, leading to the contamination of groundwater from livestock waste, human sewage, chemicals, and other impurities.

While earthquakes can cause this disturbance in the water level, the quality of water can also suffer. Following an earthquake, well water can become turbid as a result of loose sediment. While this issue is often temporary, there are also more serious impacts on water quality following a strong earthquake. Strong earthquakes can cause damage to sewer lines, gas lines, and other infrastructure that contains hazardous materials, which results in contaminants being released into the water.[5]

Floods
While it is recognized that floods, as a result of heavy rainfall, are critical to the recharging of groundwater in certain areas, it is also recognized that floods can facilitate the infiltration of contaminants into groundwater.6 Floodwater can often be contaminated with pollutants such as pesticides, industrial chemicals, debris, and sewage. As a result, floodwater that enters into groundwater supplies can affect water quality by introducing contaminants into the groundwater.

In 2017 Hurricanes Harvey, Irma, and Maria caused heavy flooding in areas of Texas, Florida, and Puerto Rico. The extreme flooding caused thousands of individuals to lose access to clean drinking water due to floodwaters containing untreated wastewater infiltrating groundwater supplies.[7] Floodwaters can cause disruption or damage to wells and other water supply infrastruc­tures, directly introducing contaminated water into these groundwater supplies.

The long-lasting effects of wildfires on groundwater supplies can be seen in New Brunswick, Canada, as two years after the Minto tire fire, the area is still impacted by fire contaminants. While water from the site of the Minto tire fire is still being collected and tested, it has been noted that the groundwater impacted by contaminants from the fire are flowing away from nearby potable water supplies.[9]

In July, Governor Michelle Lujan Grisham declared an emergency in Las Vegas, NM, for their water supplies as the result of con­tamination from ashy sediment and debris from a widespread burn scar. The city was unable to draw water from the Gallinas River as it had been contaminated with ash and other debris.[10]

Urban Runoff
When rain falls in urban areas, water sheets off of roofs, parking lots, and roads; this water passes through infrastructures that moves that water into pipes and streams, relocating it downstream and out of the town.[12] Unfortunately, with growing population and urban development, this solution is becoming more and more unstable. When this water is moved downstream this way, it begins to seep into the groundwater resulting in pollutants such as road salt, gasoline, sewage, and medication to contaminate groundwater sources. Urban development has a profound effect on groundwater supplies in these areas and unless this ground­water is better protected from contaminants, there will continue to be an increase in scarcity of clean water supplies.[13]

PFAS
PFAS are gaining more and more recognition around the globe as they are causing severe and lasting consequences in the environment and in people. PFAS are seeping into groundwater supplies and soil around the globe. PFAS chemicals have also spread into the atmosphere and can be found in the rain and snow, even in the most remote places. PFAS are known to cause a variety of health problems including cancer, learning and behavioral problems in adolescents, infertility and pregnancy complications, high cholesterol, and issues with immune systems.[11] With PFAS permeating the atmosphere, rain and snow, soil, and more, they are posing a greater threat to groundwater supplies and those reliant on them. If rainwater everywhere contains enough PFAS that it has been classified as unsafe to drink, and this rainwater is getting into groundwater supplies, then how is it safe to drink and what can be done to combat this forever contaminant?[11]

Another cause for concern where fuel is affecting groundwater supplies is the storage tanks at gas stations. These storage tanks, located underground, are not infallible and have been known to have leaks that cause gasoline to seep into groundwater. When refueling takes place at gas stations, contaminants can enter stormwater runoff, surface water, and groundwater, infecting these water supplies with toxic hydrocarbons, oil and grease, heavy metals, and other toxic chemicals.[16]

Global Conflict
When we consider the detriments that come along with global conflict, we look at the destruction of homes, cities, people, the economy, and more; but what about water supplies? Armed conflicts have the potential to disrupt water systems that play a key role in environmental and human wellbeing.[17] The effects of armed conflicts can cause damage directly to water resources and through contamination from any weapon residue. This can been seen in conflicts going back to the First World War. During the Gulf War, water resources in Kuwait were polluted by oil from spills following attacks on oil fields, which increased the concentration of trace metals in the Persian Gulf and other groundwater supplies.[17] During the Syrian civil war there was a discharge of untreated wastewater into the environment, which caused deterioration in water quality. In areas where there are still explosive remnants, such as landmines, scientists have found higher concentrations of heavy metals, fluoride, and calcium in groundwater supplies.[17] This history of armed conflict across the globe reveals one terrifying constant, groundwater supplies suffer and the existing lack of clean water resources is limited even more.

Moving Forward
The world does not have a shortage of water—it has a shortage of good, clean, usable water. Groundwater may be seen as a great, hidden resource that is vast and flowing, but this is not the case. Groundwater is like the water in a sponge and moves slowly through the earth and is replenished locally.[18] Groundwater is an important source of drinking water and these supplies have grown vulnerable and threatened. Groundwater is not an inexhaustible resource, supply can be exceeded, and streams and wells can dry up.

This is where water treatment professionals can make a big difference. Whether it is treating contaminated groundwater, monitoring wells and water supplies, or helping to re-establish clean water after a natural disaster or war, water treatment experts are vital in making sure the groundwater people use for drinking is safe, reliable, and plentiful. New technologies and methods are being developed to cope with urban runoff and PFAS chemicals. While our groundwater must be protected and preserved, the water treatment industry continues to adapt and learn how to meet these challenges.

Kaitlyn R. Longstaff is associate editor at Water Conditioning & Purification Inter­national magazine. She studied English at Southern New Hampshire University and Publishing at The George Washington University. She can be reached at klongstaff@wcponline.com.