Ecosoft’s Resilience in the Midst of a Devastating Conflict 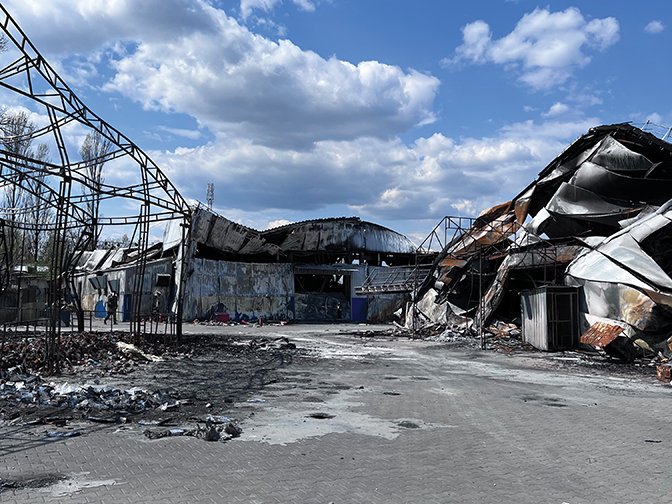 As part of a conflict dating back to 2014, the peak occurred when Russia launched a full-scale military invasion of Ukraine on February 24, 2022.1 According to the United Nations, the Russia-Ukraine conflict has displaced over seven million people, and forced another five million to flee Ukraine, with the majority arriving in the neighboring countries, specifically Poland.[1]

Founded in 1991 by the Mitchenko family, Ecosoft began as an engineering company that has evolved into a significant man­ufacturer and distributor of water quality treatment products over the past 30 years. Ecosoft operates across Europe, the United States, and former Soviet Union countries, with their production and expertise concentrated in Kyiv and Irpin, Ukraine.

Acquired by Austrian BWT in 2018, Ecosoft was able to expand their activity across Europe in France, Italy, Germany, and Scandinavia, among other locations. The low-cost production opportunities in Ukraine allowed for a fast-growing local market for Ecosoft, however, it was difficult for the company to expand internationally. In 2012 Ecosoft Water Systems GmbH (Germany) was founded; with the local market in Germany being highly regulated and dominated by larger local manufacturers, Ecosoft made the decision to relocate their European Union operations to Belgium in 2021.

With their main office and production center located in Kyiv, Ukraine, Ecosoft has fallen under an area affected by long-range missile strikes that resulted in the significant damage of military assets, urban residential areas, as well as communication and transportation infrastructure.[1]

Immediate Actions After the Attack
Ukrainian citizens awoke to the sounds of large explosions beginning at 5am on February 24. During the first day of the war, major fights were already taking place within a 10-mile radius of Ecosoft’s factory and headquarters in Irpin, a city where Ecosoft CEO Andrii Mitchenko and the majority of Ecosoft employees resided. Mitchenko said, “we were pretty lucky to have an emergency plan in place…and timely informed the employees to shelter in place.” On February 24 Ecosoft’s management team met at the factory, and the decision to shut down machinery, close the warehouses, and leave only essential security personnel on site was made. However, the conflict escalated quickly, and by that evening the decision was made “to evacuate personnel…to the western part of the country to the city of Ternopil.”

Roughly one week after the attack, Ecosoft’s newly built factory was set on fire following multiple missile attacks launched by Russian troops. This resulted in “95% of ready goods and 59% of assets, including buildings, machinery, and tools being destroyed.” Their office buildings and several workshops survived amid this heavy damage.

During the first month following the attack, Ecosoft focused on evacuating their employees and families to safety. They launched their emergency situational team in order to maintain daily contact with their 400 employees; this allows Ecosoft to know where their employees are, what they need, and how Ecosoft could help. While Ecosoft’s call was for employees and their families to evacuate as soon as possible, “many families preferred to stay in their homes or shelters, sometimes without water, electricity, connection, and with limited access to food and medical supplies.”

Planning for the Future
What is in store for Ecosoft’s Kyiv location? Where do they go from here? Is it even possible to make plans with a conflict still ongoing? Mitchenko outlined that the company began launching efforts to restart their operations from Ternopil several weeks after the initial attack. These operations included building water treatment systems, delivering products to their B2B consumers, and more. Mitchenko states that it may be strange to hear, “but consumers and businesses need water filters and consumables even during war times.” Part of Ecosoft’s renewed efforts is providing various volunteer groups with water disinfec­tion and purification equipment for war zones and impacted areas.

Ecosoft has received support from their international customers, as well as BWT group companies. Together, they have managed to relocate families to Europe and provide them with accommo­dations and employment opportunities. Following the exodus of Russian troops from Irpin, attempts to restore operations at this location were made. Mitchenko said that through this struggle “we have found that the people are the company’s major asset and we can recover despite a total loss of machines and tools.” Currently, Ecosoft is operating their production in Ternopil, Irpin, Germany, and their new company location in Belgium, named Ecosoft22 to memorize the year.

Before the war, Ecosoft employed 400 people, though they currently only employ 128. However, they still maintain contact with all 400 employees so that they can offer them jobs at the first moment possible. While Ecosoft has plans in place for the future of their company and their operations in Ukraine, they still have to face the challenge that, regardless of the outcome of this conflict, they will still have “to live with a neighbor that can launch an unprovoked attack on our home at any moment in time.” This will result in complex moral and security challenges to both the personal and corporate lives of Ecosoft employees.

Water Saves Life Ukraine
As a family, and with the support of their BWT colleagues, Ecosoft has launched a charity foundation, Water Saves Life Ukraine. This foundation is currently focused on supporting the colleagues who lost their jobs, homes, or other belongings. Mitchenko said, “we have received powerful support from water colleagues across the globe, particularly the United States.” The foundation has currently raised $300,000 in donations that was allocated to support 250 employees with a three-month allowance, 70 colleagues with support due to the loss of property, and 15 employees with special grants issued to help recover their homes.

While Ecosoft is doing everything in their power to support their colleagues and the citizens of Ukraine, their resources are limited. Every donation to the Water Saves Life Ukraine foundation helps make a difference in the lives of Ecosoft employees and Ukrainian citizens.

Although the Water Saves Life Ukraine foundation was estab­lished as a result of the Russian conflict, Mitchenko envisions a development of the foundation even after the conflict reaches a resolution. Mitchenko said, “it is hard to evaluate the scale of destruction caused to water infrastructures across Ukraine,” and they plan to maintain fundraising efforts in order to continue supplying water and water purification equipment to the most affected areas. When the war comes to an end, Mitchenko believes that “Ukraine will become an area for massive devel­opment of infrastructure projects where Ecosoft can show its best capabilities in supporting the local community.” Ecosoft plans to rebuild and increase their production capacity in order to deliver an even better product portfolio to their customers.

On top of expanding their product portfolio, Ecosoft plans to diversify their production facilities across Europe in order to avoid any potential recurrences like what happened as a result of the attack on Ukraine. Mitchenko believes that the resilience and hardworking ethic of the Ukrainian people would be a valuable asset for the future of the European Union.

If you would like to support to Ecosoft and Ukraine, consider making a donation to the Water Saves Life Ukraine foundation at https://watersaveslife.com/.

Kaitlyn R. Longstaff is associate editor at Water Conditioning & Purification Inter­national magazine. She studied English at Southern New Hampshire University and Publishing at The George Washington University. She can be reached at klongstaff@wcponline.com.