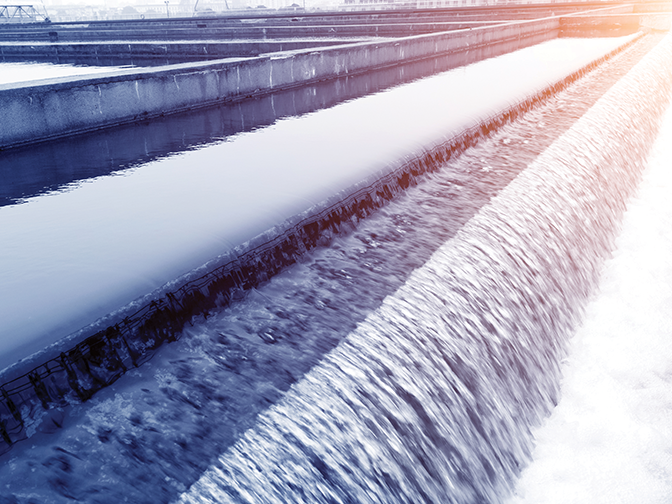 Sanitation is a term that comes to mind frequently when considering safe handling practices with food. It is critically important to handle food properly, such that contamination by foreign matter, especially matter that may contain harmful microorganisms, does not occur. Concepts of sanitation are core to the NSF/ANSI standards for commercial food equipment. Ease of cleaning by requiring surfaces to be non-porous and avoiding designs that allow food particles to become trapped are central to these standards.

When considering requirements of standards for point-of-use (POU) and point-of-entry (POE) drinking water treatment products, sanitation may not be an immediate topic of concern that plays a central role like it does in standards for commercial food equipment. Immediate topics typically include safety of materials in contact with drinking water, structural integrity and minimization of leaks, contaminant reduction claims, and clear communication of product use responsibilities to end users. However, sanitation certainly does play a role in the design and construction of POU and POE drinking water treatment systems. Accordingly, sanitation is addressed through certain requirements of the NSF/ANSI Drinking Water Treatment Unit (DWTU) Standards.

Sanitation Addressed Through Drinking Fountain Outlets
Drinking fountains are one of those aspects of some POU and POE systems that have considerations of sanitation associated with them. Fountain outlets, are by nature, used close to people’s mouths and lips, which presents a concern that microorganisms could be transmitted. And they are outlets exposed to the environment, meaning that they are an avenue for environmental contaminants to potentially enter into the drinking water supply through these outlets.4

The NSF/ANSI DWTU Standards directly address both of these issues through requirements developed to maintain sanitation in light of the potential for contamination from user’s lips and mouths and from the environment. In fact, the standards have been recently updated to clarify these requirements and align them with current plumbing code requirements.

Drinking Fountain Outlets and the NSF/ANSI DWTU Standards
Section 6 of the NSF/ANSI DWTU Standards has for many years included a subsection addressing product water dispensing outlets and drinking fountain outlets. The general guidance relating to product water dispensing outlets has been that they must be directed downward. The reason for this is to prevent discharged water from reentering the outlet and potentially introducing contamination, as well as preventing other environ­mental contaminants from falling into the outlet. The NSF/ANSI DWTU Standards have also included requirements for drinking fountain outlets, basically specifying that a guard must be included that prevents people from touching the outlet with their lips and prevents foreign matter from falling into the outlet.

These recommendations have now been set into specific language that has been balloted through the Joint Committee and approved by the NSF Council of Public Health Consultants, which has confirmed that the language is consistent with best practices for protecting human health. The standards have been updated accordingly. The language is included in Figure 1. 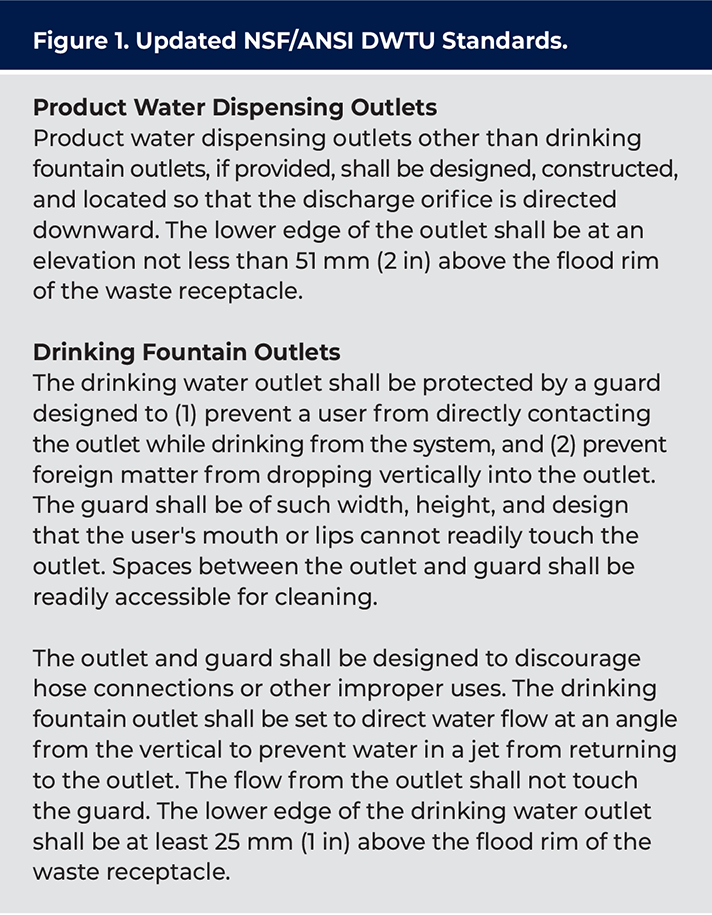 Multi-Attribute Standards
The NSF/ANSI DWTU Standards address several different as­pects of POU and POE drinking water treatment systems. The typical aspects that come to mind quickly include safety of materials in contact with drinking water, structural integrity, contaminant reduction effectiveness, and minimum end user information requirements. However, the standards actually go beyond these important elements to also cover sanitation. There are multiple sanitation requirements included in these standards, one of which is requirements for drinking fountain outlets to be designed in such a way to minimize the potential for contamination in addition to being functional for drinking fountain purposes. By including these sanitation requirements, in addition to the other important areas addressed by the standards, protection of human health is enhanced, thus benefitting manufacturers of the products, end users, and regulators who utilize these standards.

About the author
Rick Andrew is NSF’s Director of Global Business Development–Water Systems. Previously, he served as General Manager of NSF’s Drinking Water Treatment Units (POU/POE), ERS (Protocols) and Biosafety Cabinetry Programs. Andrew has a Bachelor’s Degree in chemistry and an MBA from the University of Michigan. He can be reached at (800) NSF-MARK or email: [email protected]