Are We Executing WASH (Water, Sanitation, and Hygiene) with a Big W and Little s? 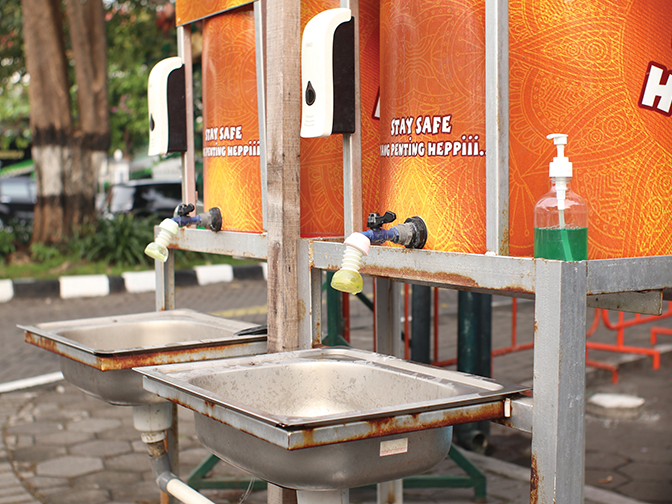 Maybe you know that Earth Day is April 22, and you celebrate World Water Day on March 22. But did you know that November 19 is World Toilet Day? Or that Global Handwashing Day is October 15? And that we are about halfway through the Water Action Decade (Figure 1)? Even for professionals in the water sector, these initiatives may not be well known. Perhaps this is because with a day dedicated to nearly everything (seriously, there is an unofficial National Lumpy Rug Day?!), it is too unwieldy to pay attention. Or could it be that earth and water are simply sexier topics than toilets and handwashing?

My friend Mike, a dedicated humanitarian engineer who has positively influenced scores of people around the world, recently remarked that it is wonderful that non-governmental organi­zations such as Engineers Without Borders, Water for People, Water.org, and numerous others are working to get drinking water to underserved populations; but there can be a tendency to focus on the water (a big W) without proportionate emphasis on the downstream sanitation (a little s). Using Mike’s words as an inspiration to ponder the long list of celebrities, musicians, actors, and others promoting water campaigns, it indeed seems that it is much rarer for individuals to lend their names to campaigns for sanitary advances.[1] Are we then effectively rolling out WASH (water, sanitation, and hygiene) as WAsH (big W, little s)?

The WASH acronym was broadly adopted in the early 2000s, and clearly recognizes the importance of addressing these interrelated concepts together. However, in public discourse, we often focus on the cleaner water topics, using terms such as water rates and water connections, (which also typically encompass wastewater rates and connections) as well as water-related diseases (although many derive from inadequate sanitation practices). In the last couple of years, discussions about hand hygiene and implementation of such practices rose to a pinnacle of prominence in response to the COVID-19 pandemic.[2] Yet, we still “don’t mention the s**t.”[1] Black and Fawcett (2008)[1] penned a convincing argument that we must dismantle this last great taboo and talk about human waste in order to better address today’s sanitary crisis. Let’s do precisely that as we explore WASH efforts here.

Access to safe water and sanitation are recognized by the UN as human rights, reflecting their fundamental nature in every person’s life. Lack of WASH access has devastating health implications, especially among young children. For example, there were an estimated 829,000 WASH-attributable deaths and 49.8 million disability-adjusted life years (DALYs) from diarrheal diseases in 2016 alone.[3] Not only is water essential to health, but it is also critical for the realization of other human rights, with direct effects on poverty reduction, food security, peace and human rights, ecosystems, and education.[4] Stemming from its influence across sectors, each dollar invested in WASH yields an average of four dollars of benefits.[5]

Figure 2 illustrates “safely managed services,” as specified by the UN’s Sustainable Development Goals (SDGs). The World Health Organization (WHO) and the United Nations Children’s Fund (UNICEF) define safely managed drinking water as an improved water source that is accessible on the premise, available when needed, and free from fecal and priority chemical con­tamination. Alternately, basic water services are designated as improved facilities that are available within 30 minutes of round-trip collection time. Similarly, safely managed sanitation refers to an improved facility not shared with other households, where excreta is safely disposed in situ or transported and treated offsite, and a handwashing facility with soap and water is present. Basic sanitation consists of a private, improved facility that separates excreta from human contact.[5]

By 2030, the SDGs target 100% coverage for the water and sanitation categories shown in Figure 3. To meet these targets, the rate of progress in the first five years of the SDG’s 2015 – 2030 timeframe would need to quadruple (10-fold increase in the least developed countries) in future years.[2] Thus, without substantial increases in the current rates of change, the targets will not be met within the 2030 timeframe.[4]

Further confounding future advancements, developing countries have a 61% funding gap between available funding and identified needs to achieve national water, sanitation, and hygiene targets.[4] This financial disparity particularly impacts economically dis­advantaged and otherwise vulnerable populations, including isolated communities, poor households, those with disabilities, and women and girls.[5] This underscores the importance of the UN’s Leave No One Behind approach, which “entails reaching the poorest of the poor and seeks to combat discrimination and rising inequalities.”[6] 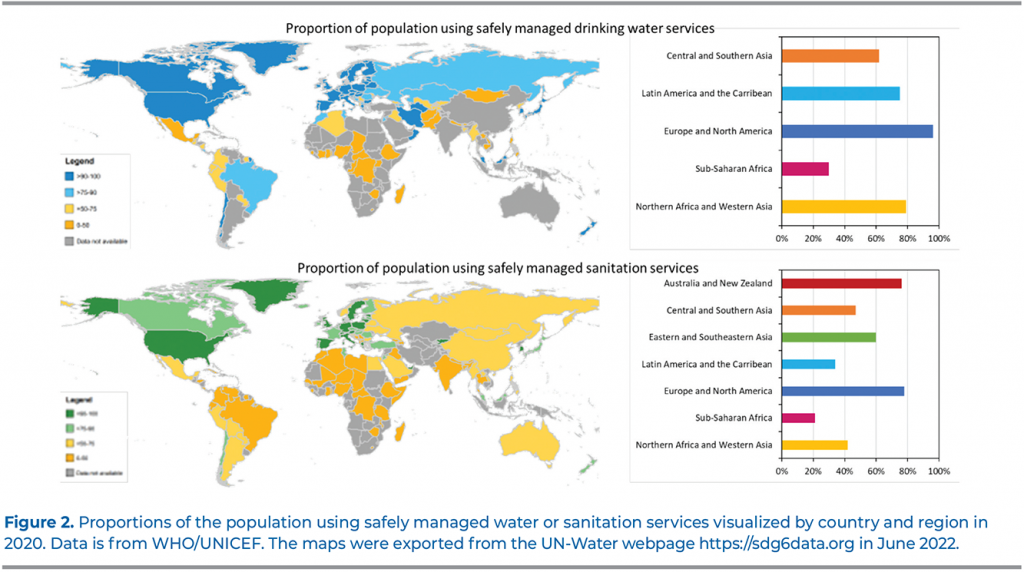 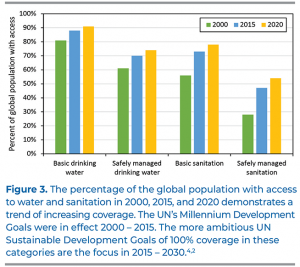 Highly relevant to the Leave No One Behind framework, 47% of schools worldwide lack handwashing facilities with soap and water.[4] Inadequate WASH facilities at schools serve as a barrier to children’s attendance and performance in schools, particularly for post-menarche girls if they are unable to manage their menstrual hygiene needs in a dignified manner.[5] Thus, efforts to install WASH facilities at schools, such as the Engineers Without Borders project shown in Figure 4, are critical in supporting a number of the UN’s SDGs. 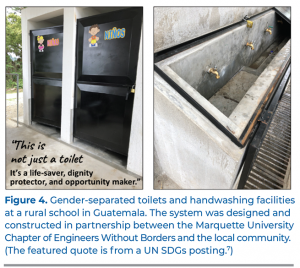 Although global sanitation coverage continues to lag behind drinking water (Figure 3), it is imperative to keep in mind that as homes and institutions are increasingly connected to safely managed water systems, we must also safely manage the in­evitable increase in wastewater flows to avoid exacerbating human exposure to harmful contaminants. Taking a lesson from the past, as the sanitary revolution of the 19th century progressed and flush toilets replaced the previous ‘dry’ systems (e.g., earth closets, chamber pots, privies, and outhouses), realization of the important challenge of lagging sewerage infrastructure came to light.[1] For example, the Great Stink in London in 1858 spurred development of a sewerage system to handle the increased volumes of flushed wastes that overflowed the under-designed cesspools of the time.[1] This also highlights that water-borne sewerage may not be the best choice in all settings, particularly considering non-industrialized, low-income communities in today’s world where alternative safely managed sanitation systems may offer a more sustainable choice.[1] Embracing that there is no one-size-fits all solution, the increases in sanitation shown in Figure 3 include greater increases in on-site systems (e.g., septic tanks and improved latrines, which are classified as safely managed if they are improved, not shared, and prevent unsafe exposure along the sanitation chain) compared to water-borne sewer connections.[2]

In the words of His Royal Highness Prince Willem-Alexander, Chairperson of the UN Secretary General’s Advisory Board on Water and Sanitation, “Too often, the ‘sanitation’ component of ‘water and sanitation services’ is referred to only in passing, as if clean water alone will solve the personal environmental crisis confronting the world’s poorest citizens.”[1] Moving forward, let us not bury the poo in the euphemisms often reserved for the topic,[1] but instead maintain an open dialogue and course of action that proportionally emphasizes WASH’s critical S component.