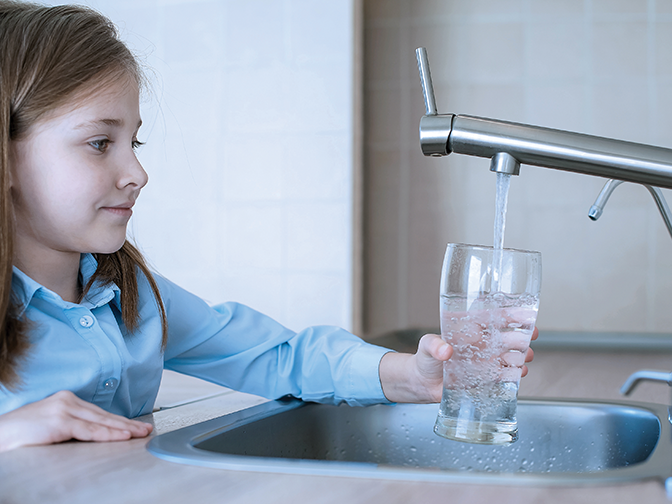 
On June 26, 2001, the U.S. Food and Drug Administration (FDA) formally approved the use of ozone as an Antimicrobial Agent for the Treatment, Storage, and Processing of Foods in Gas and Aqueous Phases. Since then, ozone has rapidly gained public acceptance in the U.S. especially with the introduction of modern ozone generation equipment able to properly control dosage.

Ozone water treatment technology has been used for many years as a powerful disinfectant in municipal water treatment facilities and commercial applications. The ability to reduce the need for chemical introduction into the water supply has been an added benefit. The first drinking water plant utilizing this technology began operations in Nice, France, dating back to 1906.[1]

A number of public surface water supplies containing dangerous Cryptosporidium and Giardia now use ozone water treatment systems as primary disinfection as chlorine does not penetrate the protective shells of these protozoa rendering this approach ineffective. Another benefit of ozone is it does not create poten­tially dangerous trihalomethanes as a byproduct, as chlorine does.

Ozone water disinfection in the residential water treatment industry is a more recent development. Ozone is much more effective at killing nearly all viruses, bacteria, and parasites, even those resistant to chlorine. Ozone is harmless when used in water as it will eventually break down into oxygen (O₂), leaving no chemical residue. Ozone systems are also excellent for odor reduction and can be far more effective than traditional air-based systems. It may also provide a less expensive water treatment alternative in certain circumstances. 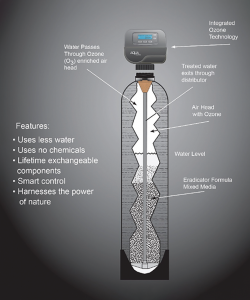 The formation of oxygen into ozone occurs with the use of energy. In general, an ozone water treatment system includes passing ambient air through a high-voltage electric discharge (inside a sealed tube, i.e., corona discharge). The ozone is generated from an electrical arc inside a corona discharge tube, which is activated by a relay-controlled power supply mounted within the system. When the air is exposed to this arcing electrical current, the oxygen in that air (O₂) is converted to ozone (O₃), a powerful and rapid-acting oxidant. In cases of moderate to high humidity, an air dryer, which reduces humidity, can be added to the control valve to increase the O₃ production and quality. Once the ozone has done its job inside the filtration system, it converts back to oxygen (O₂). Ozone systems may also contain a media bed to accomplish more than oxidation.[2]

The positive attributes of an ozone system are:

Ozone rapidly reacts with bacteria, viruses, and proto­zoans (Cryptosporidium, Giardia) and is effective over a wide pH range. It has stronger germicidal properties than chlorination or ultraviolet (UV) light.[2] 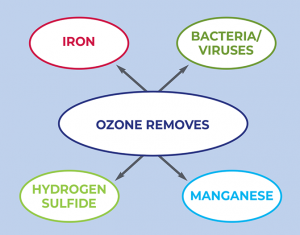 A common water quality problem experienced around the country is hydrogen sulfide (H₂S). It can create a very strong rotten egg smell, is corrosive to metals, and can also tarnish silver. Black and/or yellow staining on fixtures is another potential effect. At lower levels, hydrogen sulfide can often be effectively treated with air induction systems, activated carbon, birm, pyrolox, or manganese greensand. At higher levels, these methods are often ineffective in applications where the power of ozone can triumph.

An unintended consequence of air induction may be the elevation of some odor issues in residences with smells other than hydrogen sulfide. The air induction increases the oxygen level in the water, enabling some forms of bacteria to thrive and produce even greater odor levels. What stimulates growth in different types of bacteria can vary quite widely. Some thrive in a low oxygen environment while others benefit from it. Bacteria display the widest variation of all organisms in their capacity to inhabit and adapt to different living environments.

In circumstances where other types of water filtration equipment are required for removing contaminants in the water supply, such as hardness or others, ozone water treatment is best installed last in line to kill any bacteria that may be hiding in the plumbing lines or other water treatment equipment.

The Ability to Solve More Than One Problem
Water treatment professionals may encounter situations where the water has the following combined issues:

By installing an ozone water treatment system, the proprietary media in the tank can raise the pH high enough to effectively oxidize and remove iron and manganese while also eliminating the rotten egg smell. The increase in pH is proportional to the incoming water iron and manganese levels. The higher these levels, the higher the spike in pH level. Additionally, the cost of this system could potentially save your customer a significant amount of money, while making you more competitive.

Ozone With Different Media Beds
Ozone systems can contain different media beds to match specific water quality issues. For specific situations, it’s best to speak with your manufacturer or supplier about which media makes the most sense. For example, the following medias have been used to address the conditions described:

Possible Disadvantages of Ozone Treatment
Ozone is potentially corrosive, thus requiring corrosion-resistant materials to be used in the manufacturing of the system itself. Some manufacturers have recently converted their standard air system to use ozone generators. If care was not taken by the manufacturer in choosing the materials used to inject the ozone, installing dealers could potentially be dealing with problems and leaks associated with components failing due to ozone deterioration. Check the materials used.

Ozonated water may first appear cloudy in a glass due to the increased oxygenation created. The same as any water containing air bubbles, they will rise to the top of the glass and eventually dissipate. Customers should be made aware of this ahead of time to assuage concerns.

There are specific situations where ozone simply works where other traditional technologies do not. In others, ozone will accomplish what the other approaches will with a simpler, cleaner, and potentially less costly result. It’s advent into the residential water treatment industry has provided us with another tool to address water quality issues.

Norm Marowitz has been in the water filtration industry since 1995, previously as the President of Atlas Watersystems, Inc. of Waltham, MA; President of Region-X, Inc.; and currently as a board member and advisor with H2O Care, Inc. He has an MBA from Boston College and practiced as a CPA in his early career with experience in several other industries.

Ryan Gritzke has been a technical sales consultant for H2O Care, Inc. since 2016 and can be reached at rgritzke@h2ocare.com. Prior to this, he

worked for Environmental Testing Laboratories as a field sampling technician and a QAQC and data reporter for 10 years. Gritzke was a Fisheries Observer for the National Oceanographic and Atmospheric Administration and the National Marine Fisheries Service for three years. He graduated from Roger Williams University in Rhode Island with a degree in Marine Biology.