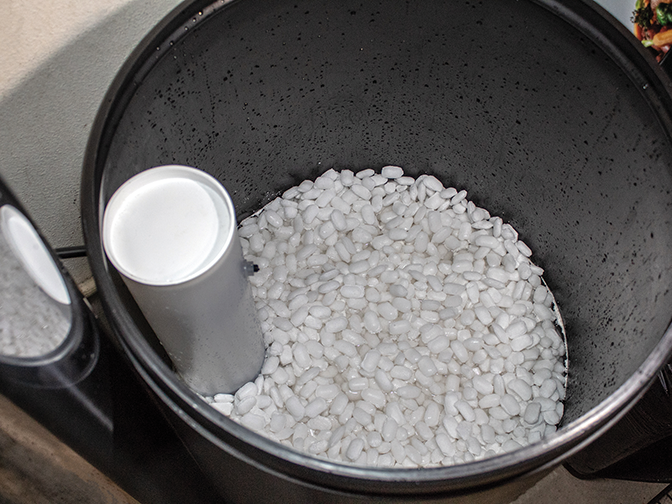 Introduction
As the world struggles with climate change and unprecedented weather events, our society is slowly beginning to recognize the severity of the situation. Young people now understand and use terms like sustainability and circular economy while demonstrating a commitment to addressing these issues. Concerns such as water conservation and pollution control are gaining traction and the environment is the better for it.

Pollution regulations have been in place for over 60 years, on both the state and national level; however, we feel that the growing awareness of challenges to the health of our planet will result in even greater regulatory activity. A significant source of pollution is chloride discharge from water softener regeneration activities. The sodium ion exchange process for removing hardness (and to a limited extent iron and manganese) from water supplies is used by close to 100 percent of the residential units in place today. This process primarily utilizes sodium chloride, or occasionally, when cost is not an issue, potassium chloride as the chemical required to replace hardness ions on the softening resin. To reverse the chemical ‘preference’ of hardness attachment to the resin, a high concentration of sodium ion is necessary, hence the discharge issue. The US EPA National Secondary Standard limit for chloride concentration in drinking water is 250 mg/L.

Numerous states have chosen to address chloride contamination and have set their own discharge standards. For example, the Minnesota Pollution Control Agency has set a water quality standard value for chloride of 230 mg/L based on effects on aquatic life. Some municipalities have limited the discharge of water softener regenerant into municipal sewer systems and California has insti­tuted onerous restrictions on the use of residential water softeners.

It is estimated that there are over 10 million residential and some 60,000 commercial/industrial water softeners in the US today. Since 2020, there has been exceptional growth of residential softeners in North America (over 20 percent per year); however, a realistic sustainable annual growth rate appears to be 8-10 percent. There are several no-salt conditioners on the market, but for a number of reasons, the industry has been slow to embrace them. The International Association of Plumbing & Mechanical Officials (IAPMO) has formed a Technical Subcommittee (Z601) to develop a test/performance standard on scale reduction devices.

Background
Traditional water softening is a batch process in that when the resin has adsorbed its capacity of cations and is exhausted, the unit must be taken off-line and the resin regenerated with salt brine. This process involves running a high concentration of sodium chloride (approximately 10-percent brine solution) through the resin, which strips off the adsorbed hardness ions and replaces them with sodium ions. This is accomplished automatically, initiated by a volume controller (self-regenerating). It is important to remember that the chloride ion does not take part in this chemical reaction, but is part of the regeneration chemical, sodium, or potassium chloride. On the other hand, because the chloride ion in high concentrations is corrosive and otherwise detrimental to the environment, it is the pollutant of concern. The excess brine goes down the drain with the removed hardness ions.

The issue
Both sodium and potassium chloride are highly soluble and, as a result, are difficult to remove from water without applying sophisticated technologies such as reverse osmosis or evaporation. Although reverse osmosis is widely used for desalting seawater (with the primary contaminant sodium chloride), it is not practical for treating discharged water contaminated with these salts, which are normally directed to the municipal wastewater treatment system. The very high energy costs associated with evaporation also eliminates this technology from consideration. The most practical solution is to remove the chloride salts from the regenerant waste before discharge and recycle them as part of the brine solution. To do this, the hardness ions must be first separated from the salt solution.

The technology
Nanofiltration (NF) membranes, are designed to distinguish between the valance of ionic components, rejecting multivalent ions (e.g., calcium and magnesium), while allowing monovalent ions (e.g., sodium, potassium and chloride) to pass through into the permeate stream. We have utilized this membrane chemistry to create a new, patented treatment approach to recover and reuse most of the brine from the water softening regeneration process. It utilizes nanofiltration technology to separate hardness ions from the brine solution, discharging the hardness to the drain and returning recovered sodium/potassium chloride to the brine tank for reuse.

The treatment system utilizes a 20-30 gallon reclaim tank to directly collect the softener regenerant during the regeneration event. A 1,000-psig pump directs this into the NF membrane with the concentrate (mainly hardness ions) discharged to drain and the permeate (sodium/potassium chloride) returned directly to the brine tank for reuse. Testing has shown that a minimum of 75 percent of the sodium/potassium chloride that would normally be discharged can be recovered and reused. In addition to the significant reduction in chloride pollution, this process provides:

Following is a detailed description of the treatment process: 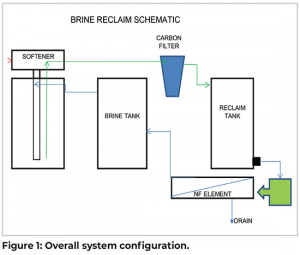 Conclusion
An IAPMO Technical Subcommittee has been formed to develop a test/performance standard (ASSE-1088) to address performance requirements for water softener regeneration – brine reclaim. The water conditioning industry thrives on innovation and new developments. This is no exception. The completion of this standard should establish the credibility to provide incentive for state and local regulators to address this technology as an innovative approach to mitigate the growing chloride pollution problem, a black mark on our industry, known for its environmentally advanced technologies.

Peter Cartwright entered the water purification and wastewater treatment industry in 1974 and has had his own consulting engineering firm since 1980. He has a degree in chemical engineering from the University of Minnesota and is a registered Professional Engineer in that state. Cartwright has provided consulting services to more than 250 clients globally. He has authored over 300 articles, written several book chapters, presented over 300 lectures in conferences around the world and is the recipient of several patents. Cartwright also provides extensive expert witness testimony and technology training courses. He is on numerous editorial advisory boards and technical review committees of several trade publications and a frequent lecturer in numerous technical conferences globally. Cartwright is a recipient of both the Award of Merit and Lifetime Member Award from the Water Quality Association and is the Technical Consultant for the Canadian Water Quality Association. He was the 2016 McEllhiney Distinguished lecturer for the National Ground Water Research and Educational Foundation and gave over 35 lectures throughout the world on groundwater contaminant mitigation.Cartwright can be reached at peterscartwright@gmail.com or visit his website, www.cartwright-consulting.com

Tom Cartwright, former Global Business Manager for GE Water, is owner and Chief Science Officer of Envi H2O/Safeway Water Technologies, a Florida-based water treatment company. With over 38 years in water treatment, he has lectured and provided training on water treatment equipment in 43 countries. Cartwright has 15 patents to date and is a published author – with numerous technical articles, as well as one fictional novel.