Brine Reuse with the Elution Curve 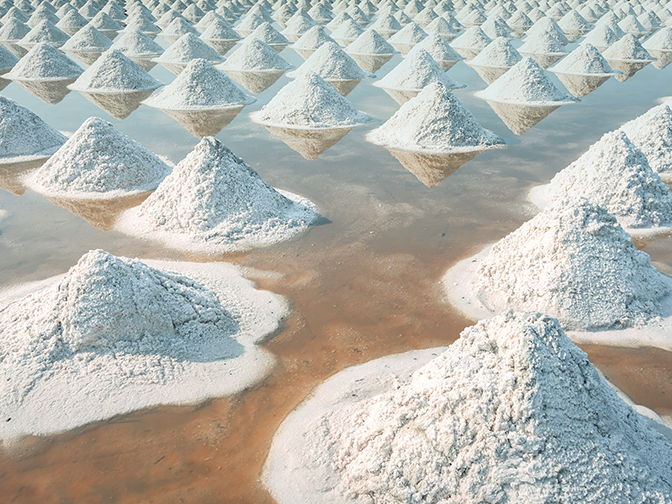 By By Lawrence R. ‘Larry’ Zinser


The regeneration of cation exchange resin in water softeners is an extremely inefficient process. The purpose of this article is to describe the efficacy of brine reuse as a method to improve ef­ficiency and the use of an elution curve to illustrate the process.

The only reason why the water softening process works is that the ion exchange sites on the cation resin have a relatively high affinity for the hardness ions in water. Since we start with cation resin with a less desirable ion (sodium) at those sites, the water softener resin will exchange the sodium ions for the hardness ions in the ion exchange process. But after the resin is saturated with the hardness ions, those ions must be replaced with the original sodium ions. The most common source for the sodium is from a concentrated solution of sodium chloride, called brine. This brining process is the source of the inefficiency in water softeners.

During the brine and rinse cycle of regeneration, the ion exchange resin is flooded with sodium ions. Flooded because otherwise, the ion exchange sites on the resin would not release the hardness ions for sodium. But since only the hardness sites on the resin exchange for sodium, the remaining sodium ions and all of the chloride ions are discharged as waste. This high-salt waste affects the municipal treatment plants or the soil surrounding septic systems, depending upon the sanitary sewer situation.

Consequently, the discharge of brine has been a target of both municipal and environmental concern. Around the beginning of this century, the water softening technology also improved dramatically with the use of digital electronic timers and advances in injector technology. Today the brine and rinse cycle can be closely controlled. The efficiency of brining is a function of the salt dosage that is applied during the regeneration process. Figure 1[1] provides a description of the relationship between brine dosage, in pounds of salt per cubic foot of softening resin and the resulting softening capacity achieved by the regeneration. 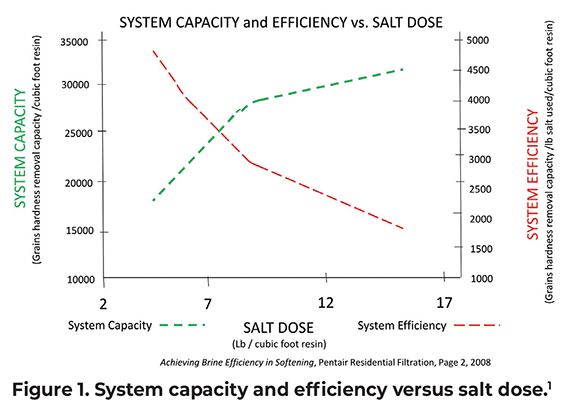 Prior to 2000, the standard salt dosage was 15 pounds (6.80 kilo­grams) of salt per cubic foot of resin, which is relatively inefficient. The new technology allowed the selection of specific salt dosages. This potential for improvement efficiency prompted the National Sanitation Foundation to develop NSF 44 as a rating system for water softeners around 1996, aimed at rating softeners based upon how much salt is sent to drain for every grain of hardness that has been removed during regeneration.

Today’s efficiency standard is 4,000 grains of capacity achieved for every pound of salt sent to drain and the typical efficient salt dosage is about seven pounds (3.17 kilograms) of salt. The brine and rinse cycle is the key part of regeneration during which the excessive salt is released to drain. In an effort to increase the salt discharge efficiency, a number of original equipment manufac­turers (OEMs) have ventured into the science of brine reuse, essentially returning a selected portion of the discharge during the brine and rinse cycle back to the brine tank so that the brine can be reused on subsequent regenerations. In order to determine what portion of the brine and rinse discharge to select, an elution curve was created for the cycle.

The elution curve is a track of the salt concentration of the cycle effluent over time. The elution curve is created by tapping into the water softener drain at regular intervals during the brine and rinse cycle, and measuring the salt concentration with a salt hydrometer. The time of each tapped sample is recorded by a stopwatch. Drain water samples are collected about every two minutes during the brine and rinse cycle, and then plotted as a graph.

Figure 2 shows a normal elution curve. At the beginning of the cycle, there is a delay in the appearance of salt to drain because the brine mixture created by the injector must flow down through the resin bed and up the riser to the drain port. Once the brine reaches the drain, its concentration will be about 8-10 percent, since it was diluted by about half at the injector. The rise in salt concentration should be very sharp. This concentration should remain fairly constant through the entire brine and rinse cycle until all of the salt has been rinsed from the resin bed. As long as the rinse cycle is long enough, the concentration will return to the starting level by the end of the cycle. 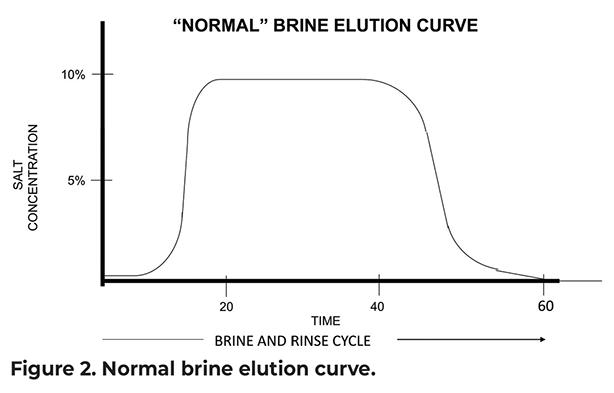 An analysis of this data alone can be instructive regarding the effectiveness of the brine and rinse cycle. For example, if the salt level rises too early on the curve, this could be an indication of channeling along the riser or an insufficient backwash. If the curve is too low, this indicates an insufficient brine draw. Brine reuse consists in the use of a two-way valve on the drain port of the softener valve. For brine reuse, a specific time window is selected from the elution curve. During that preset timed period, the two-way valve redirects the drain flow back into the brine tank. The brine flow during this period is the reused brine. This reused brine is returned to the brine tank where it dissolves more salt until it becomes saturated and ready for the next regeneration cycle.

If we intend to reuse brine however, there are other important factors to consider. First, this cycle has two steps: brine draw and slow rinse, as seen on Figure 3. During brine draw, the rate of flow to drain will be about twice that of the rinse-only phase. This is because the ball check valve in the brine tank activates after the predetermined brine dosage (volume) has been reached. Second, if we are to redirect the drain effluent back to the brine tank, this cannot be done until after the ball check. Otherwise the brine will continue to recycle between the brine tank and the resin bed. This limits the potential period when we can redirect the drain back to the brine tank and also the volume of reused brine because the drain flow rate is lower during slow rinse. 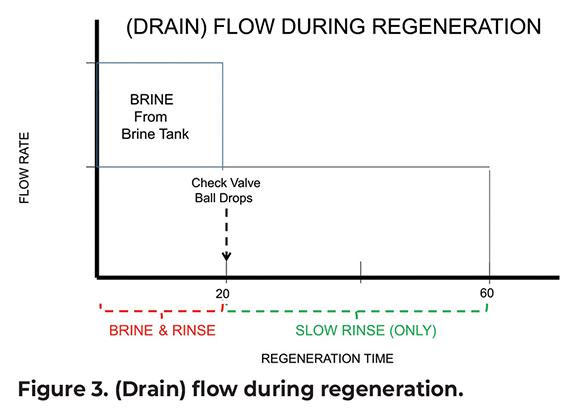 As would be expected, some of the drain flow during the brine and rinse cycle will contain the hardness which is being exchanged for sodium on the resin. To further refine the elution curve, the hardness level at each sample can be determined and plotted on the elution curve. Although there will be some variation based upon the fresh water analysis, the typical hardness content is relatively low (less than 0.1 percent of the sodium) during the rinse-only step. These two factors may be added to the elution curve as in Figure 4. 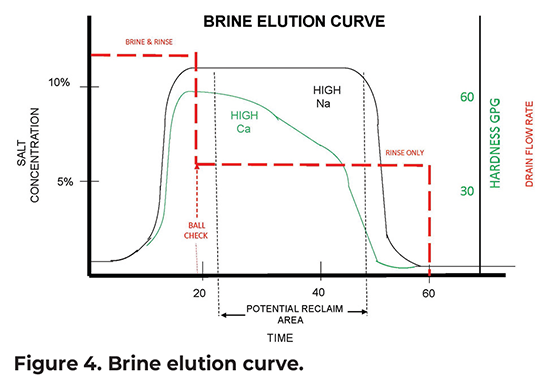 Last, and most important, there is a lower limit to the salt dosage which can be used for brine reuse. This is because at higher salt efficiencies, say seven pounds per cubic foot, there will not be enough salt available in the drain flow to send back to the brine tank. Consequently, higher salt dosages are used, typically in the range of 10 to 15 pounds (4.53 to 6.80 kilograms) per cubic foot.

Conclusion
During testing that I have conducted over a year’s period of time, the best result I achieved was reusing 20-23 percent of the total salt to drain. Some OEMs have claimed higher percentages, ranging up to 35 percent, on commercial water softeners. But even if 35 percent is achievable, if the starting point regeneration dosage is at 17 pounds (7.71 kilograms) per cubic foot (2,500 grains capacity on Figure 1), then the salt-use efficiency would only be increased by another 500 or 600 grains. This is well below the efficiency achieved by starting with the lower salt dosage. Salt reuse strategy cannot compete in salt efficiency with currently available injector and electronic technology for most water treatment applications. The only potential exceptions may be those applications where a high salt dosage is required, such as high iron content.

Rather than redirecting the post ball check brine flow back into the system brine tank, what if all of the high-salt drain flow across the elution curve is directed to a separate container and then that solution is processed with membrane technology to re-concentrate the brine for the next regeneration? This is the intent of current efforts by the American Society of Sanitation Engineers to develop a new standard, ASSE-1088, which will focus upon performance standards for brine reuse.

Following an education in chemistry (BS Degree) at Georgetown University, graduate work at Wayne State University and a 27-year career with the US Marine Corps, Lawrence R. ‘Larry’ Zinser has served an additional 27 years in design, manufacture, education and troubleshooting of residential, commercial and industrial water treatment systems. He has provided numerous technical courses throughout the country and internationally, which have been accredited by the Water Quality Association, the Pennsylvania, North Carolina, Maryland, Virginia, and Delaware Ground Water Associations, the American Nephrology Nurses Association and the Lehigh-Carbon County Community College. Zinser can be reached at larry@masterwater.com or cell phone, (215) 421-7115.