To Solve Global Water Scarcity, We Need to Get More Serious About Desalination 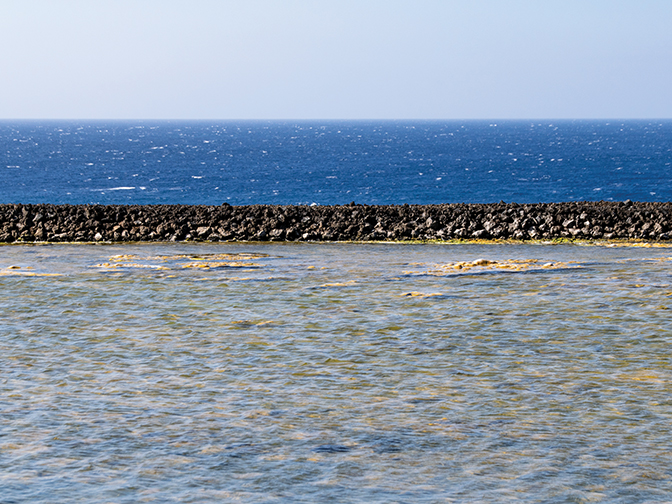 As the climate warms, many of Earth’s arid regions will get even drier, while human populations and their water needs grow. Up to 60 percent of the global population may face severe water scarcity by 2025. Desalination has been around for decades and is used to make both seawater and salty groundwater drinkable. But scientists think that it will become increasingly important in a warmer, drier future. In a recent world review, researchers stated that “conventional sources of water such as rainfall, snowmelt and river runoff captured in lakes, rivers, and aquifers are no longer sufficient to meet human demands in water-scarce areas.” 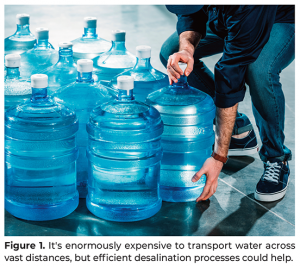 Why seawater desalination?
Seas have ample water to support the human race for thousands of years. Naturally, it can be converted via seawater desalination to be used for drinking. More than that, this particular option offers so many opportunities in resolving the crisis.

Desalination is a growing trend. It has given hope to countries where the geography is not naturally blessed with rivers and reservoirs. People have begun irrigation and agriculture thanks to the abundant supply and RO makes the process effective. Still, we have miles to go in technology regarding its environmental effects.

Seawater reverse osmosis technology (SWRO)
Seawater reverse osmosis technology is fully mature at the industrial scale, which has been installed in nearly all coastal areas around the world with limited natural hydrological resources. There are many technological advances and innovations designed to improve the reverse osmosis desalination process, in particular, to reduce the process energy consumption, as well as to minimize the harmful effects of scaling and fouling on membranes and to obtain higher water flux membranes.

The key technology in the desalination process is reverse osmosis. In this process sea water is forced against semi-permeable membranes under pressure in a continuous flow condition. The high salt content of sea water requires that the operating pressure for reverse osmosis must be between 60-70 (870 -1,015 psi) bar. As the water permeates through the membrane most of the dissolved impurities removed and 99.5 percent of the total salt is removed. The impurities are left behind in the flowing water and the concentrated stream from the membranes is discharged to the ocean. The design of the complete system must optimize the flows, the area of the membranes and other conditions to keep the system operation at the highest efficiency possible. 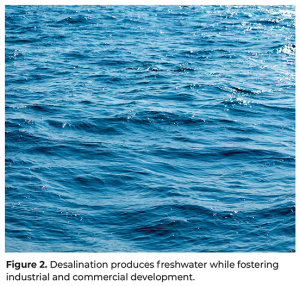 Desalination technology has been around for the better part of the last century. Many countries, municipalities, armed services, and ships have the need to produce fresh water by desalination because of their lack of natural sources of fresh water. Desalination technology has brought freshwater and industrial and commercial development to areas of the world that otherwise might have remained unproductive. Not only has development been enhanced by this technology but, more importantly, the health and welfare of many people have been improved by the supply of sanitary fresh water supplies.

In the late 1960s, reverse osmosis (RO) was developed for desalting saline water supplies. This process is based on the principal of osmosis and requires a membrane barrier to separate salts from water. Because reverse osmosis technology required considerably less energy to operate than distillation, it was considered to be the technology that would make desalination much more attainable to the world’s water scarce areas. Indeed, RO for water purification has become widely utilized not just for drinking water applications but for high purity industrial process applications such as manufacturing of electronic components, pharmaceuticals, chemicals, boiler feedwater, medical applications and industrial and municipal wastewater recovery systems as well.

In the early days of RO commercialization, however, historical design and operations information wasn’t available and, as with any new technology, many problems arose. Therefore, in the initial years of RO membrane plant application, many owners and operators experienced costly downtime attributable to lack of applications experience by engineers, vendors, etc. As both membranes and applications engineering became more advanced with time, RO systems were installed and operated with greater success. Today, with the necessary understanding of feed water source conditions, pre-treatment needs and high-quality system engineering, RO can be applied to almost any ground or surface water desalination/purification application. Advancements in membrane manufacturing and applications engineering have made RO the leading process in the worldwide water.

Environmental concerns of desalinating seawater using reverse osmosis
The RO method is the preferred option in modern times, especially when fossil fuels are becoming expensive. RO has other positives such as better efficiency (30–50 percent) when compared with distillation type plants (10–30 percent). RO membranes, however, are susceptible to fouling and scaling and as such, they need to be cleaned regularly with chemicals that may be toxic to receiving waters. The input and output water in desalination plants must be pre and post treated, respectively. This involves treating for pH, coagulants, Cl, Cu, organics, CO2, H2S and hypoxia. The byproduct of the plant is mainly brine with concentration (at times) twice that of seawater. This discharge also includes traces of various chemicals used in cleaning, including any anticorrosion products used in the plant and must be treated to acceptable levels of each chemical before discharge, but acceptable levels vary depending on receiving waters and state regulations.

The discharge of the brine is usually done by a long pipe far into the sea or at the coastline. Either way the high density of the discharge reaches the bottom layers of receiving waters and may affect marine life, particularly at the bottom layers or boundaries. The longer-term effects of such discharge concentrate has not been documented but it is possible that small traces of toxic substances used in the cleaning of RO membranes may be harmful to marine life and ecosystem.

A lot of these solutions involve management of the available resources rather than just saving up. These solutions may not be possible for arid regions but there is one other solution that can be used by almost every region. Shortage of the most important resource of all has driven a lot of countries to seek technological help from the brilliant minds in the world. And that is how the idea of conversion of seawater into freshwater came into existence.

Desalination industry enjoys growth spurt as water scarcity starts to bite
The growth of the market for desalination reflects the fact that coastal communities are increasingly turning to the sea to meet their drinking water needs, while inland there is a tendency for groundwater to become increasingly brackish over time. Around 60 percent of desalination capacity treats seawater; the remainder treats brackish and less saline feedwater.