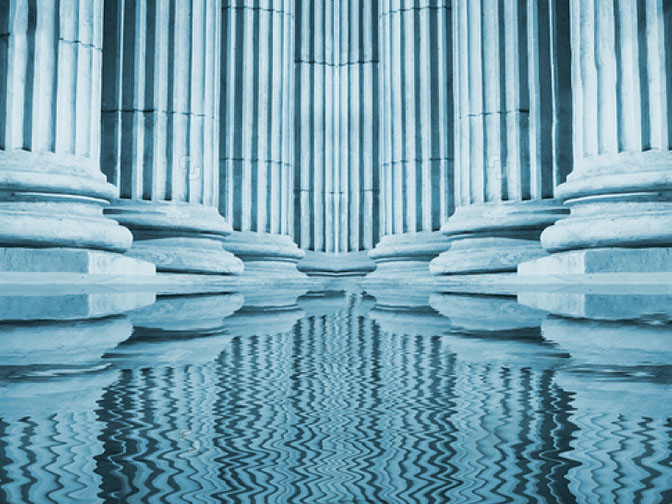 Since the Clean Water Act (CWA) was established nearly 50 years ago in 1972, the federal government has struggled to define the waters under CWA’s regulatory jurisdiction, known as the Waters of the United States or WOTUS, leading to significant challenges with applying regulations. The legislation is written such that US EPA and the US Army Corps of Engineers (USACE) have the authority to define and re-define WOTUS, leading to a political seesaw on how robustly the CWA is implemented, depending on who is in the White House.

This ambiguity has put defining WOTUS before the Supreme Court on three separate occasions, most recently in the landmark 2006 case of Rapanos vs. United States. In Rapanos, the court produced an updated interpretation of the definition, deciding 4-1-4 via a 4-justice plurality led by Justice Antonin Scalia and a concurring opinion by Justice Anthony Kennedy, to tighten which waters could be under CWA’s jurisdiction.

The plurality opinion stated that CWA could be applied to ‘relatively permanent, standing, or continuously flowing bodies of water’ including streams, rivers, lakes and wetlands that have a ‘continuous surface connection’ to other waters, pursuant to the CWA. Kennedy’s concurring opinion left the definition slightly more open-ended, including water bodies possessing ‘a significant nexus’ to other waters pursuant to the CWA. These seemingly minor differences in wording have given Republican and Democratic administrations grounds to make major adjustments to CWA’s jurisdiction. Who knew defining a water could be so difficult?

Recent changes under Presidents Obama and Trump
In 2015, the Obama administration redefined WOTUS under its Clean Water Rule, which more closely adhered to Justice Kennedy’s ‘significant nexus’ assessment and greatly broadened the definition of WOTUS, particularly by expanding CWA jurisdiction over wetlands and streams. This rulemaking was immediately met with a flurry of legal challenges across the country, causing interpretation of WOTUS to be handled differently based on the state and hamstringing regulatory implementation.

The Trump administration then repealed and redefined Obama’s Clean Water Rule with the Navigable Waters Protection Rule (NPWR), which is more aligned with Justice Scalia’s plurality opinion in Rapanos. Key provisions of NPWR include:

These changes reduced jurisdictional wetlands by 51 percent and streams by 18 percent1 and were immediately met with its own flurry of legal challenges across the country.

Clean Water for All Act
Although changes to WOTUS are more commonly made by the executive branch, Congress also has the authority enact legislation aiming to more clearly define the jurisdictional reach of the Clean Water Act and members of both parties introduced legislation that would do just that during both the Obama and Trump eras. One such bill introduced during the 116th Congress by Reps. Peter DeFazio and Grace Napolitano, leaders of the House Transportation and Infrastructure Committee, was H.R. 6745 – the Clean Water for All (CWFA) Act.

CWFA sought to rebuff the Trump administration’s changes and broaden the definition of WOTUS to include water bodies that affect the “physical, chemical, or biological integrity of traditionally navigable and interstate waters.” The bill also aimed to focus the definition more towards the human impact of water quality to “prevent any degradation of surface water quality, increased contaminant levels in drinking water sources, increased flooding-related risks to human life or property, or disproportionate impacts on minority or low-income populations.”

With Republican control over the White House and Senate at the time, this was a mere message bill from House Democrats, with no real chance of advancing to final passage. Now, with the White House back under Democratic control, Congress is expected to defer to US EPA and USACE on this issue.

While this temporary guidance is in place, US EPA and USACE officials are working on a forthcoming rulemaking that will include a broader definition than the Trump Administration’s NWPR. The key challenge they will seek to address is how to broaden this definition in a manner that can withstand the judicial scrutiny that rendered the Obama Administration’s 2015 Clean Water Rule ineffective and led to a messy patchwork of differing stateby- state applications.

What should you be doing?
During this time of WOTUS uncertainty, it is critical for water stakeholders to keep appraised of the latest legislative, judicial and regulatory developments that may impact a project’s compliance with the Clean Water Act. While the specifics of a final rule remain unknown, there are many resources at your disposal, including your nearest USACE District Office or US EPA Region office.

We will continue to stay on top of any developments as US EPA and USACE officials seek to strike the right balance and define WOTUS in a way that protects the health of our nation’s waterways while remaining in compliance with the Supreme Court’s parameters. The one thing we know for sure – the Biden Administration’s rule will broaden the CWA’s jurisdictional waters, so anything stakeholders can do to proactively clean up wastewater and runoff will be setting them up for success. If you have any questions on this issue or all things water, please do not hesitate to reach out to the author at mstevens@signaldc.com.