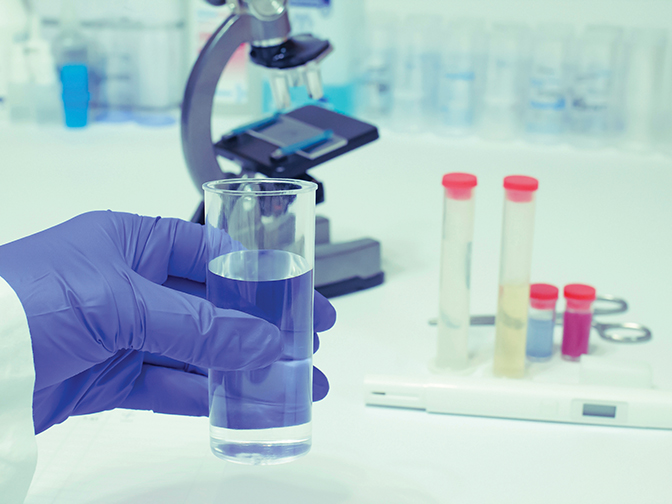 Nitrosamines are a class of chemicals that can be formed in drinking water as a result of the use of chloramine as a disinfectant. According to US EPA’s Integrated Risk Information System (2002), some of these compounds can have significant toxicity. Considering the potential risks related to nitrosamine formation in drinking water, US EPA included several nitrosamine compounds in its Unregulated Contaminant Monitoring Rule (UCMR-2). Being included in UCMR-2 means that water supplies began monitoring for the presence of these compounds, and reporting the data to US EPA, in the period 2008 to 2010.

At the 2015 meeting of the NSF Joint Committee on Drinking Water Treatment Units, a task group was formed to review the UCMR-2 data related to nitrosamines in drinking water. At the 2016 Joint Committee meeting, the task group reported on the occurrence data for the six nitrosamines listed in UCMR-2. Of the six listed N-nitrosamines, N-nitrosodimethylamine (NDMA) was by far the most important in occurrence and concentration. Based on this information, the Joint Committee determined that NDMA can serve as an indicator for the rest of the N-nitrosamines. Additionally, NDMA is a member of a family of extremely potent, genotoxic, carcinogenic N-nitrosamines. NDMA’s potential for cancer is much higher than that of trihalomethanes, for example. Upon consideration of all of this information, the Joint Committee unanimously voted to instruct the task group to focus on NDMA and develop criteria for an NDMA reduction claim under the DWTU standards, using the US EPA recommended levels.

NDMA reduction claim development
The 90th percentile of occurrence data generated under UCMR-2 is 40 ng/L, which the task group determined to be appropriate for the influent challenge for contaminant reduction testing. The task group selected a maximum allowable concentration in treated water of 6 ng/L. This selection is based on toxicological risk assessment leading to 6 ng/L as the Total Allowable Concentration (TAC) value under the latest NSF/ANSI/CAN 600 standard.

Because of the very low concentrations of NDMA being considered for this test, it was determined to conduct an initial study to ensure the ability to prepare a 40 ng/L solution and ensure its stability for 24 hours, as well as to test the limit of detection of 2 ng/L.

From 2017 to 2019, the task group completed this initial stability study and demonstrated that:

These positive results from the initial study were shared with the Joint Committee in 2019. At that time however, it was determined that work on PFOA/PFOS reduction and issues related to lead in drinking water were higher priorities, so work on NDMA reduction protocols was tabled for the time being. By 2021, enough progress had been made on these pressing issues to allow resumption of the effort regarding NDMA reduction.

A recent investigation of occurrence of nitrosamines and their precursors in North American drinking water covered a variety of drinking water treatment systems using chloramine disinfection
in the US and Canada in 2017.[1] Some NDMA was detected in drinking water produced in most of these systems. NDMA was detected above the minimum reporting limit of 2 ng/L in treated
drinking water from approximately 70 percent of these treatment systems using chloramine disinfection. The 75th and 90th percentiles, as well as the maximum NDMA concentrations, were 5, 11 and 38 ng/L respectively. After the maximum detention time in the distribution systems, NDMA was detected at even higher levels. The 75th, 90th percentile and maximum detections of NDMA in distribution systems using chloramine disinfection at the maximum detention time were 11, 23 and 50 ng/L respectively.

Recommended contaminant reduction requirements
The task group is recommending using the test method for reduction of organic contaminants from NSF/ANSI 53, with specialized test water that is established to be free of detectable NDMA background, as the method for testing reduction of NDMA. This method uses 60 psi as the influent pressure, with the flowrate being uncontrolled by the testing laboratory. Water is cycled through at a 50 percent on, 50 percent off cycle, with the option of using a 10 percent on, 90 percent off cycle. It is important to establish that the water is free of NDMA background before testing begins. Laboratory validation of capability and water preparation and characteristics are described in Figures 1 and 2. 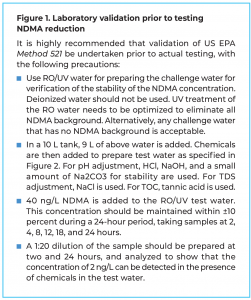 Samples of the challenge water and treated water from both test units are collected at start-up, 50, 100, 150, 180 and 200 percent of the manufacturer’s rated capacity. For systems with a performance
indication device, samples are collected at start-up, 25, 50, 75, 100 and 120 percent of capacity. Figure 3 describes the challenge water and maximum allowable treated water concentrations of NDMA. If all of the treated water samples are at or below 6 ng/L, then the result of the test is acceptable to establish a claim of NDMA reduction.

Next steps
The requirements for NDMA reduction testing are currently being reviewed and voted on by the Joint Committee. If the results of the vote are successful, the proposal will be reviewed by the NSF Council of Public Health Consultants (CPHC) to assure that it is protective of human health. Once the CPHC has approved the proposal, NSF/ANSI 53 will be updated to add these requirements to a future version of the standard.