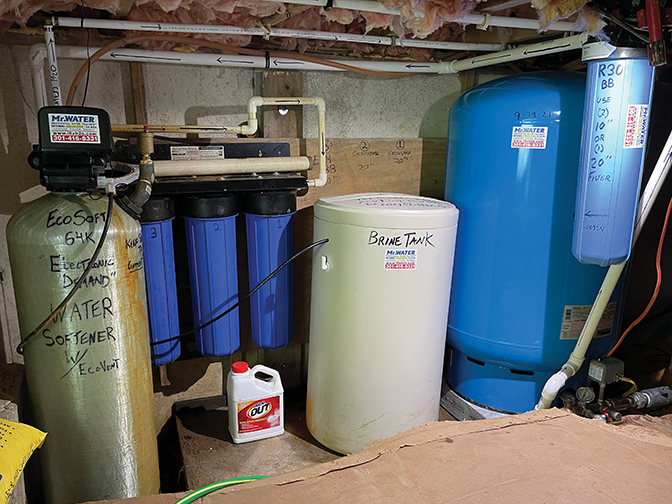 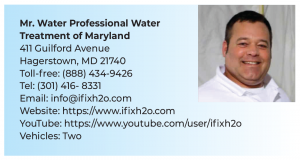 Scott Handy got his first glimpse into the water industry at age 22 when he was working as a repair person and door-to-door salesman for a vacuum cleaner dealer near his hometown of Seaford, Delaware. He recalls that his boss had purchased six or so well water treatment systems meant to take iron out of the water. They were just sitting in a back room in boxes unused because his boss could not get them to work. Handy’s boss asked him if he could figure out why the systems he had already installed weren’t working properly and tasked him with figuring out how to fix them.

Once his interest was piqued, Handy went down a rabbit hole of all things water treatment. In 1988, he answered an ad for his first water treatment company job as a salesperson where he was first officially shown the equipment and how it works. In the decades following, Handy experienced many positions at several different water conditioning and plumbing companies and gained extensive knowledge of all things well water treatment-related.

When Handy decided it was time to take the next steps towards starting his own business, he moved to the Central Maryland area and became a full-time service plumber. He knew that to be a successful business owner/manufacturer and serviceman in the industry, it was imperative that he gain skills in plumbing. He began to catch eyes with not only his extensive water treatment sales and now installation experience working for various renowned companies but now also his experience in the service and repair of well and pump systems. Handy eventually bought a house in Hagerstown in 2003 and it was there that Mr. Water Professional Water Treatment of Maryland was founded in 2005.

It wasn’t long before Handy single-handedly made a name for himself as the water softening and conditioning expert of the Central Maryland area. Aside from installing his own custom built equipment, Handy advertised his skill in repairing existing filtration systems from almost any major manufacturer. “They’re always selling something new, so there needs to be people like me willing to fix what customers already have,” he said.

Handy faced a lot of extreme issues regarding well water chemistry in his work, eventually leading him to designing his own water softening technology to permanently solve high iron levels, terrible rotten egg sulfur smell and hard water. After seven years of review at the United States Patent and Trademark Office, he had two utility patents approved in 2016. The first approved was #9,434,626 for the new water softening process that uses closed pressure aeration. The second was #9,499,417 for the water softening apparatus itself.

This equipment is specially designed for long-term cost savings and versatility to combat a wide array of well water problems. When properly sized, the water softener with closed pressure aeration will remove iron, calcium hardness and repulsive hydrogen sulfide with no more maintenance than any standard water softening system in use today. In fact, it is constructed to be lower maintenance when compared to traditional water softening and conditioning equipment designs because tank re-bedding is not necessary.

Before his aerated water softener system idea, Handy was using mainly a chlorine injection systems to get the sulfur smell out of well water. “They were problematic. They would leak bleach and ruin your clothes. Customers were grateful to get that smell out of the water with chlorine injection systems but they were just not liking to have to take care of it,” he said. Mr. Water LLC’s patents quickly gained positive recognition that continues almost 15 years later. “There’s times when I don’t come back in (for maintenance) ever,” Handy said.

Handy is not just the sole owner of the company, he is the sole technician. He has been working alone out of his Hagerstown home for 17 years now. “Let’s face it, the water softening industry isn’t really all that sexy,” he said, admitting the difficulties of finding an employee who has already demonstrated an interest with basic knowledge in the business and is already licensed. Handy has thoroughly enjoyed his work though, despite being a one man show. “I’ve got to do something, and I enjoy what I do. I get my exercise,” he said.

Handy recommends the company’s YouTube channel to anyone considering his services. There are videos ranging from one minute to over 30 minutes explaining everything between how home water softeners work to how to tell if a bladder tank is failing. He also has several videos explaining the process of softening and aeration that his patents utilize. Handy’s channel has created a space for sincerity and education that is extremely useful for those either dealing with or trying to prevent water treatment problems.

Mr. Water LLC has stood out over the years for its willingness to take a second look at issues that other big companies wouldn’t get involved with. (Handy is referring to a customer he currently has in West Virginia.) With 200 ppm of iron documented by a West Virginia State lab in the water of his client’s rental home, with just a crawlspace for a system, this situation was “off the charts difficult,” he said. Other companies in the area said the water was untreatable and refused to even give the gentleman a quote.

When Handy was contacted by the home owner, “I put my system to the ultimate test and got an incredible 98 percent of (the iron) out,” Handy said. (He believes he can remove 100 percent with a larger system containing more softening resin and air contact time. It is now merely a matter of limited space were the system is located and for the time being, is able to get the remaining 1.5-2ppm of iron out with filters). Handy recalled several water quality problems over the years he has resolved that were initially deemed impossible to treat by other companies, realizing he is “fixing the unfixable.”

According to its mission statement, Mr. Water LLC’s goal is to advance the science of water filtration and purification through innovative patented products that will improve the quality of customers water. Mr. Water sees the importance of adhering to ethical standards and raising awareness of water quality problems by educating its customers on the best ways to solve them. As consolidation grows in the industry, Handy reflects on the future of his own business. Although the water conditioning field may not be all that glamorous , Handy is confident that as more people become aware of water quality problems and the importance of his specialized services, his business is only going to grow. “Water conditioning is a science and a trade. No robot is taking my job!”