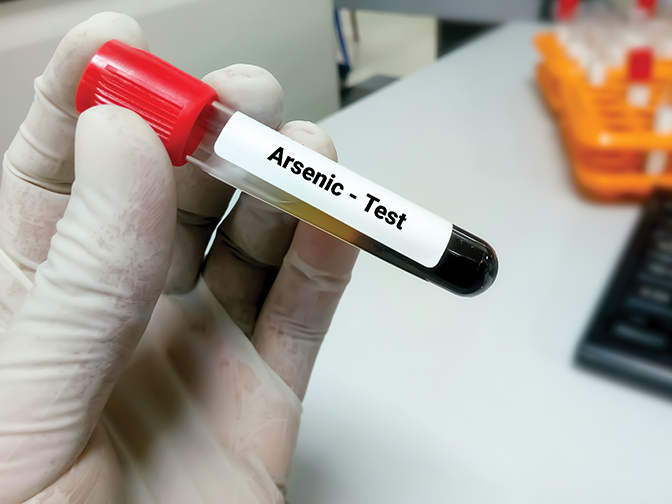 Arsenic is an abundantly occurring element that can be found at varying concentrations in the Earth’s outer crust around the world; it tends to be found at higher concentrations in areas where there are copper and lead ores. Arsenic is classified chemically as a metalloid since it exhibits properties of both a metal and a nonmetal, but we usually just call it a metal.

Arsenic cannot ever be destroyed in the environment; it can only change its form. Most inorganic and organic arsenic compounds are white or colorless powders that do not evaporate, but can be attached to tiny particles that inevitably become airborne. When airborne particles are tiny enough, they can stay suspended by air currents for days and travel many thousands of miles from their original point of origin. These particles will eventually hit the ground as rain, snow, etc. Many common arsenic compounds can easily dissolve in water, so arsenic can easily get into lakes and rivers, and is not only found in groundwater.

We are exposed to arsenic every single day through fruit juice, vegetables, rice and grains, dust in the air, or even by contact with pressure-treated lumber. These sources of arsenic usually have no unique smell or taste, so you typically cannot tell if an arsenic compound is lurking in your food, water or air. Currently, the primary recognized cause of unintentional arsenic consumption is from drinking groundwater that contains arsenic. Surveys of US drinking water indicate that about 80 percent of water supplies have less than 2 ppb of arsenic, but two percent of supplies exceed 20 ppb of arsenic.

An underappreciated and growing threat
Both inorganic and organic arsenic compounds can be metabolized by your body to varying degrees and some will even be excreted in your urine. Most organic arsenic is expelled and a large amount of inorganic can leave your body after a few weeks, but some of that arsenic will remain in your body indefinitely, usually bonded to your bones, muscles and connective tissue. An elevated level of arsenic in the body is believed to interfere with cellular metabolism.

The United States Department of Health and Human Services (DHHS), the International Agency for Research on Cancer (IARC) and United States Environmental Protection Agency (US EPA) have classified arsenic as a human carcinogen. Chronic exposure to even low arsenic levels (less than 0.05 mg/L) has been linked to health complications, including cancer of the skin, kidney, lung and bladder, as well as other diseases of the skin, neurological and cardiovascular system. Historical studies indicate that skin absorption of arsenic is negligible, so handwashing and bathing do not appear to pose a known risk to human or animal health. 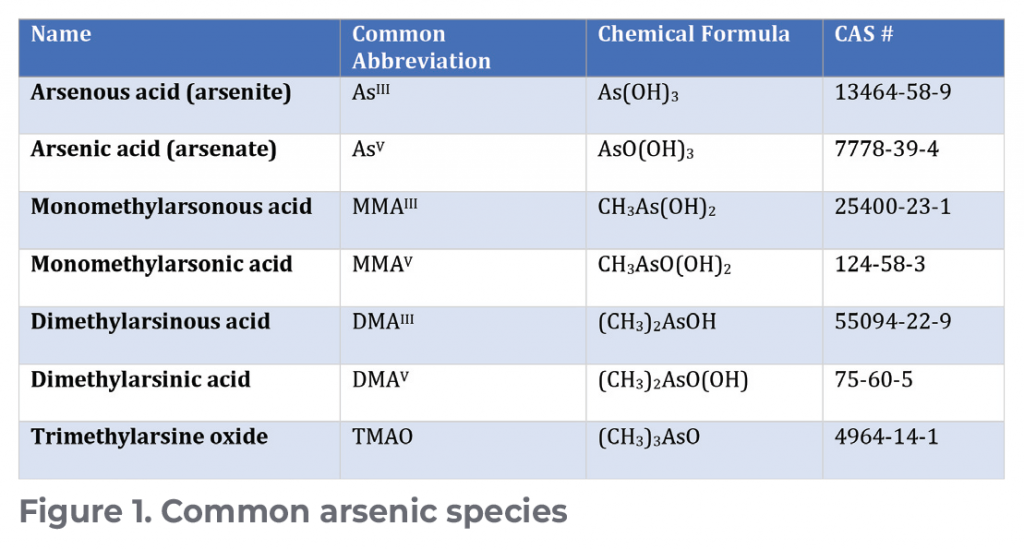 There are seven common arsenic species that can be encountered in water (see Figure 1). Water exposed to dissolved oxygen will generally contain arsenic in the pentavalent +5 (oxidized) state, whereas hypoxic waters (low or no dissolved oxygen) will contain arsenic in the trivalent +3 (reduced) state. Both are quite toxic but the trivalent is more easily assimilated by humans, making it even more dangerous. Some species of bacteria derive energy by oxidizing various materials while reducing arsenates to form arsenites using enzymes known as arsenate reductases. There are also species of photosynthetic bacteria that can oxidize arsenites into arsenates, so remember to speciate whenever practical before attempting a treatment solution. Treatment methods vary in efficacy based on the oxidation-state of the arsenic, base pH and of course, the concentration of interfering contaminants.

Setting the limits and balancing cost
The path towards reducing arsenic content in drinking water has been slow and tortuous, since arsenic is found in so many places and the significant expense involved in treating it at a municipal level. The first national allowable arsenic level regulation in the US was 0.05 mg/L, as established under the 1975 National Interim Primary Drinking Water Regulations (NIPDWRs). As part of the 1996 Safe Drinking Water Act (SDWA) amendments, US EPA was directed to conduct health effects and cost-versus-benefit research to determine a new arsenic standard.

In June 2000, US EPA proposed a revised arsenic MCL of 0.005 mg/L and requested public comment on alternative MCLs of 0.003, 0.010, and 0.020 mg/L. The agency published a final rule in the Federal Register in January 2001 (US EPA, 2001), establishing the maximum contaminant level (MCL) of arsenic in drinking water at 10 ppb (0.010 mg/L). This rule is enforced at over 60,000 community water systems in the United States and adherence to the rule is required by most counties before a home can be occupied if served by a private water source. According to the US Geological Survey (USGS), arsenic concentrations exceeding 10 μg/L appear to be far more frequently observed in the western United States (including Alaska) than in the eastern half.

Obviously, US EPA’s MCL for arsenic doesn’t represent a safe consumption level, but rather a level at which the risk to human health and safety is reduced and economically achievable by municipal water providers. Since arsenic is consumed from so many other non-water sources, we should strive to reduce the drinking water arsenic level to zero.

Treatment strategies
US EPA has identified the following as Best Available Technologies (BATs) for achieving compliance with the latest regulatory limitand are listed in the final rule and the Implementation Guidance for the Arsenic Rule as Small System Compliance Technologies (SSCT).:

Additionally, a variety of specialized resins, titanium and other rare-earth metal media are available that show promising results in addressing arsenic. In the POE world, the most common methods of treatment include:

Fools rush in
The first rule when attempting to address arsenic contamination is to know and understand your limitations. If you’ve never done this before, don’t rush in and wing it; you will (at a minimum) embarrass yourself and possibly endanger the health and safety of your customer. Consult with industry experts and your equipment supplier(s) to ensure that you always protect your customer and put their needs first.

Testing is not optional
Whenever you are tasked with an arsenic reduction project, test the source water using a reputable NELAP ( National Environmental Laboratory Accreditation Program) accredited laboratory whose data will be accepted by your local regulating agency. Test for the following at a minimum: total arsenic (speciation is nice, but it doesn’t hurt to just assume that it is all As3 as a precaution), pH, total alkalinity, phosphate, silica, vanadium, selenium, molybdenum, iron and manganese. If there is hydrogen sulfide (rotten-egg) odor, then be sure to quantify this for the total oxidative demand calculations.

Knowledge is power
The Water Quality Research Foundation (WQRF) maintains a powerful resource in the Contaminant Occurrence Map (https:// www.wqrf.org/map.html, see Figure 1). Be sure to visit this site and research reported arsenic and other related contaminant levels in the area; this can help you with contingency-planning. The USGS also maintains and extensive GIS database. The map graphic image at https://water.usgs.gov/GIS/browse/arsenic_map.png is based on samples from 31,000 wells and springs in 49 states collected for studies on potable groundwater resources by the USGS, the Minnesota Pollution Control Agency, the Texas Water Development Board, the Wisconsin Department of Natural Resources and the six New England states: New Hampshire, Vermont, Maine, Massachusetts, Rhode Island and Connecticut. The tabular data and GIS files in this data set exclude arsenic concentrations from non-USGS sources. Estimation of the arsenic concentration in groundwater in any specific area must consider the following limitations and sources of variability:

With these qualifications in mind, data from resources like these provide an estimate of arsenic occurrence in the groundwater resource in general. 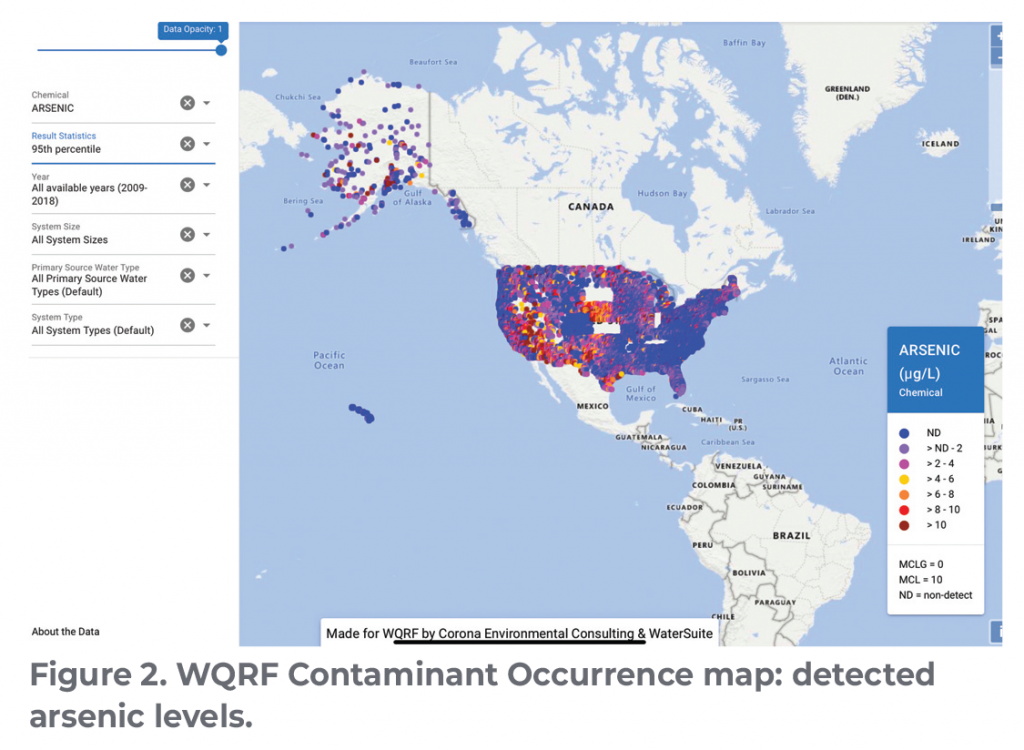 Developing a treatment strategy
The scope of this article is not to teach you exactly how to treat every situation, but rather to help you understand the treatment paradigm and possibly improve your technique. Some things to consider:

Here are some general guidelines:

See Figure 3 for an example of combining manganous media with dual-pass sorbents along with pre- and post-filtration. 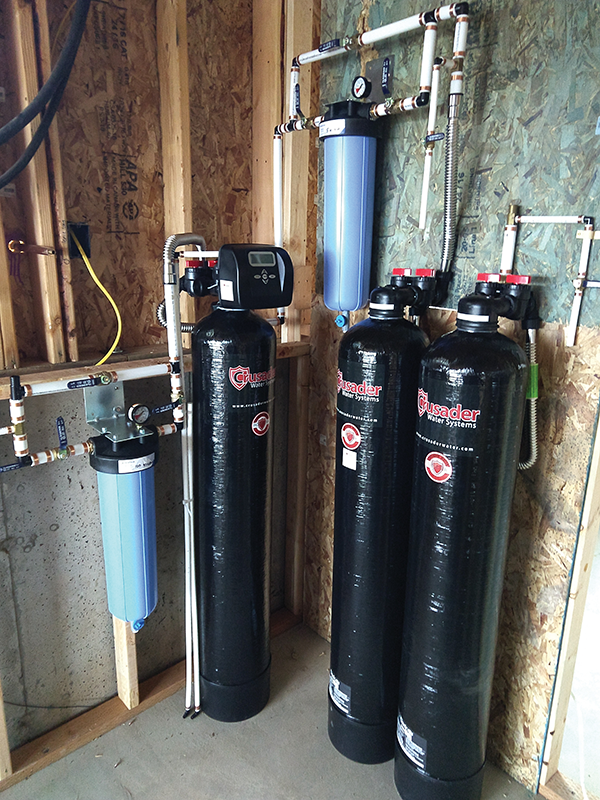 Pilot
Whenever possible, pilot test the proposed treatment approach, or at the least, bench to test the efficacy of your approach. It is so much cheaper and easier to adjust your methodology at this point than to install full-size equipment and have to make changes later at full-scale.

Managing expectations and planning maintenance
Carefully educate the prospective client about what your arsenic reduction system can and can’t do, especially if there are other non health-related contaminants like hardness, sulfates and TDS that will not be addressed. Equally important is to plan and document a routine maintenance plan for prefilters, oxidizers, sorbet tanks/cartridges and other related components; your system will only perform properly when properly maintained.


Closing thoughts
Arsenic levels continue to rise and we’re finding it in more places than ever before. As more research data is developed, we are realizing that the only acceptable level of arsenic in drinking water is ZERO. With global climate change and exploding populations, groundwater resources are increasingly strained and underground water dynamics are changing. We don’t have access to the same quality or quantity of water that we used to and probably won’t ever have it again. You need to be prepared to address arsenic in places and at levels that you’ve never had to address before.

Greg Reyneke has almost three decades of ongoing experience in the management and growth of water treatment dealerships. His expertise spans the full gamut of residential, commercial and industrial water quality management applications. A recipient of the Ray Cross and Regents Awards, Reyneke has been active in the WQA since 2004 and has served on numerous committees and task forces. He is past-President of the Pacific Water Quality Association and serves on the WQA Board of Directors and Board of Governors. Reyneke writes prolifically and travels worldwide, helping to improve human life through better water quality. You can follow him on his blog at www.gregknowswater.com.