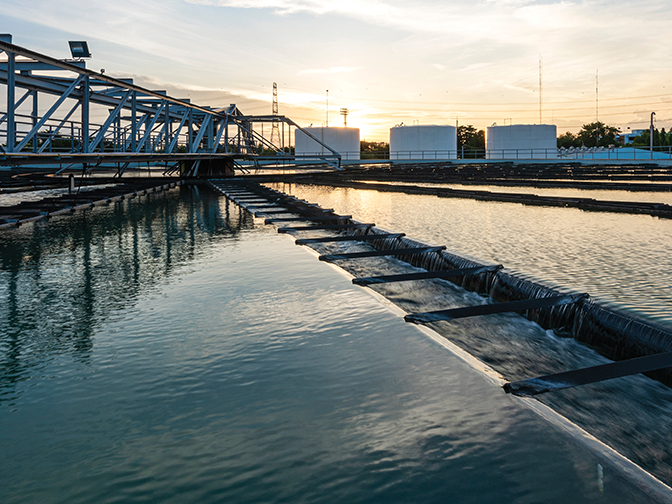 There are two major ways the US deals with water sanitation: centralized treatment plants and septic tanks. The problem, as Rakesh Govind of NextGen Septic, LLC puts it, is that centralizing these systems was a huge mistake. Through his research and expertise, Govind has learned about the consequences of centralized technologies, what can be done to reverse their damage and how companies can move on from such outdated practices.

According to Govind, centralized treatment plants connect large cities by sewer lines that release treated water back into rivers and streams that eventually lead to the ocean. This allows groundwater, after use, to become salt water in the ocean and this water never returns back into the ground, its original source. Bacteria in soil might treat water from septic tanks where there’s no shoreline connection, but microplastics and other solid contaminants are being left behind to clog the soil drain fields and further pollute ground water. “In the US, we have more than five million soil drain fields that are getting plugged up from microplastics and biomass growth in effluent water,” Govind said. He and his team at NextGen Septic are here to address these problems and invest in a healthier, more sustainable future for the water industry.

Govind is originally from India, where he received his Bachelor’s Degree. He came to the US on a fellowship for his Master’s and eventually his PhD. After school, Govind was offered an academic position as an assistant professor of chemical engineering at the University of Cincinnati, where he received his graduate degrees. He later obtained full professorship and worked on many research projects funded by US EPA. Govind started working with PRD Tech Inc. in Cincinnati, OH, looking at air pollutants and using bacterial biofilms to treat organic compounds in air. After he had brought this idea to the market, Govind started focusing on sanitation. In 1996, he traveled around the country trying to gain recognition for his research and how it could be used for many different circumstances. “I realized I would have to open up my own company in order to demonstrate to industries that these technologies were applicable to them,” he said. “I wondered, why don’t we create an advanced septic tank that has the technology to take the water, filter and disinfect it, then add the clean water back into the ground?” With centralized treatment, the water doesn’t come back – at least, not as clean water.

Currently the President of the company, Govind co-founded NextGen Septic in January 2018 alongside three experts in product marketing to promote his design for advanced septic tanks for single family houses, so that treated water could be used for irrigation. Although mainly residential, the company is not limited. Its systems can be scaled up for subdivisions and large buildings. It serves clients ranging from local to international. NextGen Septic offers in-house training for employees and works extensively with professional engineers. The company’s best-selling products use chemical-free reduction of TDS with surface-assisted crystallization.

NextGen Septic’s technological inspiration stems from the goal of recycling and reusing water. The company’s current project is to utilize solar powered and/or energy efficient sewage treatment for seawater desalination systems. The five-year plan is to expand production of on-site sewage treatment and desalination systems. Its new market focus is to produce drinking water from the humidity of ambient air, as Govind’s early studies have proven possible and applicable in many contexts. These technologies, plus desalination systems, have recently been implemented in developing areas of the Philippines and Africa as a cheaper and more sustainable way to produce non-potable water for irrigating crops.

Working with international clients has revealed barriers that NextGen Septic is determined to overcome. In the Philippines, huge desalination plants are incredibly expensive to build and operate. For citizens to access clean water, it is necessary that it be at a decentralized, local level. By designing stand-alone, one- to three gpm desalination systems using seawater to create drinking water, NextGen Septic has made clean water attainable for local communities. It is also building five-gpm sanitation treatment water systems for deployment in Africa.

Septic tanks in the Congo are collected by pickup trucks that take them to a treatment plant. These plants dump the tainted water wherever convenient and there is no accountability. The septic tanks can also overflow when it rains torrentially, seeping the contaminated water into the soil, which negatively impacts farming and overall community health. NextGen Septic’s solar powered machines will sit next to existing septic tanks and take water from them to be purified and used for irrigation of crops.

“One of the problems we are seeing in many countries, Bangladesh or India for example, is that the drainfield water from septic tanks are running into the oceans,” Govind said. NextGen Septic’s systems put water back into the ground, which prevents it from getting more anoxic and therefore, dissolve elements like arsenic or radium. When water percolates even further into the ground, elements like uranium will also dissolve. Before adapting this technology, Bangladesh and India’s water systems were often poisoned by arsenic, which made many crops toxic and created health issues across the nation. As freshwater diminishes daily and drought continues to plague the world, Govind believes NextGen Septic’s machines are the solution.

Govind has worked extensively to push journalists to report on the diminishing supply of groundwater but marketing the technologies has proven extremely difficult. As a result, NextGen Septic is hiring more people to expand the company and produce more systems internationally to increase outreach. “We want to promote this idea that centralization, which we have done over the last 50 years, is not a good approach,” he said. Implementing his technology to a modern, smaller scale, such as a subdivision or house, is the way to go. It’s all about redundancy. For this reason, Govind confidently promotes decentralized treatments as being more capable, efficient in cost and reliable. “Say we get a major storm, or a big hurricane came along and knocked out a centralized treatment plant; thousands if not millions of people would be affected,” he said.

At NextGen Septic, it is believed that the future of the water industry is decentralization instead of relying on single wastewater treatment plants that serve large populations. “Fresh water on this planet is running out and the use of decentralized wastewater treatment plants with wireless communication and high levels of automation will be needed for an increasing population and expansion of cities, untethered to a sewer line,” he said. “The use of solar and wind powered plants in many parts of the world, with limited power supply and capabilities to recycle and reuse sewage water as well as desalinate sea and brackish water, will be required to meet future needs for fresh water.” He added that another important area for future growth is chemical-free disinfection of water.

NextGen Septic makes sure it is never using water in vain. Govind explained that part of the contamination of Buzzard Bay outside Cape Cod, MA, is solely from septic tanks. They are putting nutrients in the water, which lead to algal blooms that shut down beaches there in the summertime. “Septic tanks are a primitive technology.

The NextGen Septic systems we produce is the decentralized treatment of the future. It does not run the ground out of water, it does not run the world out of fresh water and it actually puts water back in the ground where it came from, allowing the water to be reused,” he said. Anywhere this technology is implemented, there will be an exponentially positive effect on health, food and overall sanitation in communities all over the world.