Industry mourns Terry Heckman
The Pacific Water Association has been saddened by the sudden death of Terry Heckman on August 11. He was 70 years old. Heckman spent most of his life in the water improvement industry, from Enting Water, through GE Water and Process Technologies to Pentair. Before retiring, he also consulted for several OEMs. Heckman always was engaged in the high-efficiency aspects of the water treatment industry, such as sensor-based water softeners to EDI salt-free technology to water-on-water ROs. He was the foremost trainer in whatever he was doing at the time. Along the way, Heckman found time for the politics of our industry, joining the PWQA Board of Directors, working through the chairs and becoming President for the 2006-2007 term, the year the association celebrated its 50th anniversary. Even though he was from AZ, he attended PWQA legislative events in Sacramento, CA, every year, helping to keep the message alive and representing the industry. Heckman is survived by his wife Judy as well as his children and grandchildren. Only a few short weeks ago at the WQA convention, his 30th, he was proud to attend and cap his retirement. Services will be held at Our Saviors Lutheran Church, 612 South Ellsworth Road, Mesa AZ, on September 11 at 1 pm, September 11.

Nelsen mourns Yankovich
Nelsen Corporation mourns the loss of Jimmy Yankovich, who passed away suddenly on March 17. He was with Nelsen for 25 years and was one of the kindest people you’d ever meet. Yankovich was a dedicated member of the Nelsen team helping countless customers and fellow employees with his years of knowledge and servant’s heart. Although conflict does happen from time to time, where he was concerned, Nelsen management couldn’t recall a single customer complaint or a conflict between him and a fellow employee. He was a kind person…quick with a smile and friendly hello. His impact on Nelsen and each of those who had the privilege of working with him will remain for a long time…if not forever.

Silberorn added to WQA staff
WQA has named award-winning meeting professional Angie Silberhorn, CMP, as its new Meeting Services Director. She will direct the association’s annual convention, its Mid-Year Leadership Conference and other key customer and member events. Silberhorn comes to WQA after eight years with the Warehousing Education and Research Council, most recently as its Director of Events and Strategy. Silberhorn holds a Bachelor of Science in hospitality and tourism management from Roosevelt University. 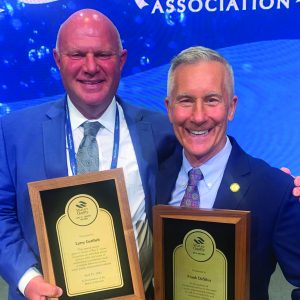 ResinTech veterans honored by WQA
A pair of ResinTech veterans were honored with WQA Leadership Awards for their commitment to the water treatment industry at this year’s WQA Convention & Expo in Las Vegas. Frank DeSilva is National Sales Manager for ResinTech Inc., where he has worked for more than 30 years. He holds a Master of Science in Environmental Engineering from New Jersey Institute of Technology and has authored numerous articles on ion exchange and related topics. DeSilva serves on the Board of Directors of the Pacific Water Quality Association, is a Past President of that association, is a member of the AWWA Ion Exchange Standards Committee and serves on the Legislative and Regulatory Committee of the Association of Water Technologies. Larry Gottlieb has been President of ResinTech, Inc. since 2017. During his tenure, he launched several subsidiary businesses including Aries Filterworks and ACM Technologies. Gottlieb earned a degree in mechanical engineering from the University of Pittsburgh and began his career with Holtec International. He serves on the WQA Board of Directors and is a member of the US Department of Commerce’s Environmental Technology and Trade Advisory Committee (ETTAC).