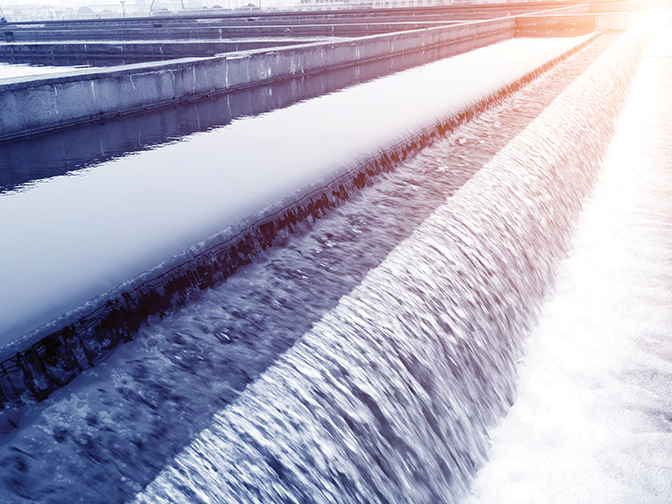 We have been hearing about the issue of microplastics in source water and drinking water for several years now. This issue is an interesting one because although microplastics have been detected, there has not been clear consensus on the significance of it. There has also not been an accepted test method to establish a water treatment technology’s ability to treat the water for microplastics reduction.

Considering this issue, in 2018, a task group was formed under the NSF Joint Committee on Drinking Water Treatment Units to develop requirements and a testing protocol for POU and POE devices for the reduction of microplastics in drinking water. The first step was for the group to explicitly define what is meant by microplastics, specifically the size of the plastic particles being considered as microplastics. To this end, the group reviewed existing global regulatory definitions of microplastics as a basis for a size range. Ultimately, the group settled on a definition of microplastics as having a size greater than 1 and less than 5,000 μm. Given that microplastics are defined as plastic particles in this size range, the task group further determined that the NSF/ANSI 42 Particulate Class I reduction claim could serve as a conservative surrogate, as it specifies a test particle size range from 0-80 μm and allows for a reduction claim based specifically on 0.5-1 μm sized particles. Because at this point in time there are not clearly documented health effects related to microplastics in drinking water and there are also no aesthetic effects (taste, odor, appearance) of microplastics in drinking water, the task group is proposing to add this claim is being added to NSF/ANSI 401 for emerging compounds and incidental contaminants.

Current status
As of the writing of this article, a ballot is out for voting by the Joint Committee. With a few more days left in the balloting period, the vote is currently 22 affirmative, zero negative and zero abstentions. Although there are no guarantees, at this point it is looking favorable for the ballot to pass. Assuming the ballot passes, it will move to the NSF Council of Public Health Consultants for ultimate ratification as a last step before being adopted into NSF/ANSI 401. If all goes smoothly, the updated version could be published by late 2021.

Test method
One appealing aspect of this proposal is that the test method is one that already exists in NSF/ANSI 42 and one that many different treatment systems have successfully passed. Essentially, a challenge of particles is introduced into test systems and the requirement is that the systems must reduce the number of particles in the size range of ≥ 0.5 μm to < 1 μm by 85 percent.

For plumbed-in systems and faucet mounted systems, two systems are conditioned in accordance with the manufacturer’s instructions, using the general test water without the particulate challenge added. The systems are tested using challenge water with the particulate challenge added, at the manufacturer’s rated service flow and at an initial dynamic pressure of 410 ± 20 kPa (60 ± 3 psig). The pressure is readjusted during the test, although the systems may experience some change in dynamic pressure. The systems are operated on a 50-percent-on/50-percent-off basis with a 1- to 3-minute cycle, 16 hours per day, followed by an 8-hour rest under pressure. A 10-percent-on/90-percent-off cycle of operation may be used in testing if requested by the manufacturer.

For POE systems, one system shall be conditioned in accordance with the manufacturer’s instructions. The system is tested using the particulate challenge water at the manufacturer’s rated service flowrate and an initial dynamic pressure of 410 ± 20 kPa (60 ± 3 psig). The pressure is not readjusted during the test, although the system may experience some change in dynamic pressure. The system is operated on a 50-percent-on/50-percent-off basis with a 1- to 3-minute cycle for four cycles. Following the fourth cycle, the system is operated continuously 16 hours per day followed by an 8-hour rest under pressure.

Systems that use regeneration as part of the operating cycle must pass the applicable requirements after the completion of a minimum of three operating/regeneration cycles. Non-regeneration systems that recommend backwashing over the life of the system must be backwashed at the manufacturer’s recommended interval with a minimum of one backwash at the midpoint of the test.

Sampling and analysis
Influent challenge and filtered water samples are collected at the beginning of the on portion of the cycle at the start of the initial cycle after two unit void volumes (a void volume is the amount of water that is required to fill the system to the point where no air is left in the system) have passed through the unit, at the start of the fourth cycle and when the original flowrate of the system has decreased by 50 percent. Sample size is 500 mL or one unit void volume, whichever is larger. The samples are collected at the beginning of the flow to the test unit to include any particles that may be released from the sudden increase in flow to the test unit, taking into account how much water is in the system downstream of the media and allowing that water to flow out before collecting the filtered water sample.

Meeting the needs of end users
Once again, the NSF Joint Committee on Drinking Water Treatment Units is at work updating the standards to address concerns about an emerging contaminant in source water and drinking water. This time it is microplastics and of course there are others that have been in the works, too, such as PFAS compounds. In the case of microplastics, the Joint Committee is able to leverage an existing, tried and true test method to quickly and easily establish performance of many commercially available treatment systems to address the issue of microplastics in drinking water. The solution to addressing emerging contaminants is not always this straightforward, but in cases where it is, the Joint Committee is pleased to be able to move forward quickly and confidently.