Health and Happiness from a Vending Machine 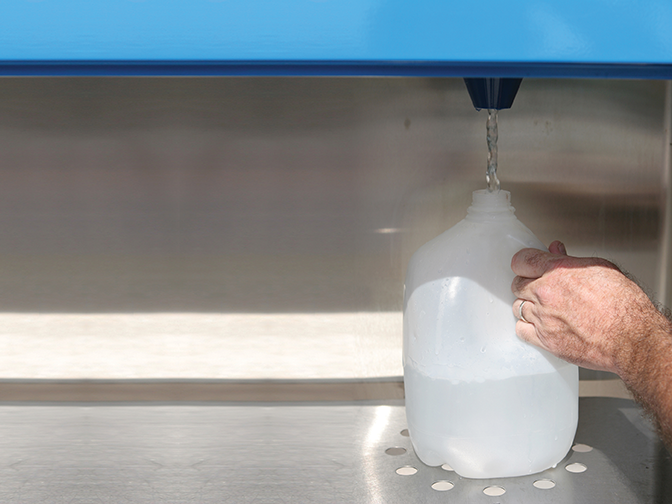 Edward Gale founded Chem-Free Systems in 1991 after retiring from his previous career. In the search for something he could do to keep himself mentally and physical occupied without having to spend gobs of money, he stumbled upon the Water Quality Association convention, which happened to be at Miami Beach, FL, that year. “When I walked around the halls, I discovered big water vending machines that were about $8,000 each. I thought, that is way too expensive to get into, especially with something I know nothing about,” Gale said. He inquired about the possibilities of buying a vending machine for under $1,000 and with that inspiration, he had a simplified, light-weight version designed of what initially caught his eye. He made his product compact enough that it could be hung on walls. Gale went apartment hopping to place his product (of which most were very receptive) and from there, started his business.

“I decided to find a niche within the water vending business. I located my machines primarily in high-rise condominiums where there’d be 300 or 400 apartments,” Gale said. “There was no competition. There’s still no competition.” Once the company became further recognized, it evolved to manufacture bigger, free-standing units specific for outdoor use. The company began finishing its larger units with a special paint that prevents rusting and preserves its original appearance so that they can be placed outside of high-trafficked convenience stores or food markets and look pristine for years. After this development, the market grew in the company’s favor and since then it has been selling the full-size outdoor unit commercially in 17 countries and 45 states.

Chem-Free Systems has been privately owned by Gale and operated by five of the seven employees since its inception. The company has received National Automatic Merchandise Association (NAMA) and state approval. It also provides on-site training as well as a thorough owner’s manual and 24/7 contact numbers. The water vending machines are made in the USA and have received much praise for the quick return on investment and convenience. “Our success depends on your success,” as can be read on the forefront of the business website, is the company motto.

Operators now also have the option to choose alkaline water, which many people consider to be healthier than purified water. “From a business point, the store is adding another product without the need for added inventory, theft, or spoilage as well as earning additional revenue. The machine will attract customers into the store and provide additional impulse sales to the store. It is a win-win for all parties,” Gale said. He added that water dealers are the ideal candidate for a water vending business.

Almost every company in the water industry across the world uses chemicals to eliminate contaminants, but often the chemicals remain even after treatments. Chem-Free Systems earns its name by using UV light to purify water. Chlorine, ammonia and other common elements will never be traced in their product. With the industry using tons of chemicals that each treatment facility must use, Gale believes it is incumbent upon the water conditioning industry to educate people on the hazards of consuming inferior water and that, despite the officials saying their water is safe, long-term consumption is hazardous to a person’s health. “No treatment plant can do anything close to as good a job as the water coming out of a certified vending machine,” he said.

Chem-Free Systems has learned throughout the years how to adjust to tedious protocols that get thrown its way. “Like many companies, some states and municipalities love to develop new and sometimes onerous regulations which, in many cases, is overkill,” Gale said. Without having much choice in the matter, it is important for the company to stay flexible. Chem-Free Systems will occasionally encounter source water from a well and not a public treatment plant. The specific contents of the water must be analyzed to remove the contamination in addition to the use of UV sterilization to inactivate living organisms found in well water.

Above all, Chem-Free Systems is committed to educating the public on the advantages of water vending machines. “Despite the fact that the vending of water has been in existence for over 30 years, the vast number of people are unaware of their ability to source a means of getting high-quality treated water at a very low price,” Gale said, “The market is vast and growing each year.” The company’s hope is that more people will learn of the benefits of only consuming purified water but only if using their own container. “Once people are educated about the contaminants in the public water supply, they will not be keen to go back to using anything but treated water,” he said.

Gale believes water vending machines are the key to a healthier, less wasteful future, as getting access to clean water at a low price becomes increasingly rare. “Some people understand that they just can’t drink tap water, or in some cases, bottled water that was put in storage months ago. A vending machine initiates the process on demand. Drop the money, water comes out and it is all purified right then and there,” he said. Gale has seen that landfills are loaded with tons of empty plastic, single-use containers that never degrade, which are ending up in the oceans, streams and lakes all over the world. “Their use truly should be outlawed,” he said.

Vending water into a customer’s own container is a unique way of getting this vital resource directly to the buyer. “It is an easy, quick and inexpensive method that is an example of providing a product that everyone loves,” Gale said. The company will always keep its mission of providing a high-quality product at a low cost. “Water is an indispensable commodity that everyone needs every day and vending it is ideal for people concerned with their health.”