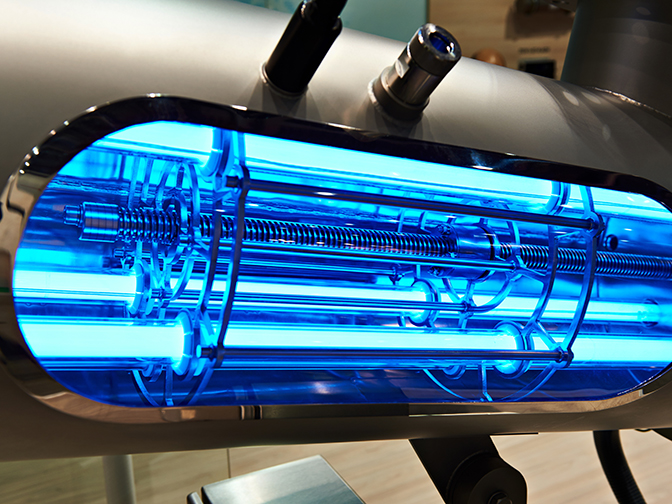 Introduction
Many designers and operators have a love-hate relationship with wipers. While they can address some issues of quartz fouling and reduce service intervals, they also result in challenges for sizing UV equipment, monitoring its performance and supporting the additional maintenance effort required to keep them operating properly. Wipers were introduced into UV chambers to address the fouling of the quartz sleeves, which is defined as the reduced transmissivity of UV light from the lamp, through the quartz sleeve and into the water column. The main causes of this fouling and suggested limits to prevent it are:

The surface of the quartz sleeve has a negative charge, while these contaminants have a positive charge, which will result in accumulation over time. Iron and manganese will readily oxidize, generating the positive ions, which are then attracted to the negatively charged quartz and precipitate preferentially onto the lamp sleeve. Calcium carbonate (CaCO₃), the primary component leading to water hardness, is also a positive ion. Its solubility is temperature dependent, so the heat from UV lamps may increase the amount of dissolved CaCO₃ in the water (the higher the temperature the more insoluble the CaCO₃), leading to more precipitation onto the lamp sleeve as well.

The pros and cons of wipers
Wipers are designed to run the length of lamp sleeves to scrape off the fouling deposits. The addition of wipers has provided a relief from the constant effort of cleaning the sleeves. While useful when new, over time the benefits fade and may cause issues with UV monitoring and increase maintenance efforts.

The primary complaints regarding wipers include:

• The presence of wipers may shadow bacteria, leading to the transfer of live pathogens past the UV system.
• Over time, wipers and deposits can scratch the quartz, reducing the UV transmission from the lamp into the water.
• Wipers also require maintenance, lubrication (a food grade grease), addition of cleaning fluid (a citric acid-based compound), and/or periodic replacement.
• If organic material is present, the wipers can smear it on the quartz, reducing UV transmission.
• Some wipers are manual, requiring a person to go and perform the function regularly.
• Wipers are a moving element in the UV system and just as fans reduce the MTBF (mean time between failure) in electronics, wipers do the same to the UV equipment

The loss of UV transmission can have significant effects on the system performance. Most conventional UV systems will have one UV monitor for up to 10 lamps. This monitor will measure the UV output of one lamp in one location and use this information to establish the performance of the system. The scratching and smearing of the lamp sleeve often caused by wipers will not be uniform, so that over time the accuracy of the monitor can become less accurate. To account for these issues, a sleeve fouling factor of 20 percent is often included in the sizing of the equipment, although the scratching is not generally considered part of the fouling factor. Besides adding cost to the equipment, the factor is an arbitrary rule of thumb which does not work for all situations. Because UV sensors in conventional UV systems only look at a portion of the light sources, fouling and the use of wipers can result in over- or under-reporting the dose applied.

External reflectors. Unlike conventional UV systems, where the lamps and sleeves are located in the pressure vessel, these systems have a transparent tube surrounded by UV lamps. Parabolic reflectors are used to focus the light on the flow tube. This central flow tube is manufactured with either quartz or a PTFE (polytetrafluoroethylene) material. The quartz material will be more transmissive to UV and capable of handling higher pressures (>60 psi), but also susceptible to fouling agents like conventional systems. Some quartz systems incorporate internal scrapers to address this limitation. The PTFE tubes, on the other hand, will be mostly immune to the fouling factors, but limited in transmissivity and their ability to manage pressure (<60 psi). This limits how large the tube can be for the effective treatment of water. Since the lamps are external to the flow, the total number of lamps may be higher and the size of the system will be larger.

Due to the smaller size, the water column has less contact with quartz, which reduces the surface area for fouling chemicals to attach to the sleeves. Also, since the units are much more energy efficient, less heat is generated by the lamps. Less heat equates to less precipitation from the water and lower levels of fouling. Since the number of lamps (and therefore sleeves) is so much lower in these systems, the effort to replace fouled sleeves is on par with the maintenance requirements for wipers. The sleeves can be removed, cleaned and replaced, or a spare set of sleeves can be reinstalled to quickly get the system back on line, which only takes about 15 minutes. Also, since there are no wipers to scratch the sleeves, they will not need to be replaced as often, further reducing the operating costs.

Another benefit of the highly reflective chamber is that its UV monitor captures the intensity for the entire chamber, not just a point on one of the lamps. The chamber acts as an integrating sphere, able to capture the light over the entire length of the lamp and from all sides of the chamber. Therefore, the system intensity readings provide a real picture of the dose delivered to the water column throughout its entire volume. The accuracy of this information makes it a simple task for the operator to know when it is time to clean the equipment.

Conclusion
Regulators and utilities have become comfortable with the existence of wipers in the UV equipment, despite some of their shortcomings. Today, however, there are technologies on the market that can provide the same UV disinfection performance with respect to fouling without the drawbacks of wipers.

George Diefenthal is CEO of NeoTech Aqua Solutions and has been involved in the UV water treatment industry for over 20 years. He has an BS in electrical engineering (1981) and an MBA (1991) from San Diego State University. During his career he has held positions and managed groups in engineering, manufacturing, operations and sales.

J. R. Cooper, PhD, founded Ultraviolet Sciences, now NeoTech Aqua Solutions, in 2002. During his career, he has held the positions of VP of Engineering and Development at PurePulse Technologies and VP of Engineering at TEAL Electronics. Cooper received his PhD in electrical engineering from Texas Tech University in 1986. Since then, he has engineered and produced numerous innovative products, including the NeoTech Aqua Solutions line of UV equipment.

About the company
NeoTech Aqua Solutions manufactures UV systems with a patented reflective technology. These systems have been in the market for over 10 years and proven themselves in a number of industries, including life sciences, microelectronics, food and beverage, recreational water and cooling towers.