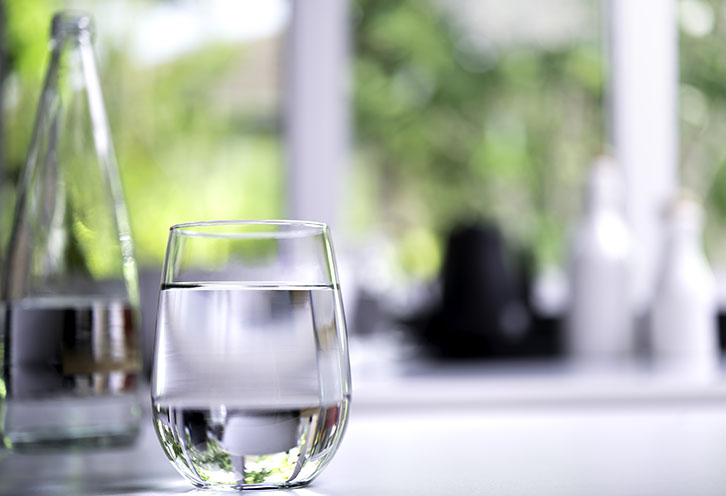 This past spring, I was asked to serve as a judge for the 31st Annual Berkeley Springs International Water Tasting, along with other journalists and water industry experts. I was honored to be selected but admitted that I didn’t know how to judge water. The organizer, Jill Klein Rone, assured me that I would be taught everything I needed to know.

Just two weeks after attending EWQA’s training day in May, I arrived in Berkeley Springs, WV, on June 5th to learn the fundamentals of water judging. The panel of nine judges were trained by Watermaster Extraordinaire Arthur von Wiesenberger and received a Certified Water Taster diploma.

We learned that the appearance, aroma and flavor of water can be affected by where it originated (springs, snowmelt, glaciers, etc.) and what it goes through before we taste it (such as rock types or age). In between tastings, we used water crackers to cleanse our palate. Starbucks standardizes its water so that their coffee tastes the same in every location. New York pizza and bagels, however, are said to the best because of the unique, naturally soft New York water.

In each category, I would be expected to judge the water on:

The competition featured waters sourced in 19 states, three Canadian provinces and fourteen foreign countries. The judging began with the municipal water category. These 11 waters came from municipal water systems from around the globe. In fact, the winner was from Rossarden, Tasmania, Australia, with the US winner hailing from the Metropolitan Water District of Southern California.

The second round was purified water. This category was particularly tough as the purification process produces good-tasting water. The winner of the 6 waters tasted was Ophora Hyper-Oxygenated Water, Santa Barbara, CA. My favorite round was the sparkling water judging. With entries coming from Greece to Korea to the West Indies, the winner of the 13 sparkling waters was Fleck Sparkling Mineral Water, Gibbston, New Zealand.

The final tasting category was the non-carbonated bottled water. I tasted 39 different waters from around the world to help determine who would be crowned the best tasting water. The winner was Ulunom from Shizuoka, Japan, also a previous gold medal winner.

New this year was an online vote for the People’s Choice package design. More than 2,000 people voted on the 12 unique packaging options. The winner was Kariba, from Milton Ontario, Canada, with a resealable aluminum can.

The evening award ceremony announced all the winning waters in each category. Jeanne Mozier, founder of the Berkeley Springs International Water Tasting and Executive Producer, Vice President, Marketing Director and Founder of Travel Berkeley Springs, was posthumously honored with the Lifetime Achievement Award.

“It was another wonderful year for the longest running and largest water tasting in the world,” said von Wiesenberger. “Berkeley Springs is truly the Olympics of water.”

16 Ideas to Find and Keep Employees