The American Jobs Plan: What’s in it for Water Infrastructure? 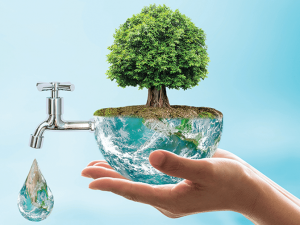 On March 31, President Biden traveled to Pittsburgh, PA, to unveil his plan for catalyzing the nation’s economic recovery from COVID-19. The main component of this plan is a $2.25 trillion (USD) legislative package aimed at getting Americans back to work by the millions, while upgrading our aging infrastructure and meeting the Biden Administration’s goals of advancing equity and climate resilience. Titled the American Jobs Plan, the framework contains provisions that will have wide-ranging effects on every sector of the economy.

Water provisions
Most press coverage of the plan has centered around its more politically contentious initiatives including increased funding for electric vehicle charging and affordable housing – and of course balancing its large price tag against concerns about inflation and the national debt. Taking somewhat of a backseat amidst all the noise, however, is that Biden’s proposal contains historic levels of funding for the water sector.

In total, the plan would provide $111 billion over eight years for water infrastructure projects. $45 billion of the funds will go towards the Drinking Water State Revolving Fund (DWSRF) and Water Infrastructure Investments for the Nation (WIIN) Act grants for the full replacement of lead service lines in the US. This is no small task when you consider that an estimated six to 10 million homes and 400,000 schools and childcare facilities still use lead pipes. The plan also prescribes $56 billion in the form of grants and low-cost flexible loans for upgrades at drinking water, wastewater and stormwater utilities, as well as $10 billion for the monitoring and remediation of PFAS by these systems.

Next steps
Now that President Biden has officially laid out his vision for the package, it will head across town to Capitol Hill for Congress to iron out the specifics. The bill will first be written in the House of Representatives and then sent over to the Senate, an initial step that House Speaker Nancy Pelosi has publicly stated she expects to get done before July 4. The Senate will then take up the bill and make modifications that will be negotiated with the House throughout what is expected to be an incredibly busy summer and fall in Washington.

As was the case with the American Rescue Plan (https://www.whitehouse.gov/american-rescue-plan/) signed into law in March, the House’s first draft will follow the top-line numbers of Biden’s proposal (https://www.whitehouse.gov/briefing-room/statements-releases/2021/03/31/fact-sheet-the-american-jobs-plan/), but specific provisions may deviate. One big question that still looms is whether the package will receive bipartisan support. Lawmakers on both sides of the aisle are certainly in favor of infrastructure spending as a means for economic recovery, but no Republicans have yet voiced support for Biden’s proposal. Regardless of its final form, this package has a strong chance of passing this year.

How YOU can help
If the largest ever federal investment in water infrastructure sounds like a good plan to you, then your Representative and Senators need to hear from you about it! It is a common misconception that calling or writing to your Member of Congress is an intimidating activity. In fact, it is quite an easy, painless experience that can make a big difference. How can you do this? Go to your Representative’s and Senators’ website and submit comments expressing your support for federal water infrastructure investment. This does not have to be a long, well-researched treatise, just one to two paragraphs is ideal; any longer and the message can get muddled. Don’t want to write? Make a phone call to the office’s main line instead. The person on the receiving end will be a kind young staffer whose entire job is fielding constituent feedback. They will simply thank you for reaching out and note your suggestions for their boss and you will have done your part to inform lawmakers on the benefits of investing in water infrastructure.