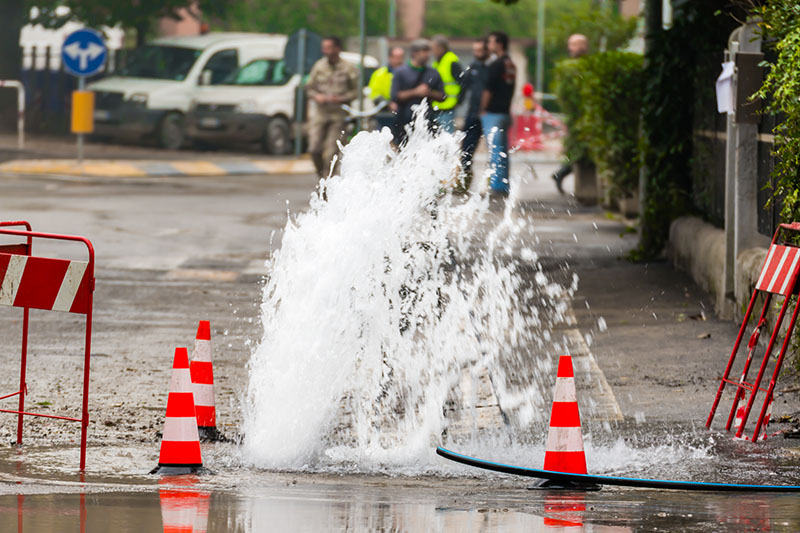 The US water distribution system spans a million miles of underground pipes and is widely recognized as needing continuous upgrade and repair. Distribution system age, changing treatment protocols and climatic events impact the integrity of the distribution system and the quality of the water being transported. Leaky cross connections, leaching contaminants and main breaks occur with regular and yet often unpredictable frequency, supporting the need for a final water treatment barrier at the point of use.

Why do mains break?
Most of us are familiar with the potential for pipes to freeze and break in our own homes. Other extreme climatic conditions, such as droughts and floods, can also cause instability in soil supports for underground pipes, resulting in cross-connection misalignments and pipe breakages. Much of the US distribution pipes are decades old and past their expected lifetime. Many of the current drinking-water distribution infrastructure was built in the post-World War II era in response to rapid population growth and renewed economic stability. Some pipes, however, have been in the ground for centuries.

Many communities have deferred investing in replacing the drinking-water infrastructure despite the inevitable need. From 2012-2018, water main breaks increased by 27 percent and according to the American Water Works Association (AWWA), $1.7 trillion US dollars will be needed over the next three decades to replace our aging, failing infrastructure.1 The vast majority (e.g., 87 percent) of pipes in North America are made of cast iron. This material’s break rate has increased as much as 43 percent in recent years and those numbers have been increasing.2

Smaller utilities are at greatest risk with more than double the break rates compared to larger utilities. Experts estimate that 25 breaks occur every 100 miles per year. The average age of water mains when they fail is 47 years; however, 43 percent of water mains are between 20 and 50 years old, with 28 percent well over 50 years. Retrospective response to these events places the consumer at risk and increases provider costs as they respond in an emergency, rather than a proactive, mode.

Predicting when water mains will break is not an exact science and pipe age isn’t the only variable to consider. Soil corrosivity, installation practices, material types and other factors play a role. Thus, researchers are developing tools for predicting when these events are likely to occur and modeling the relationship between infrastructure deterioration and disease.

Main breaks cause disease
When water distribution pipes break, the potential for contaminants to enter the system is high. Intrusion events, when non-potable water enters the distribution system, can occur anytime there is a drop in pressure within the system.

Based on 2014 surveillance data, the CDC estimates one in 44 US residents are sickened by waterborne diseases each year, resulting in 7.15 million illnesses, 601,000 emergency room visits and 6,630 deaths.3 The top five most common illnesses were swimmer’s ear and infections from gastrointestinal pathogens, including norovirus, Giardia, Cryptosporidium and Campylobacteria, all of which are spread by the fecal-oral route, suggesting contamination at some point from the water source to the final tap.

The proportion of these illnesses that occur due to main breaks is unknown but from 2013-2014, 64 percent of waterborne disease outbreaks in the US were caused by contaminants in the distribution and building plumbing system.4 Breaks or leaks in the water distribution system are the most common reasons for the issuance of a boil-water notice, accounting for 53 percent (see Figure 1).5 The number of boil-water notices in the US has steadily increased from 6,571 recorded in 2012, 6,698 in 2013 and 7,637 in 2014.

Many studies have shown correlations of extreme weather events, broken mains and community disease. One example was in 2010, the year a major water main broke in Massachusetts, affecting the water supply for about two million residents in 30 communities. Despite issuing a boil-water notice to the community, a significant increase in gastrointestinal illnesses and emergency room and hospital outpatient visits was reported in the region over the next seven days.6 Children under the age of five were the most affected. 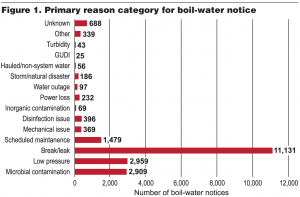 A perfect storm
Recently, the state of Texas experienced a water distribution crisis. On February 12 Texas Governor Greg Abbott issued a Disaster Declaration due to severe winter weather and freezing temperatures in the state. On February 14, President Biden approved federal assistance for the state for immediate needs, including the provision of water to residents. Later, additional funds would be appropriated for the repair of critical infrastructure, including damaged water distribution networks. Access to clean water was lost for millions of Texans as water mains burst and electricity blackouts crippled water treatment plant operations.

Nearly nine million people were under boil-water notices for days to weeks and some of the rural, small-town locales lacked emergency preparedness and communication plans.7 Some residents had no water at all and reported that after the water was turned back on, turbidity, odors and slime were commonly observed. Long after the power was restored in Texas, damage to the water distribution infrastructure continues to be a problem as cracked pipes, disrupted biofilms and compromised treatment processes continued to recover.

Recommended response
Stakeholders agree that a proactive approach to fixing the nation’s failing network of water pipes is essential. In response, the AWWA, in cooperation with utility partners, has developed a resource to evaluate the numerous variables of distribution network failures to model-failure probability.1 With the use of this model, areas of highest vulnerability are prioritized for maintenance or replacement. In addition, the Centers for Disease Control and Prevention (CDC) has developed a communications toolbox for utilities to assist in informing drinking-water stakeholders and consumers about adverse supply distribution events, such as main breaks. Within this toolbox are guidelines and templates for utilities to issue drinking-water advisories before, during and after an event and includes information on the use of POU/POE devices (e.g., RO and distillation units) to manage contamination issues but in a very limited capacity (e.g. related to nitrates removal only).8 For maximum public health protection in the midst of uncertain events, recommendations for the use of POU/POE devices should be expanded as part of a precautionary approach to disease prevention.