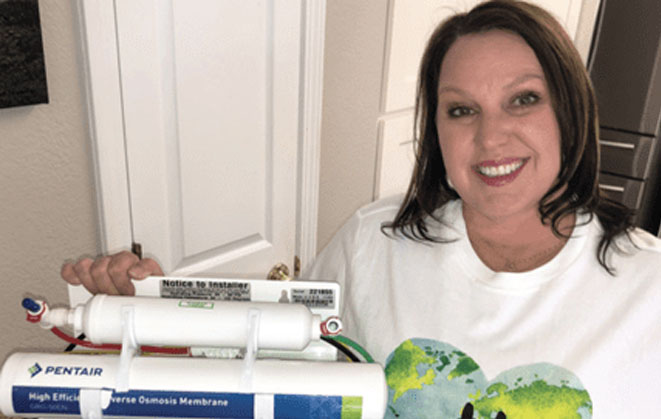 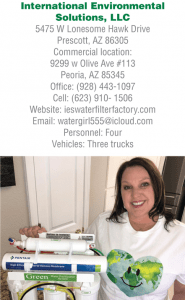 “I wanted to be a doctor, of course,” Cari Miner said. She recognized at an early age how big a role water treatment had with her family. It was their dedication and inspiration, but she never thought it would be for her. After working contently alongside her brother in her father’s company for several years, it became clear to her that this would be her future; it was in her blood.

Verl Moses, Miner’s grandfather, started Moses Pump in 1938, specializing in well-drilling and pump supply. Following in his footsteps, son Ray opened National Filter in 1973, when water treatment was becoming perceived as something of significance. Ray Moses felt passionate about this; he even sold his first car for a water softener when he was a young adult. After becoming a specialist in the water treatment industry, his daughter and son entered the scene. Like father, like daughter, Miner first got her foot in the water treatment industry when she started working for the company in 1985, going on service calls and learning every aspect of the business.

Moses expanded in the early 90s and the company became International Filter. When a second location opened in Las Vegas, NV, Miner had an “Aha!” moment. With new-found independence and success in the company at this location, she realized she simply didn’t have what it took to rock the water treatment world, but she actually rather enjoyed it. Miner ventured out on her own to found International Environmental Solutions (IES) after her father sold International Filter in the early 2000s. Today, IES provides detailed service for both residential and commercial equipment in central and northern Arizona.

Miner found a need in the rural market, including service to small communities, ranches and Indian reservations. She found a passion for these extreme remote areas in Arizona that has driven her love for the industry throughout the years. The company’s mission has been to “provide quality water products for a fair price, top-of-the-line customer service providing honesty and integrity for every customer.” As a natural troubleshooter, Miner created a market dedicated to finding the best solutions for non-functioning equipment. Her goal, to solve customer’s water issues by giving them a variety of options to meet their varying needs, has remained throughout her career.

Miner recalls a time when her father told her to “never let anyone know more than you in this industry.” This struck a chord with her, especially when it came to service. She felt a need to learn and develop her craft as a service technician. Miner herself has primarily handled the Prescott, AZ market, predominantly a retirement community. “It’s always fun to have them watch what I do and go ‘Wow! I can’t believe you’re doing this, you’re a girl!’” she said. Miner purposely tries to amaze her customers. She makes sure her work speaks for itself. Knowing water treatment is a male-driven industry motivates Miner to always stay on top. “I love doing service and taking systems apart and doing the things that aren’t typical for my gender, I absolutely love it,” she said.

As technology in the water industry continues to evolve, Miner finds progressive ways to grow with it. Fascinated with ecology (and being a practicing ecologist), she strives to incorporate green water solutions in her company wherever she can. “There is so much green technology now that they did not have 20 years ago. I am always waiting for something new to better the industry,” Miner said.
IES has made great strides to reduce water waste in the RO process. In the past 10 years, they have turned a five-to-one plus water-to-waste ratio to only 1:1. As people have become more educated on the benefits of RO systems, such as removing nitrates, fluorides, mercury and more, IES has continued to step up its game to ensure a better and less wasteful future, due mainly to the diligence of and technology created by the third generation.

Miner predicts that the water treatment industry will become an essential part of people’s lives in the future. She plans to prepare the fourth generation for these impending demands, including her nephew who works for Charger out of Phoenix, AZ. “I would love to see more interaction with other colleagues, collaborating and working together to expand into the needs of the ecology progression,” she said. Miner is always on the lookout for new opportunities to both expand her business and advance in her own personal knowledge. “I love to see technology improve and evolve,” she said. “My company will always grow with the current technology.”

Miner has felt especially grateful for her roots in the water industry and gaining experience and intelligence through the ones she loves. “This is why I am so passionate about this industry,” she said. “I learned to love the water business and the ability to make people happy by meeting their specific water needs.” Miner looks forward to continuing in-person training provided by the WQA post-pandemic but has been thankful for the opportunities presented during the pandemic as well. “I’m busier than I’ve ever been,” she said. As people have slowed their lives down, they have become more conscious about the water they drink.

Miner and her team are ready for the future of water treatment. On the horizon she sees less waste and more expansion. She plans to expand the business to include wholesale and provide service and technical support to plumbing companies and specialty dealers in northern Arizona. “I used to be a young pup in the industry, now I’m long in the tooth in the industry,” she said. The future of the water treatment industry is bright, so long as Miner continues to inspire both this and the next generation.