A Visionary Who Expanded the World of Water Treatment

William ‘Bill’ Prior was a water treatment visionary. As a young engineer he envisioned the non-electric water softener. Years after founding Kinetico and building it into the leading international water treatment product manufacturer we know today, he envisioned the WQA World Assembly (WAD) Division. Over the years, Prior became a leader in the water treatment industry and was active in the WQA, where he served on the Ethics Committee, the International Committee and the Strategic Planning Committee. When asked for his view on the water treatment industry, Prior once said: “I am an engineer who lost my job and unexpectedly found myself making water softeners.

But people love soft, clean water. They love good drinking water, and how rewarding for us to be part of an industry that actually makes people’s lives better. More than that, the world I found in this industry was so exciting, so fun, that every day has been an adventure.”
Toby Thomas, Kinetico CEO, worked alongside Prior in his later years at the Ohio-based company. “Words cannot describe Bill’s impact on us all and on the industry he helped shape and transform,” said Thomas in a statement after Prior’s death in 2016. “It is truly an honor and privilege to have worked alongside Bill. I take comfort in knowing Bill’s tenacious spirit and deep legacy will live on in the impactful deeds and in the important work we all lead.” This July, Thomas will succeed D.J. Shanahan as the next President of the Water Quality Association.

Kinetico Inc. came into existence 50 years ago when its two founders, Prior and James Kewley, were asked to design a better water softener valve. In 1970, Prior designed and developed the first non-electric, demand-operated, fully-automatic water softener that eventually changed the water treatment industry. The company had long been a world player in water treatment under Prior before its acquisition by Sweden’s Axel Johnson Group in 2006. Today Kinetico is a global manufacturer of water treatment systems for the residential, commercial and OEM markets, serving nearly 100 countries. Recognized for its reliable, economical and sustainable approach to water treatment, the company and its products are used and recommended by millions of people all over the world. Headquartered in Newbury, OH, Kinetico also has offices in Suwanee, GA; Temecula, CA; Canada; France; Denmark and the United Kingdom.

About the man
William Carr Prior was born in Cleveland, OH on February. 14, 1931. He graduated in 1953 from Case Western Reserve with a Bachelor of Science degree in mechanical engineering and business. Upon graduation, Prior served in the US Army Quartermaster Corps. In addition to his work at Kinetico, in 1992, he was a founder and charter member of the World Assembly Division of WQA, including Past Chairman of the division’s Executive Committee and continuing on the division’s Advisory Board of Directors. Prior also served as Chairman of the WQA Small Systems Committee and was a long-time member of the AWWA/WQA Liaison Committee. He was inducted into the WQA Hall of Fame in 1991 and received the Lifetime Membership Award in 1999. Prior spent the last eight years of his career at Tangent Company, Chagrin Falls, OH, a business he founded with the vision of engineering a perpetual supply of safe, clean water through recycling.

In preparing for this article, I contacted Andrew Warnes, Manager, Technical Training, Sloan Valve, Franklin Park IL. Warnes had worked for Kinetico under Prior in the 1980s. In 1997, Warnes succeeded Dan Wyckyoff as Director of the WQA World Assembly Division. At that time, WAD had grown (over 10 years) to 504 members from 64 countries. Member companies represented more than $3 billion in revenue and nearly 10,000 employees. Nearly 80 percent of the World Assembly’s membership came from outside of North America.

In a 2002 article in WC&P Magazine, Warnes discussed the roots of the World Assembly. He wrote: “The idea for establishing World Assembly Division began back in 1992 during a WQA International Committee meeting at Chicago’s O’Hare International Airport. Several WQA members (including Bill Prior of Kinetico, Brett Oleskow of Safe Water Technologies and Bob Taylor of Erie Manufacturing) were there with WQA Executive Director Peter Censky to discuss the future of the organization. The group felt the water treatment industry in the US had matured and that it would be increasingly difficult to find new members here. Most water treatment dealers and manufacturers in the US already belonged to the WQA and they realized that in order to expand, the WQA would need to court members outside of North America.

“They felt,” wrote Warnes, ”that if the WQA could expand internationally, it could become the worldwide platform for standards harmonization across the globe. This would level the playing field for business and encourage the improvement of standards, certifications and promulgation of equipment to ensure better household drinking water quality in developed as well as developing countries. They also felt WQA membership represented a ‘community’ of people who knew each other, worked together and who cooperated for the benefit of the industry and its customers. And they thought it would be wonderful to be able to offer the benefits of this community to other companies around the world.”

Prior (then Chairman of the WQA International Committee) and Brent Oleskow (who became the first WAD chairman) sold this idea in a series of cross-country trips to meet with WQA leadership. Other international committee chairmen later included K&M Plastic’s Charles Poellet and Aquion Partners/Rainsoft’s Robert Ruhstorfer. NSF International’s Ray Jaglowski became the second WAD Chairman. “From the beginning, there were big disagreements over what direction this new effort should take. Some felt that it was part of the WQA and would serve to support overseas members as what was basically a US organization. Others felt it should be built into a global organization of water treatment organizations of which WQA should be a member.” In our recent interview, Warnes recalled, “Prior really had to fight hard to get the World Assembly going.” (Editor’s note: Warnes left WQA in 2004, after which the World Assembly faded away and the association went back to its domestic roots. A new international allegiance was soon forged by WQA with RAI around Aquatech trade shows.) 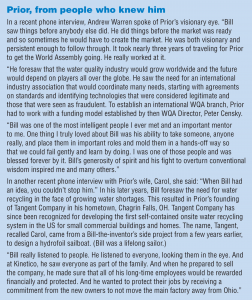 In the September 2001 issue of WC&P, then Executive Editor, Carlos David Mogollón had written about the departure of the first World Assembly Director, Wyckoff, who had held the position since 1997. According to Mogollón, Wyckoff had expressed, “There’s always been different opinions as to what the WQA and World Assembly’s long-term relationship should be.” He noted that “some US dealers complained about WQA spending on World Assembly Division with little benefit to their business, while the WQA Board of Governors continued to press WAD to remain self-sustaining. Other complaints: Membership had leveled off with foreign members. WAD committees were made up mostly of Americans and meetings held largely in the United States. To its credit, WAD had sponsored trade shows in Mexico, Singapore, Amsterdam and Brazil. And it promoted regulatory harmonization, improved delivery of education programs and foreign WQA chapters, with degrees of success during several periods of financial turmoil globally.”
Mogollón also wrote of Prior’s view of the World Assembly’s future in 2001. “Revolutionary change is in order,” said Prior, who had written a report on the subject to Danny Taragan of Israel’s Tana Industries. In it, Prior laid out a case for restructuring the WQA as an international manufacturers association that supported autonomous national chapters focused mainly on dealers and sales distribution channels. As factors supporting this, he pointed to consolidation and globalization of a manufacturing base less focused on the US market, dissatisfaction of US dealers with a diminished role in WQA, a perception that WQA is simply “a US organization meddling in international affairs” with few non-US participants and a lack of effective voice for them in governance, and growing competition from other associations on a global scale. Prior proposed a series of meetings coordinated with a consultant in a six-month effort to redefine the WQA and develop a new entity that would more aptly capture the breadth of a booming global industry. Prior likened this to the type of visionary thinking that led to the merging of the WCAI and WCF in 1974 that created the WQA.

In the same 2001 article, WC&P’s Mogollon wrote that WQA leadership was not ready for Prior’s call for revolutionary change in the World Assembly’s structure. Then WQA president, C.R. Hall, expressed that Prior’s World Assembly vision of an industry umbrella was “too far ahead of the curve.”

Conclusion
Prior was born on Valentine’s Day and all who knew him (and especially those who worked with him at Kinetico), remember him for his big heart, generosity and foresight that drove the growth of the successful international company he founded. His vision for a worldwide water treatment industry was initially seen as overreach by some, but cemented his reputation as a man ahead of this time. “Just between us girls,” Prior confided in 1992 to this humble reporter over the phone. He was one of a kind.