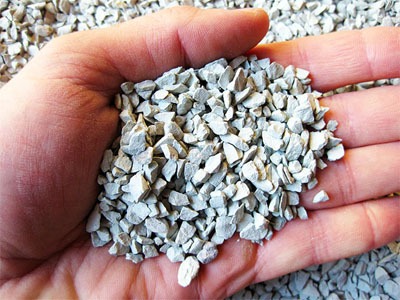 Technology is constantly evolving and changing to meet the needs of humanity, and one of those needs is for clean water. The water treatment industry is always researching, testing and developing new and improved methods with which to treat wastewater and drinking water that are both efficient and environmentally friendly. Zeolite water filtration media can be a sustainable, natural treatment solution for drinking water, greywater and wastewater treatment.

Certain zeolites possess unique and outstanding physical and chemical properties. These characteristics make them very useful in a variety of applications including agronomy, ecology, certain manufacturing, industrial processes, medicine and cosmetics. Recently, a more specific application of one naturally occurring zeolite material, clinoptilolite, has been widely studied in water treatment and human medicine. Due to a number of positive effects on health, including detoxification properties, the usage of clinoptilolite-based products in vivo has increased enormously. Concerns, however, have been raised about the safety of clinoptilolite materials for in vivo applications.

For hundreds of years, humans have utilized the resources provided by nature to improve quality of life. Sometimes we use them in the way that they are available in the environment and other times we find new and innovative ways they can be implemented. For instance, sand and charcoal are typical examples of this. We utilize these in water treatment as filter media. Sand accomplishes this in nature, reducing combinations of particles. Charcoal has primarily been seen as a carrier of heat energy until recent years. Now it is used in any number of products, from skin care to vitamin supplements. It has also been proven to be an effective filter media for water contaminated with certain toxins and other contaminants. Let’s focus now on the zeolite mineral. 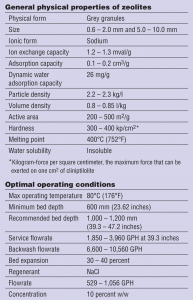 What is zeolite?
When volcanic rock or ash reacts with alkaline waters, it can form zeolite. The word zeolite has been used to describe different types of zeolites, tuffs and clays. In water treatment, the most common is the clinoptilolite family aluminosilicates, made of varying concentrations of aluminum silica, oxygen and other elements like calcium (Ca), potassium (K) and sodium (Na). Their structure and composition can make them microporous and highly inclined for cation exchange capabilities. The degree of such exchange properties varies from type to type and are noticeably weaker in naturally occurring zeolites due to potential impurities. Zeolites can, however, easily be produced synthetically with a heated solution of alumina, silica and sodium hydroxide. The mineral assemblies of the most common zeolite occurrences in nature are clinoptilolite- and mordenite-containing tuffs, in which the zeolite clinoptilolite and mordenite content is high (80 percent or more).

Based on the unique physico-chemical, adsorption and ion exchange properties, zeolites are among the most important inorganic cation exchangers and are used in industrial applications for water and wastewater treatment, catalysis, nuclear waste, agriculture, animal feed additives and in biochemical applications. The variety of zeolite applications is indeed a consequence of their porous structure: pores form negatively charged channels and cavities, which are occupied with positively charged alkali and alkali earth monovalent (i.e., Na,+, K+) and divalent (i.e., Ca2+) ions, OH-groups or H2O molecules that can be easily exchanged by other molecules and cations from the surroundings. It is logical then that the final Si/Al ratio in a zeolite determines the ion exchange capacity and attraction of cations that come to reside inside the pores and channels.

What makes zeolite water treatment media a good filter media?
When it comes to filters, the more pores within the treatment media, the more efficient the filtration performance. Zeolites, and in particular clinoptilolite media, have many pores, therefore they do not just capture particles between grains, they also can adsorb them onto the surface of the media to capture them. This is done in part by the zeolite minerals capacity for cation exchange, whereby it takes on positive ions from the water (i.e., dissolved metals, sodium, ammonia) and replaces them with something else that was already attached to the media’s ion exchange sites.

Due to its high pore density, zeolite has a highly effective surface area, meaning it can capture high concentrations of physical contaminants before backwashing is needed. The media can also use the process of adsorption to capture and remove certain particles. This process is an active effect where particles adhere to the surface of the media instead of passively getting caught between grains.

General applications and industries served
Water treatment
• Removal of turbidity particles to three to five micron
• Removal of heavy metal cations, certain hydrocarbons and other contaminants
• Can be used as a direct replacement media for sand filtration system with 2.8x sediment loading capacity

Affinity for ammonia and heavy metals
Ammonia and heavy metals are of significant concern in drinking water treatment. Both contaminants are toxic to humans. Coagulation, flocculation and sedimentation may not be enough to remove them to levels adequate for human consumption. Zeolite (the clinoptilolite form in particular) just happens to have an affinity for those molecules and will adsorb and retain them within its molecular pores. It can accomplish this even in the presence of other potential competing ions.

Water softening
Hardness minerals like calcium and magnesium can cause issues in distribution piping systems if they are present in high enough concentrations. At a certain point, however, their concentrations in the water supply reaches an oversaturation level and begins to precipitate out of solution. This can cause scale build-up that may be experienced in homes, which can cause restricted flow to pipes and faucets. Zeolite is also capable of exchanging calcium and magnesium ions in the water, meaning it can double as a softener if it is regenerated with a sodium/potassium brine solution.

Iron removal
If you have ever turned on a faucet and the water that came out was brown, you may have an iron problem. It does not take a very high amount in water, however, to cause color change; too much iron can cause health risks in humans. Therefore, mitigation of iron levels in drinking water is also needed. Sodium zeolite is also capable of reducing iron levels to some degree by way of its adsorption and ion exchange properties.

About the company
Josab India Pvt Ltd, a fully owned subsidiary of Josab Water Solutions AB, Stockholm, Sweden, has been providing safe drinking water solutions in India since its launch in 2012. The company produces and sells products, solutions and services for ecologically sound water purification. Because of the Aqualite™ filter material, large volumes of water can be purified in an ecologically safe way at a low cost, leading to long-term sustainability. The company’s primary focus is on rural areas, where access to safe drinking water is barely minimal. Since its launch in India, Josab’s Aqualite-based technology has been approved and acclaimed by various public and private entities. Currently Josab India is expanding its territories in terms of acquiring market and diversification where the requirement for pure water is pivotal.