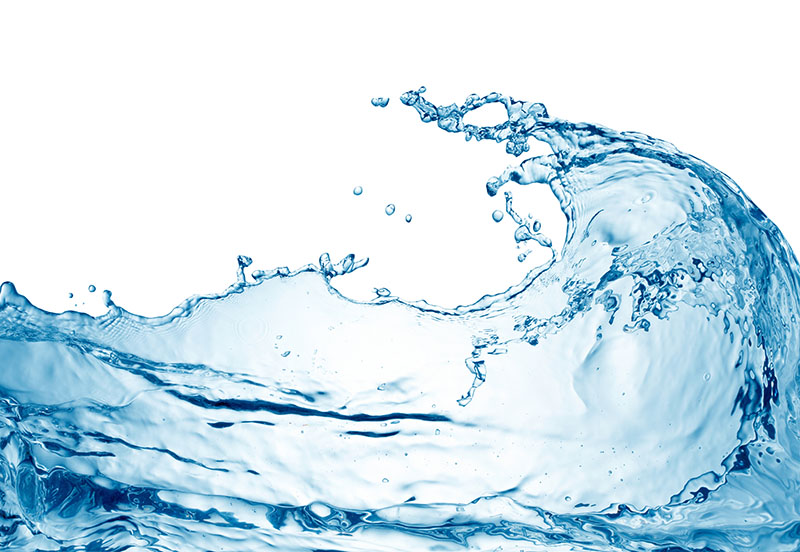 Water softeners are an important part of the POU/POE industry because of the value they provide for end users with hard water, which is relatively common in many areas of North America and beyond. They are also complex pieces of equipment, designed and constructed to provide years of reliable and efficient service. NSF/ANSI 44 Residential Cation Exchange Water Softeners provides a holistic evaluation of multiple aspects of water softeners, allowing manufacturers, distributors, end users and regulators to have confidence in conforming equipment.

Defining the term residential
Water softeners vary in size tremendously, with applications in both residential and commercial / industrial applications. With NSF/ANSI 44 covering residential applications, it is important to clearly define which softeners fall within its scope. The standard defines a residential softener as a regenerable cation exchange system intended for residential use, with conventional plumbing fittings not exceeding 1.25-inch (31.75-mm) NPS (nominal pipe size). So, any softener with an inlet exceeding that size is not considered residential (at least for purposes of NSF/ANSI 44) and falls outside the scope of the standard. Notice that the definition is not related to resin tank size, amount of cation exchange resin, or system salt settings, but is based solely on the inlet size. 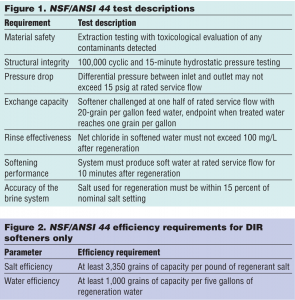 Testing requirements
A summary of the testing requirements of NSF/ANSI 44 is included in Figure 1. A material extraction test is required to establish that no contaminants leach from the softener at concentrations of toxicological concern. 100,000 cyclic and 15-minute hydrostatic tests are required to establish the long-term durability of the system, as well as its resistance to pressure spikes. A pressure-drop test confirms that the softener will not cause a drop of more than 15 psi in-line pressure when operated at the manufacturer’s rated service flow.
Softener capacity is determined by testing at one half of the manufacturer’s rated service flow. The feed water must have a hardness of 20 ± 2 grains per gallon. Capacity testing is required at the lowest and highest salt settings, as well as the setting closest to the midpoint of the range of salt settings. Capacity for other non-tested salt settings is interpolated from the three measured capacities. Extrapolation is not allowed, so testing at the low and high salt settings is critical. Each test of capacity is conducted by first regenerating with a precisely measured amount of saturated brine. The softener’s brine system is not utilized for this testing due to potential variation in the amount of regenerant salt resulting from use of the brine system and resulting contribution to variation in the tested capacity.

The endpoint of the test is defined as breakthrough of one grain per gallon in the softened water. The hardness leakage throughout the run is measured and accounted for, so the capacity is reflective of the precise amount of hardness removed. In order to complete the test, three successive runs within 10 percent of the average of the three runs are required, with the average value being considered the official capacity at that salt setting.

During capacity testing, the amount of residual chloride in the softened water is measured after regeneration. The net increase in chloride concentration from the softener may not exceed 100 mg/L. This indicates that the rinse is sufficient to rid the softened water of excess salt. A separate test known as softening performance is also required. This test involves regeneration of the softener at the lowest salt setting and operation at the manufacturer’s rated service flow. Samples of product water are taken each minute for 10 minutes and the hardness of the water may not exceed one grain per gallon for any of these samples.

Because the brine system is not used when conducting capacity testing, accuracy of the brine system is determined through a separate test. This testing is conducted at the lowest and highest salt settings, as well as the setting closest to the midpoint of the range. It involves weighing the brine tank before and after regenerations to determine the amount of salt used and three successive runs within 15 percent of the nominal salt setting must be achieved. For example, a 10-lb (4.53-kg) salt setting successful brine accuracy test would require the weight of the brine tank to decrease by 8.5- to 11.5-lb (3.85- to 5.21-kg) after each regeneration, for a series of three regenerations. There is an alternate procedure that may be used for time-controlled brine systems, involving calculations based on saturated brine.

Efficiency of softeners
Efficiency of salt and water usage can be established for demand initiated regeneration (DIR) water softeners. Efficiency is based on the amount of hardness capacity per amount of regenerant salt and per volume of regenerant water. Efficient softeners require less salt and regenerant water to achieve the same amount of softening capacity compared to less efficient softeners. This results in less water consumption and less salinity added to the softener discharge (and ultimately the environment). Although efficiency is optional according to the standard, it may be required by state or local regulations.

The efficiency of all softeners varies with the amount of salt used for regeneration. The higher the salt dosage, the lower the salt efficiency. There are diminishing returns in terms of softening capacity for regenerating with more and more salt. In fact, there is a saturation point at which additional salt used in regeneration will not achieve any more softening capacity and will simply be rinsed out of the system. In light of this variation, efficiency ratings are always associated with specific salt settings.

Conformance by calculation
NSF/ANSI 44 includes procedures to calculate pressure drop, capacity and efficiency for softeners that are similar to the tested model, but are not actually tested themselves. There are specific requirements for softeners to be considered similar, including:

These requirements allow conformance to the standard to be established for a family of softeners built with the same control valve but varying in tank size and media volume, based on testing one or a few of them. Calculations included in the standard are used to calculate pressure drop, capacity and efficiency for the non-tested models.

A thorough evaluation for all stakeholders
NSF/ANSI 44 requires testing all relevant aspects of water softeners, from material safety to structural integrity to softening capacity to accuracy of the brine system. This means that a number of tests are required, each one designed to evaluate different aspects. Evaluation of all of these various aspects of softeners provides confidence in the functionality of this equipment for end users, manufacturers, distributors and regulators.