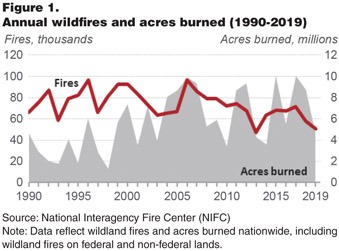 Living in the southwestern United States since the summer of 2003 has brought to me heightened awareness and (unfortunately) first-hand experience to the news and the effects of wildfires. This year seems to be an unusually aggressive season pertaining to wildfires, starting with the latest 2019-2020 Australian fire (known as Black Summer) and now into the most recent 2020 wildfire season in the US. In California, a state of emergency was called on September 28 in response to significant wildfires burning throughout the state, especially in Napa, Sonoma and Shasta counties. (California ranks the highest in terms of properties at risk to undergo damage due to wildfires).1

Cost associated with these fires are staggering, in which for all of the 2018 wildfire season cost $24 billion (USD), overtaking the previous record set in 2017 of roughly $16 billion, all primarily associated with buildings and infrastructure, as well as firefighting costs. In Australia this past wildfire season, there were over 46 million acres burned, which led to roughly 6,000 structures being destroyed, with significant loss to wildlife in the regions affected. 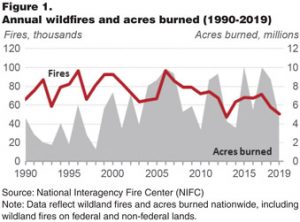 Perspective
Forested land makes up over 766 million acres representing roughly 33 percent of the total land mass in the US. Additionally, roughly 53 percent of the US water supply is surrounded by this forest land.2 In the US over the past 10 years, (on average) there have been 64,000 wildfires, burning just under seven million acres every year. As of October 1, there have been over 44,000 wildfires across the country, burning nearly eight million acres in the current season, causing this to be an above-average burn season.

Of significant note, when looking at the numbers dating back to 1990, where there was a higher number of annual fires (nearly 79,000), the damage due to these fires was less than half (averaging just over three million acres burned) of what we have been experiencing in the last 10 years.3 In short, a growing number of Americans is being directly affected by the effects of these wildfires.
According to the US Department of of Interior, almost 90 percent of the wildfires that occur annually are caused by unintended human interaction (people as opposed to nature). All too often we hear about fires being caused by improper campfire management, cigarettes, off-road vehicle exhaust, fireworks. In the case of the deadliest and most destructive fire in California, a downed electrical power line was determined to be the cause.

Camp Fire and Paradise California
In 2018, a fire ignited by a faulty electrical transmission line started in northern California’s Butte County and quickly became the deadliest and most destructive wildfire in the state’s history. Covering nearly 155,000 acres and destroying almost 19,000 structures, the towns of Paradise and Concow were significantly impacted, having large portions of their towns lost due to fire. It was not until several months after the fire that I would start to understand the serious impact of wildfires on water distribution and quality. Following the fire, an associate living in the general area reached out in order to inquire about drinking water treatment for those affected, which led to a conversation with the Paradise Irrigation District manager in order to obtain additional information about general water quality there.

Restoring pressure
The City of Paradise and the Paradise Irrigation District worked for several months just to re-establish pressure within the distribution system. Due to the intense heat and significant number of buildings destroyed by the fire, the district had to work to get the water treatment plant up and running just to identify where there were leaks within the system. Initial repairs of damaged and open water lines (where visible) were initially conducted, followed by water plant start-up, which revealed more serious damage underground (due to the heat of the fire), as well as at the water mains and other distribution breaches.

Once identified, these areas were repaired and the process was started up again where the next group of leak points were identified. From there the district would repair again and then go through the entire process for the next several months until finally the treatment system was contained and able to hold pressure. Once the treatment system was back up and running, samples were taken of the water in order to establish overall quality. There were a number of factors in play which were impacting the overall water quality of the system.

VOC cocktail
Initial reports indicated significant levels of benzene in the water; however, there were also several other contaminants that were frequently mentioned as the ‘VOC cocktail.’ While inconclusive as to pinpoint from where the benzene was originating, several reports identified a few culprits, such as melted plastic service lines and burnt water meters; various burning materials from within the destroyed buildings were thought to be the main culprit. These various materials that were burning may have been sucked into the water distribution system during or after the fire, as system operators worked to get the system back up and pressurized. On average, benzene levels in the water tested around 31 ppb, with a few initial test results prior to continued flushing of the system coming in much higher than that. (Federally US EPA has set an MCL for benzene at five ppb; the MCLG is zero. The state of California’s regulatory level for benzene is even lower at one ppb.)

During a forest fire, especially during ones that burn hot, there are significant amounts of dissolved organic matter (DOM) that work their way into the source water. This significant increase in DOM creates a burden on the normal coagulation/flocculation or other settling equipment utilized during standard operation. (In a research study awarded by US EPA to Clemson University, a study of the effects of wildfires on drinking water was undertaken).4

Similar to what was observed in the Paradise Irrigation District, not only were there increases in detected benzene but also an increase in DBPs due to this excessive DOM loading. Water systems affected by wildfires need to be flushed and disinfection increased for the entire system. Increase of chlorine usage, in conjunction with this increase in DOM creates a perfect formula for DBPs developing within the distribution system. Free chlorine reacting with organic material results in the development of increased DBPs, especially in the form of trihalomethanes (chloroform–TTHM) and haloacetic acids (HAA).

What we have learned
Not all wildfires are as severe as the Camp Fire, so not every community affected by wildfire will have the same results; however, the last few years have shed some light on issues created by wildfires and drinking water. First, we have a better understanding of what parameters to look for and what are the precursors. DBPs and other VOCs should be evaluated soon after a water system is up and running following a fire, especially if the fire is considered a significantly hot burn. Communities hit by wildfires have a wide array of issues to face. In cases where homes and other buildings are destroyed, just setting up shelter and finding clothes and food become a daily struggle. Initially, people turn to bottled water and tankers as their only water source for everything from drinking and cooking to bathing and laundry.

Currently there are a number of initiatives within our industry that are bringing to light the concept of POE and POU final-barrier treatment options. A greater focus is underway to investigate small community Safe Drinking Water Act-compliance achievement through POU and POE systems. Looking for solutions for communities affected by 1,2,3-TCP is moving forward with an initiative to include this testing in Standard 53 for certification. Additional work will also need to be done to establish testing parameters for POE systems, since VOCs should be addressed for the whole-house POE systems.

Conclusion
Fires are projected to become bigger and more frequent, leading to an increased focus on their aftermath. As regulatory issues arise, especially for small rural communities, greater opportunities will become apparent where we, the water filtration industry, can step up and lend a helping hand to provide safe, clean and affordable water to these communities in dire need.