The ongoing 2019 novel coronavirus outbreak reminds us how rapidly infectious agents can travel the globe. Today it is possible to be anywhere in the world within hours. Our increasingly mobile society means that diseases that used to seem exotic and distant can impact any population. Of the 50 most deadly infectious diseases, approximately a third may be transmitted by drinking water. 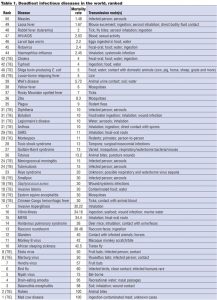 The top deadliest diseases from drinking water
The following is a summary of the top deadliest diseases known to infect humans that have a waterborne transmission route ranked from the least to most deadly (numbers in parentheses indicate ranking). Table 1 includes these and other infections that made the list, considering all transmission routes.1
Lassa fever (49) was originally discovered in the late ’60s in Lassa, Nigeria. That country reported that a new outbreak began in January 2020 with over 1,700 new cases suspected. An estimated 300,000 infections occur annually.2 Although primarily endemic in West Africa, rodents are an intermediate host and can transmit the disease to people. Ingestion of contaminated food and water is another common transmission route. Symptoms may progress to hemorrhaging, fever and multiple organ failure.
Rabbit fever (48), also known as tularemia, is caused by the bacterium Francisella tularensis. This highly contagious organism causes an average of 126 cases per year in the US. Tularemia can be spread through arthropod bites, contact with infected animal tissues, inhalation of contaminated aerosols and ingestion of contaminated food or water. Historically, F. tularensis has been utilized as a bioweapon. Thus, officials monitor carefully for increases that might indicate foul play.
Taenia solium (46) is a type of tapeworm found in pork whose larval stage causes a disease known as cysticercosis. The disease spreads through feces-contaminated food or water from an infected person. Larvae then invade the central nervous system tissues. Endemic in Latin America, cases are routinely diagnosed in US-born residents.3
Rotavirus (45) is the number one cause of childhood diarrhea worldwide. Although the availability of a vaccine dramatically reduced the number of rotavirus deaths, an estimated 215,000 are still attributed to this organism.4
The majority of cholera (42) cases can be treated with oral rehydration solutions but in many areas treatments for the severe, acute watery diarrhea is not available. It is estimated that up to four million cases and 143,000 deaths occur from the bacterium Vibrio cholerae annually. The current (seventh) pandemic hit South Asia in 1962, Africa in 1971 and the Americas in 1991.5
Typhoid fever (42) cases are estimated as high as 22 million with 210,000 deaths annually. Spread via food and water contaminated with Salmonella enterica serotype typhi and paratyphi, it’s the largest global burden in in the developing world.
Shiga toxin-producing Escherichia coli (E. coli) (40) causes severe outbreaks of food and waterborne disease. The disease is usually self-limiting but may progress to bloody diarrhea and the deadly haemolytic uraemic syndrome (HUS), which can result in acute renal failure. Children and the elderly are most at risk.
Botulism (31) is the most deadly toxin known. Produced by the bacterium Clostridium botulinum, the toxin is destroyed by conventional drinking water treatment but can spread via intentional acts of contamination. A powerful neurotoxin, botulism death usually occurs following muscular paralysis and respiratory failure.
Legionnaire’s disease (31) is spread via water aerosols from showers, cooling towers, fountains and hot tubs. The Legionella pneumophila bacteria grows in premise-plumbing systems. The 10,000 cases of Legionnaire’s disease reported in the US annually are thought to be a large underestimation of the true disease burden. The elderly, smokers and people with chronic lung disease are most at risk.
Anthrax (31) spores are produced by the bacterium Bacillus anthracis and are commonly found in soil and infect domestic and wild animals feeding on outdoor plants and grasses. Once inside the human body, the spores become active, multiply and produce potent toxins leading to severe illness and death.
SARS (29) or Severe Acute Respiratory Syndrome (which became a global threat in 2003), is caused by a strain of coronavirus. Symptoms similar to influenza complicate rapid and distinct diagnoses. Respiratory illness is often accompanied by severe diarrhea. Although rare, case-fatality rates may be as high as 50 percent.
Guillain-Barré syndrome (27) is a chronic autoimmune condition that attacks the nerves, causing a paralytic illness similar to polio that can progress to total body paralysis and death. Although the exact cause is unknown, the syndrome often occurs following acute infections from respiratory or waterborne microbes, including influenza, Zika and hepatitis A viruses.
Listeriosis (18) is caused by the food and waterborne bacterium Listeria monocytogenes. Found commonly in soft cheeses and ready-to-eat meat products, infections may become invasive and lead to severe health outcomes including septicemia, meningitis and spontaneous abortion.
MERS (Middle East Respiratory Syndrome) (15), like it’s relative SARS, may be spread by the respiratory and fecal-oral route. First reported in 2012, MERS is the most deadly virus with a possible waterborne route on our list of top 50 infections, with a death rate of over 34 percent.

Minimizing endemic and epidemic waterborne disease
The only disease that has been successfully eradicated from the globe is smallpox. As microbial hazards continue to emerge due to mutations or expanded routes of transmission, efforts to contain their spread will be promoted. Most microbial pathogens spread via potable water supplies can be removed or inactivated by the use of POU drinking water treatment devices. Therefore, POU device technology designed to remove microbes is recommended to control endemic and epidemic illness risks.