One of the technologies used to treat PFAS in water is anion exchange. Recognizing the relevance and importance of this technology in combating the growing occurrence and detection of PFAS in water, the NSF Joint Committee on Drinking Water Treatment Units looked to develop a robust, repeatable and reproducible test method for testing reduction of two specific PFAS compounds: perfluorocctanoic acid (PFOA) and perfluoroctane sulfonate (PFOS) in drinking water. As a result of these efforts, NSF/ANSI 53 Drinking Water Treatment Units–Health Effects 2019 includes criteria for testing and establishing a performance reduction claim for PFOA and PFOS for nonregenerable drinking-water treatment devices that use anion exchange media. The requirements were added to the standard as Section 7.2.6.

Very specific test water
The concentration of PFOA and PFOS in the test water, as well as the required maximum level in the treated (effluent) water, is described in Figure 1. The performance of ion exchange resins in treating contaminants in water is influenced by the composition of the water, especially the concentrations of various dissolved ions. Ion exchange resins can be developed to be more selective to certain ions, but the selectivity is not perfect. Other ions present in the water can and do interfere with the reduction of the targeted ions. For this reason, it is important to include potentially interfering ions in the test water when testing this technology for its effectiveness. By including these other ions, the test method is made more robust and provides more confidence that the ion exchange resin will be effective across a broader range of potential water composition in the field. 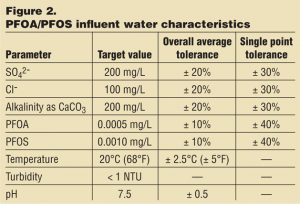 With this in mind, the test water for testing anion exchange systems for reduction of PFOA and PFOS includes sulfate, chloride and alkalinity. The water is created by starting with RO/DI water and adding reagent chemicals to it to reach specified concentrations and parameters. The desired sulfate concentration is achieved by adding magnesium sulfate, with an option to substitute some sodium sulfate for magnesium sulfate if the magnesium hardness is an issue for the product being tested. The alkalinity is derived from sodium bicarbonate. The chloride is added in the form of sodium chloride, keeping in mind that hydrochloric acid may be used to adjust the pH if it is too high, which is also a source of chloride. If the pH is too low, sodium hydroxide is used to raise it. Final specifications of the test water are described in Figure 2.

Testing using the typical testing method
The test method itself is typical of other contaminant reduction tests in NSF/ANSI 53. It is conducted to 200 percent of the system’s rated treatment capacity based on volume, unless there is a performance indication device (PID) that warns the user when capacity has been reached. When a PID is present, the test is conducted to 120 percent of the system’s rated capacity. Samples of the challenge water and the treated water are collected at six points throughout the test, with the requirement that no treated water samples exceed the maximum effluent concentration as indicated in Figure 1. Two units are tested and both must pass.

There is also a test method for batch-type pour-through systems, similar to other contaminant reduction tests in NSF/ANSI 53. These systems are tested by manually processing complete batches, with the flow through the filter occurring as it would when the system is operated by an end user, according to the manufacturer’s use pattern, although with no more than a 75-minute rest period between batches. Continuous drip-feed of the influent challenge water is not permitted and would not be in accordance with the standard. Filtering of batches may occur up to 16 hours per day, with an eight-hour rest period overnight.

Sports bottle-type filtration systems can also be tested per the methods used in NSF/ANSI 53 for testing reduction of other contaminants, with separate test methods for squeeze type (soft-sided bottle) and mouth-drawn (hard-sided bottle) types of sports bottles. Squeeze-type sports bottles are tested using a mechanical gripper/squeezer test rig, whereas mouth-drawn sports bottles are tested using a peristaltic pump to draw water through the system. Once again, testing can occur up to 16 hours per day, with an eight-hour rest period overnight.

Addressing relevant technologies
There are many different technologies used for water treatment. Each of these technologies has various capabilities, advantages, disadvantages and limitations. As the NSF Joint Committee on Drinking Water Treatment Units considers expansion of the standards to include emerging contaminants, it is important to focus on all of the various applicable technologies. With the 2019 version of NSF/ANSI 53, the NSF/ANSI Drinking Water Treatment Units Standards now include requirements for reduction of PFOA/PFOS for nonregenerable anion exchange systems, in addition to the test methods previously developed for activated carbon systems under NSF/ANSI 53 and for reverse osmosis systems under NSF/ANSI 58.

By developing test methods to evaluate multiple technologies, end users benefit because they can consider more capabilities, advantages, disadvantages and limitations as they evaluate which technology will best fit their water treatment needs. Expanded choices mean better optimization of resources and outcomes. These considerations are front and center for the NSF Joint Committee as they prioritize their agenda for ongoing developments for the NSF/ANSI DWTU Standards.