There are many rules of thumb and general opinions about iron removal by softeners. Some dealers claim excellent removal, others are skeptical and one on-line advertisement claims that regeneration with soft water (as with a twin softener) somehow magically makes the salt brine work better to prevent iron fouling. The following is a brief discussion about iron and how it interacts with water-softening resins.

Iron in water is found in several different forms. In well waters, especially deep wells that do not contain much oxygen, iron is commonly found in its divalent or ferrous state. This type of iron is commonly known as clear-water iron. Ferrous iron can exist at both high and low pH but is more stable when pH is less than 7. In surface waters, unless the pH is substantially less than 7, iron is most likely in its trivalent or ferric state, either as an insoluble but filterable precipitant or combined with various naturally occurring organics and dissolved, but not present, in a form that can be removed by softening resins. A few surface waters where pH is down below 6 can maintain ferrous iron even when oxygen is present. Using a water softener to remove ferrous iron from low pH waters should be done prior to raising the pH in order to ensure the iron remains in its soluble (ferrous) form. 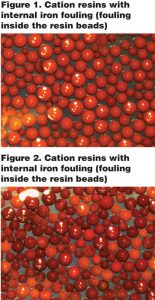 The removal of insoluble ferric iron by water softeners is especially problematic. Iron particles tend to be small, especially ones that formed when ferrous iron was exposed to air and oxidized to insoluble ferric iron. Softening resins filter to approximately two microns in size but ferric iron particles are often smaller than one micron. Some removal occurs but isn’t predictable. Depending on particle size, flowrate and resin size and uniformity, removal can be as little as 10 percent or as much as 90 percent with 25- to 75-percent removal more typical. Fine-mesh resins do better than larger resins and resins with irregular surfaces also do better at particulate iron removal than resins that win a beauty contest.

Because the typical regeneration sequence for a softener does not do much to remove particulate iron, there is a high likelihood that iron will build up in the resin bed, clog up the spaces between resin beads and lead to either high pressure loss, short circuiting (reduced capacity) or both. The better the resin does as a filter, the more likely it is to become fouled by the iron. Softeners that are fouled don’t work very well and lead to unhappy customers and costly house calls. For this reason, many dealers shy away from making claims about iron removal by water softeners and recommend prefiltration instead of using the softener to remove iron.

Nonetheless, IX resins are used for their filtration properties and can be used to remove particulate iron. In this case the softener should be viewed as a filter and the usual guidelines for loading and filter cleaning apply. Coagulation may be needed to make the iron particles agglomerate into larger flow that can be filtered out. Since physical cleaning requirements are a lot different than a chemical regeneration, a different sequence should be used that is optimized for physical cleaning. Even so, some compromise occurs when two unit processes are combined into one device. All in all, when particulate iron is present, it is probably better to remove it in a separate filtration step, followed by the softener. 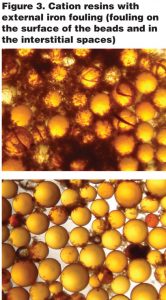 Soluble (ferrous) iron is exchanged by water softening resins in the same way as the hardness ions, calcium and magnesium. The affinity of ferrous iron for softener resins is somewhat lower than calcium and a bit higher than magnesium. Iron exchanges into the resin just like hardness does. The issue is with regeneration. When water is added to the brine tank, it is invariably exposed to air and picks up oxygen. When the oxygen in the brine meets the ferrous iron being regenerated out of the resin, ferrous iron will oxidize to ferric iron and precipitate. The precipitation occurs at the surface of the resin beads, interfering with the exchange of hardness ions and the resulting particulate iron acts like a sponge to hold up and release the various other ions in the feed.

Some iron is purged during the backwash cycle that normally precedes brine injection. This step is usually not long enough or aggressive enough to remove all the suspended iron from the resin bed. Turbulators and innovations such as vortex plates help improve backwash but many softeners have screens on the water inlet to prevent resin loss, thus defeating the ability of the backwash flow to purge suspended solids.

Limiting iron loading minimizes risk. Resin cleaners minimize ferric iron formation and help prevent fouling. Sulfite works by preventing ferrous iron from converting to ferric, while phosphate sequesters ferric iron and keeps it soluble. These cleaners are typically used at small doses and can only partly compensate. They are not usually used at high enough doses to remove foulants that have already formed.

Overall, we can adopt much the same guidelines as used in the membrane industry. For ferric iron:
1. < 0.1 ppm iron and any oxygen level = negligible risk of fouling
2. 0.1 ppm to 1.0 ppm iron and any oxygen level = some risk but possibly manageable
3. > 1.0 ppm iron and any oxygen level = significant risk of fouling, even with frequent backwash; prefiltration to remove iron strongly advised
For ferrous iron:
1. Any level of soluble iron and essentially no oxygen present (< 0.1 mg/L) = negligible risk
a. Oxygen must be excluded both in the service and in the regeneration cycles
2. Where oxygen cannot be excluded
a. Compensate for soluble iron by reducing throughput to prevent overloading.
a.i. The most common means of compensation is to add two or three grains of compensation for every one
ppm of soluble iron
b. Use a resin cleaner with every regeneration
b.i. Sulfite or phosphate-based types are best
b.2. Cleaners cannot compensate for more than one or two mg/L of iron
Systems are more resistant to iron fouling when
1. They regenerate frequently
2. They employ reduced-size resins
3. They use iron cleaners or additives
4. They are specifically designed to handle high iron loads and have cleaning cycles designed to purge the iron

Parting thoughts
Precipitated iron doesn’t re-dissolve nearly as quickly or completely as it forms. It is much better to prevent it from precipitating in the first place but if it isn’t possible to do this, then the system should be specifically designed to handle iron as a suspended solid. Trying to clean a badly iron-fouled resin bed is fighting a losing battle. It’s likely more cost-effective to change out the resin. Large iron rust particles that flake off of upstream piping systems and fall into the resin bed aren’t going anywhere; they are probably going to stay there until the next resin change-out. Although unsightly, these larger pieces of iron often cause no problems at all.

By the way, typical water softener salt has at least a thousand ppm of hardness already in it. Softening the brine dilution water does little to change the ratio of hardness to sodium. Soft water is beneficial in counter-current industrial softeners, where the lowest possible hardness leakage is desired but has little or no benefit in residential softeners and certainly does not help prevent iron fouling.

Peter Meyers, Technical Director for ResinTech, Inc., has a fascination with ion exchange that began in high-school chemistry class and has never ended. During a career that now spans nearly a half-century, Meyers has experienced virtually every aspect ion exchange, from engineering and process design to field installation, start-up and troubleshooting. His passion for water treatment has made him one of the industry’s most prolific and sought-after speakers and authors. Meyers has presented around the world on a wide range of ion exchange topics from demineralization, polishing and softening to industrial process design and operation.