A new report on the inevitable risk of massive disease outbreaks from environmentally transmitted microbes is a reminder of the need to predict, plan and prepare for the future. The greatest concern is over the next Ebola emergence or a pending mutant influenza strain that will require global preparedness coordination efforts. Less exotic diseases, however, are circulating now, causing substantial illness and death and becoming more resistant to treatments. These diseases are amenable to proactive prevention with familiar control options.

An ounce of prevention
A common theme in this column parallels the saying: “An ounce of prevention is worth a pound of cure.” Spoken by Benjamin Franklin and often restated in relationship to healthcare, the adage comes from his 1736 speech encouraging the formation of the first organized community fire-response team in Philadelphia, also known as the Bucket Brigade.1 The value in an ounce of prevention is not limited to health or fire safety but is also applicable to water quality. Invisible, tasteless and odorless hazards in drinking water are known to cause tens of millions of acute and chronic diseases in the US each year.2 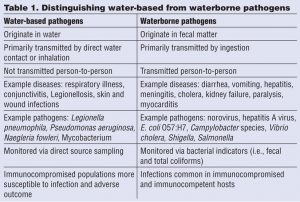 There are over 500 pathogens of concern in drinking water.3 Naturally present water-based pathogens like Legionella, Pseudomonas and Mycobacterium (non-tuberculosis) have emerged as a greater health burden than the frank waterborne pathogens, like Escherichia coli O157:H7 or Cryptosporidium, that are traditionally targeted for monitoring (via indicator organisms) and control. Water-based pathogens have a completely different modus operandi than waterborne pathogens (Table 1). These microbial hazards are naturally present at low levels in water supplies and are amplified through distribution systems and premise plumbing where conditions of stagnation, low disinfectant residuals and heating promote their growth.

Although concentration thresholds have not been defined, control of water-based pathogens is not focused on total elimination but rather growth prevention by monitoring and controlling growth-promoting variables. Drinking-water outbreaks from both waterborne and water-based pathogens are routinely documented and have been increasing in recent years, partly due to a more intentional monitoring effort but also due to some high profile outbreaks.4 Another justification for prioritizing prevention rather that treatment is that opportunistic pathogens are evolving with more antibiotic-resistant genes and becoming more difficult to treat.

Worldwide devastation from microbes
A new report from the Global Preparedness Monitoring Board (GPMB), a team of worldwide public health experts, warns of the potential for a pandemic outbreak of infectious disease from a yet to emerge flu-like illness known as ‘disease X.’ The report, A World at Risk, focuses on the potential for a highly virulent, person-to-person transmitted respiratory virus to rapidly spread and kill an estimated 80 million people in less than two days.5

History proves that such devastating outbreaks do occur. The 1918 Spanish flu infected an estimated 500 million people worldwide, killing 50 million or more, including nearly 700,000 Americans.6 A scenario is anticipated in the future where a mutant virus, able to evade immune defenses, emerges to cause similar devastation unless preparedness measures are placed in advance. 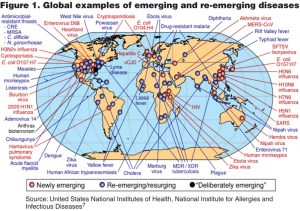 In fact, the World Health Organization (WHO) warns that another pandemic flu is inevitable. The GPMB report is critical of world leaders, especially those from some of the wealthiest countries, for neglecting to respond proactively to health emergencies or to invest in preparedness tools. From 2011 to 2018, WHO documented 1,483 events of epidemic disease outbreaks in 172 countries.5 Figure 1 provides a geographic visual of emerging and re-emerging pathogens over the past 50 years. This chart demonstrates the widespread nature of microbial diseases and the need for global engagement in prevention activities. Included are emerging diseases spread by insects (vectorborne) and water routes (see Table 2). 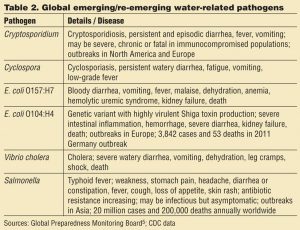 Proactive controls
Because waterborne diseases are often transmitted by specific point sources (i.e., household storage tanks and taps) they can be more easily mitigated than the feared ‘disease X’ agents. We must assume that water-contamination events, permissive microbial growth conditions and treatment failures will happen periodically. Preparing for such occurrences, by proactively treating water supplies to prevent contaminant exposures, is a prudent approach at global, municipal and consumer levels. The timing and frequency of drinking-water contamination events are difficult to predict and thus require consistent management at the point of use.