Newark Makes Peace with POU after Crisis of Confidence Fades

Four years ago, when faced with a crisis in spiking lead contamination levels in Flint, MI’s community drinking water, panicked citizens looked to free bottled water as the only immediate solution. At the same time, they at first rejected free, lead-rated POU faucet filters offered by city officials. Why? Many people initially refused to believe that faucet filters work. This crisis of confidence in POU filters was repeated in Newark, NJ recently, where alarming levels of lead were detected in the public water supply. As in Flint, a cry went up for free bottled water and an initial rejection of some 39,000 PUR lead-rated, certified faucet filters purchased by the city. 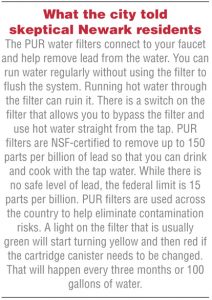 Newark supports POU filters
Newark is the largest city in New Jersey with nearly 300,000 residents. Its water crisis primarily affects its poor and black community. In 2017, more than 13 percent of New Jersey children with elevated lead levels were in Newark, despite just 3.8 percent of the state’s children living there. Unfortunately, the lead levels in the drinking water in Newark are some of the highest in the country that have been recorded in recent years for any city.

In early October, Newark city officials announced thousands of water filters handed out to residents had significantly reduced lead in drinking water to safe levels. Lead contamination had plagued the city for years, spiking even higher in 2019. Over the summer, the Natural Resources Defense Council filed a lawsuit against Newark, accusing it of violating federal safe drinking water laws. The crisis came to a head last summer following a misconception that water filters distributed to residents may not have been effective. Meanwhile, New Jersey officials had signed off on a $120-million bond with Essex County to fast-track the replacement of thousands of contaminated pipes in the city in less than three years.

On October 2, Newark Mayor Ras Baraka held a State of the Water Town Hall meeting. WQA officials, including Global Governmental Affairs Manager David Loveday, were there to answer questions and provide resources during a health fair at the Newark Performing Arts Center. “We want to be sure Newark residents understand the health effects of lead in their drinking water and how to find the most effective treatment options,” Loveday said. “With all the confusion surrounding the use of certified water filters to remove lead, we can provide solid, scientific information for consumers.”

In an October 8 phone interview with WC&P, Loveday reported that over 3,000 Newark citizens attended the town hall meeting. “Mayor Baraka had earlier ordered free bottled water to be distributed until tests of the water filters had been completed, demonstrating that the filters were working. Then he authorized the continuation of the program to provide residents in affected areas to receive some 39,000 lead-certified PUR faucet filters at no cost—over $1 million dollars in product. The mayor deserves a lot of credit,” said Loveday, “for acting quickly to restore the free filters program that he had originally conceived of over a year ago.

“In the early days when the city’s lead problem was first revealed, Mayor Baraka was very transparent and quickly sent out warning letters. Then, without delay he moved for Newark to purchase lead-rated filters for qualified home owners and renters. The city has a helpful database to immediately qualify people who phone in their addresses to determine if their residence had lead service pipes beneath the ground. Other cities should study how Newark handled their lead problem with both transparency and positive remedial action.”

When asked if Newark residents had been adequately informed on how to properly install the filters provided, Loveday was reluctant to criticize the manufacturer or city officials. “Going forward, it is important for the POU filtration industry to provide continuing education, as well as proactive product testing and third-party certification. Also maintenance and monitoring programs need to be put in place to assure the public that POU technologies work. Thanks in part to its continuing role of supplying supplemental support to long-term lead service pipe replacement programs, the POU industry is not soon going away.”

In late September, Newark officials said further testing showed the water filters the city issued to residents were reducing lead levels by 97 percent in tap water, a percentage that rose to 99 percent if residents flushed out the system by running the faucet for five minutes. The US EPA had recommended in August that citizens use bottled water after early testing suggested problems with the filters and WQA backed that recommendation as an appropriate safeguard for Newark residents, particularly children, until more thorough testing was completed.

On October 1, Mayor Ras Baraka commented on the syndicated TV program Democracy Now that most affected Newark homeowners had decided to employ the free PUR filters offered by the city. “I am happy for the thousands of residents of the 18,000 homes that are affected, now using the same water filter that I use in my home.” 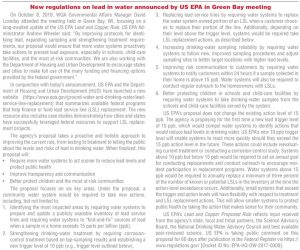 Conclusion
Certified, lead-rated POU faucet filters can remove 97 percent or more of lead in drinking water, if the equipment is installed and maintained properly. That’s a fact. The crisis of confidence experienced in Flint and Newark over free filters distributed to desperate residents need not be repeated when lead problems surface in other communities. The solution is better continuing education by the POU industry. The question is, how will the industry step up?