EWQA Board announced
The Eastern Water Quality Association (EWQA) announced the appointment of four new members to its Board of Directors, during the Opening General Session of the EWQA Annual Convention in September. Each of the new Directors assumes responsibilities effective immediately. Kevin Osborn of Water-Right Corporation (Appleton, WI) is the Northeastern Regional Sales Manager for Water-Right, which is a full-service manufacturer and distributor of brand-name water treatment equipment. Water-Right has been serving the water quality improvement industry since 1959.

Candice Wentling, MWS of Certified Action, is the Director of Certified Action (Nashville, TN) and is a Selling Coach and distributor to the water treatment improvement industry. She has been conducting sales training seminars, field coaching and leadership accountability for the last 13 years.

Josh Wenzel, President of Lancaster Water Group, (Lancaster, PA), a full-service manufacturer and distributor of brand name water treatment equipment, was also elected to the board.

Winsupply promotions announced
Winsupply Inc. has named Eric Roush VP, Supply Chain. Previously Director of Sourcing Services, Roush will lead Winsupply Sourcing Services in fulfilling its mission of providing supply-chain expertise in support of the growth and prosperity of Winsupply’s nearly 600 locations. Roush’s areas of responsibility include the operation of Winsupply’s five distribution centers, central accounting and pricing, vendor incentive program administration, customer care and regional distribution center purchasing. Monte Salsman was appointed President of the newly created Winsupply Acquisitions Group. He was previously President of the Winsupply Local Company Group. The Board of Directors also announced the promotion of Rob Ferguson as President of the Winsupply Local Company Group to fill Salsman’s former role. He was previously VP of Operations and will also be added to the Winsupply Inc. Board of Directors.

Mollenkopf named IWA President
The International Water Association announced Tom Mollenkopf as President-elect of the Association for the period October 2020 until August 2022. He will take office at the end of the IWA World Water Congress & Exhibition 2020 in Copenhagen, Denmark. An Australian national, Mollenkopf has been an active member of the IWA for many years. He became a member following an early professional career in law and he has spent the past 25 years in the water sector. Mollenkopf has been a member of the IWA Board of Directors for the past five years; was Deputy Executive Director of IWA in 2005 and following that, was elected Senior VP twice, in 2014 and 2016. He was invited to serve a further term on the Board in 2018. Mollenkopf takes over the role of President from Diane d’Arras, who has served two terms. 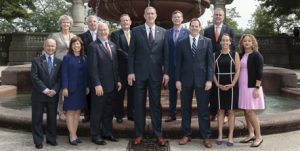 WEF Trustees, Fellows named
The 2019-2020 Board of Trustees was confirmed by WEF’s House of Delegates during WEFTEC® 2019. The WEF gavel of leadership was passed to President Jackie Jarrell, Operations Chief at Charlotte (NC) Water. In her role at Charlotte Water, Jarrell is responsible for the overall management of the operation and maintenance of five wastewater treatment facilities consisting of a total capacity of 123 million GPD. Jarrell also has oversight of regulatory functions, process control, industrial pretreatment and continuous improvement programs within the operations areas. In addition to Jarrell, the 2019-2020 Board of Trustees includes: Past-President Tom Kunetz; President-Elect Lynn Broaddus; Vice President Jamie Eichenberger; Treasurer Keith Hobson and Secretary and WEF Executive Director Walt Marlowe. Trustees are Rajendra Bhattarai; Howard Carter; Aimee Killeen; Mark Poling; John Trofatter and Ifetayo Venner. Three WEF employees were recognized and honored during the Empowering Women in Industry Gala: Morgan Brown, WEF’s Technical Programs Manager, was named Industry Advocate of the Year and was a nominee for Emerging Leader of the Year; Lisa McFadden, WEF’s Director of Integrated Technical Programs and Associate Director of WEF’s Water and Science Engineering Center, was nominated for Industry Advocacy, Mentor of the Year and Leadership in STEM and Brianne Nakamura, Senior Manager in WEF’s Water Science and Engineering Center, was nominated for Industry Advocacy and Emerging Leader of the Year.