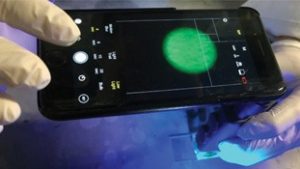 News of a new virus detection method has ‘gone viral’ so to speak. Researchers from the University of Arizona have developed a way to use a smartphone to monitor water supplies for the elusive norovirus, the causative agent of numerous food and waterborne outbreaks. The new monitoring tool provides water quality data in seconds and is more cost-effective than current methodologies.

Norovirus health burden
Often referred to as the stomach flu, norovirus is one of the most common causes of food and waterborne disease outbreaks in the US, responsible for up to 21 million illness cases, 71,000 hospitalizations and 800 deaths annually. All ages and socioeconomic status groups are susceptible to the disease but the most severe health outcomes occur among children and the elderly.1 Experts estimate that one in six children will receive medical care for a norovirus infection before reaching the age of five and that half of the US population will receive medical care for norovirus symptoms at some point in their lifetime.

Globally, the disease burden of norovirus is estimated at 685 million cases, earning the pathogen status as the second most common cause of acute gastroenteritis in the world (rotavirus is number one). Every year, about 200,000 deaths, including more than 70,000 child deaths in the developing world, occur from norovirus infection, resulting in an estimated cost to society of $60 billion.2

There are at least 32 norovirus genotypes able to infect humans. Due to incomplete or temporary immunity and the variety of strains in circulation, individuals can be infected by noroviruses multiple times over the course of their lifetime. New strains consistently emerge, leading to a surge in norovirus outbreaks worldwide. Development of a vaccine has been complicated by the need to target multiple strains and also the fact that norovirus is extremely difficult to culture in the laboratory.

Norovirus spreads rapidly among populations, is highly contagious and has a very low infectious dose. Infected individuals can shed billions of norovirus particles but as few as 10 particles can cause disease in exposed persons. The most common symptoms include diarrhea, vomiting, stomach pain and nausea but fever, headache and body aches can also occur. Illness typically sets in within 12-48 hours following exposure and lasts an average of one to three days. In a small percentage of people, long-term health consequences, such as irritable bowel syndrome (IBS), also persist. Notoriously, the absence of norovirus illness does not necessarily mean the lack of norovirus infection. Infected persons may continue to spread the disease for two or more weeks after symptoms have resolved. In addition, some individuals have asymptomatic infections, i.e., never become ill but can still infect others.

Drinking-water contamination
Contamination of drinking water with norovirus occurs due to intrusion of human waste via septic tanks, wastewater distribution leaks, stormwater runoff, sewage overflows or other improper waste disposal practices. Improperly treated water is another source of outbreaks. Private drinking-water wells have the additional concern of shallow designs that are more susceptible to contamination and the likelihood that they are not monitored as frequently a municipal supplies under regulatory oversight.

The latest waterborne disease and outbreak surveillance system report from the CDC was published in 2017 and noted two norovirus outbreaks in the US, in 2013-2014.3 Numerous researchers have shown noroviruses susceptibility to typical drinking-water treatment doses of free chlorine but slightly more resistance than other bacterial or viral pathogens. One study, however, tracked the persistence of norovirus genomes in wastewater-contaminated drinking water sources in Finland and found that sand-filtration systems were 2-3 log10 less efficient at removing noroviruses, compared to bacterial hazards. Another groundwater site proved difficult to purge of norovirus genomes following chlorine treatment of the well and distribution network, where the virus remained detectable for over 108 days.

Improved monitoring with a Smartphone app
Currently, municipalities are not required to routinely monitor for norovirus. Those that do often utilize a molecular monitoring approach, which typically requires collection of water samples in the field, transport to the laboratory and several hours of analysis before a final result is obtained. Sampling and molecular analysis equipment can cost tens of thousands of dollars. Monitoring private wells is even more complicated. Private well owners are advised to consult their state certification officer to identify local laboratories with norovirus testing capabilities and test their wells at least annually. Such infrequent monitoring and the time needed to arrange for and complete testing could result in missing possible contamination events.

Rapid methods are needed that are also highly specific and sensitive (i.e., able to detect norovirus concentrations down to a single particle). For more than three years, my laboratory at the University of Arizona’s Zuckerman College of Public Health, in collaboration with Dr. Jeong-Yeol Yoon from the U of A’s Department of Biomedical engineering and Dr. Soo Chung, a recent PhD graduate from Yoon’s Biosensor’s lab, have been developing a smartphone-based device for detection of norovirus in drinking-water supplies. Support for the project was provided by Tucson Water and the National Science Foundation Water and Environmental Technology Center at the University of Arizona.

Our goal was to develop a simple, portable, low-cost, effective, real-time monitoring tool that anyone could use. The solution was to utilize a smartphone enhanced with an attached microscope designed to scan photographed images of water samples applied to a paper chip.4 Using a custom app, images can be analyzed to determine how many norovirus particles are present. The best part is that the phone and app do all the work. Results are reported automatically and you don’t have to be an expert to use the device. After an initial investment of about $50 for the smartphone microscope attachment, individual sample analysis costs a couple of dollars or less and can be completed in less than 30 seconds each.

Recently, NPR news, Forbes and numerous other media outlets highlighted the new smartphone norovirus technology, stating it’s potential usefulness in monitoring water quality, food safety and even cruise-ship hygiene.5,6,7,8 Efforts are currently underway to transfer the smartphone water quality monitoring tool from the laboratory to the real world via internal field trials. Later this year, field trials will be extended to Tucson Water employees who will test the method’s ease of use, specificity and sensitivity on a wide range of water supplies.

About the author
Dr. Kelly A. Reynolds is a University of Arizona Professor at the College of Public Health; Chair of Community, Environment and Policy; Program Director of Environmental Health Sciences and Director of Environment, Exposure Science and Risk Assessment Center (ESRAC). She holds a Master of Science Degree in public health (MSPH) from the University of South Florida and a doctorate in microbiology from the University of Arizona. Reynolds is WC&P’s Public Health Editor and a former member of the Technical Review Committee. She can be reached via email at [email protected]