PFAS, which as many of us have learned is short for per- and polyfluoroalkyl substances, continues to be a major topic in the news media and in industry discussions. PFAS compounds are man-made chemicals that are highly persistent and slow to degrade in the environment. They are considered to be emerging contaminants by US EPA. The two most common of them are perfluorooctanoic acid (PFOA) and perfluorooctane sulfonate (PFOS). There are actually thousands of PFAS chemicals, however, that have been created and are being detected in the environment.

PFAS has historically been used in the manufacturing of fluoropolymers. These chemicals have a unique ability to withstand water and grease, as well as high temperatures. These properties make them especially useful for certain applications, including paper and cardboard food packaging, insecticides, electronics, stain repellants, paints, plumbing tape, firefighting foam and non-stick cookware coatings.

Production of PFOA and PFOS was phased out in the early 2000s, by which time large quantities of these chemicals had been released into environments surrounding the locations where they were manufactured. PFOA and PFOS were added to US EPA’s Unregulated Contaminant Monitoring Rule 3 (UCMR3), which was promulgated in 2012. Monitoring activity conducted under UCMR3 has revealed detectable levels of PFOA and PFOS in drinking water supplies across the country. Other PFAS compounds, however, continue to be manufactured and used, with some coming under scrutiny for possible health effects, as well. 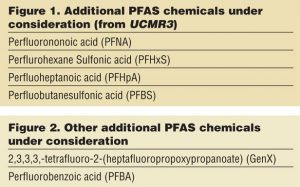 In addition, at the May 2019 meeting of the NSF Joint Committee on Drinking Water Treatment Units, the Joint Committee unanimously approved a motion to expand the scope of the DWTU Task Group on PFAS to consider removal of other PFAS contaminants under NSF/ANSI 53 and to NSF/ANSI 58. This group has developed an agenda to help guide them forward. The group is considering requirements for six additional PFAS chemicals, including four that are in UCMR3 along with PFOA and PFOS, plus two more PFAS chemicals. All of these chemicals are under consideration by various states for setting regulatory levels in drinking water. See Figures 1 and 2 for the identifications of these six PFAS chemicals.

While technology-specific test protocols are generally established under NSF/ANSI 53 and to NSF/ANSI 58, the real questions being considered with respect to the PFAS chemicals are how much of them to require in the challenge water and what level should constitute the maximum allowable product-water concentration. Generally, the approach regarding challenge-water concentrations is to review occurrence data of the chemical in drinking water and establish the challenge concentration at the 95th percentile of occurrence, such that 95 percent of people who have that chemical present in their drinking water will have it at the challenge concentration or lower. In cases where the occurrence data suggests a low challenge level, it is typically set at three times the regulated level.

In the case of PFAS, part of the complication of developing standard requirements is that right now other than PFOA and PFOS, there aren’t any US national regulatory levels for any of the chemicals. As mentioned previously, several states are considering their own regulatory levels, but these may conflict with each other. This lack of regulatory levels will be a major consideration for the task group, both in terms of setting the maximum allowable product-water concentrations, but also potentially in terms of setting the challenge levels. In addition to considering potential tests for reduction of these additional PFAS chemicals, the task group is also examining the question of surrogate development.

Surrogates for chemical reduction
In terms of the NSF/ANSI DWTU Standards, a surrogate for chemical reduction is a specific chemical that is more difficult for a given technology to treat than a defined group of related chemicals. For example, NSF/ANSI 53 includes requirements for testing reduction of chloroform in drinking water as a surrogate for 51 other organic compounds, when the water is treated with activated carbon. Chloroform is difficult to separate from water using activated carbon, so chloroform was considered as a surrogate chemical by the joint committee. After initial consideration and evaluation, extensive research studies were conducted over a period of several years back in the 1990s, comparing reduction of chloroform by several different activated carbon technologies to reduction of each of the compounds in the surrogate list.

At this time, it is unknown whether one of the PFAS chemicals could potentially serve as a surrogate chemical for determining effectiveness of reduction of other PFAS chemicals. This question will be examined by the task group using a variety of approaches, potentially including a comparison of chemical structure and properties (length of carbon chain, molecular weight, solubility in water, etc.), a review of published literature regarding studies of treatment of PFAS chemicals in water, etc. If the initial examination appears to suggest a potential surrogate chemical, the task group may then possibly consider beginning research studies similar to those used to develop the chloroform VOC surrogate in NSF/ANSI 53.

In any case, even if the initiative to develop a PFAS surrogate chemical is successful, it will likely require several years of effort and some considerable funding to see it through to completion. In the more near team, it seems likely that the task group may first develop reduction requirements for the individual PFAS chemicals being considered.

Ongoing work
The field of drinking water and drinking water treatment research is one that evolves quickly and continuously. New information is being presented at conferences, in publications and through interactions of scientific groups. This new information is very important to the NSF Joint Committee on Drinking Water Treatment Units. The joint committee uses this information to continually consider updates, improvements, expansions and other changes to the standards on an ongoing basis. PFAS is an emerging group of chemical contaminants in drinking water that is a key focus not only for consumers and for the water treatment industry, but also for the joint committee. Look for continuing updates regarding the joint committee’s activities in future columns.