From Exposure to Illness: What Happens If You Drink Contaminated Water?

Outcomes following exposure to waterborne contaminants range from absolutely nothing to rapid death. Diarrhea is the most commonly recognized outcome related to contaminated drinking water but for some, more serious health problems may occur, such as kidney failure or chronic health effects, including heart disease, arthritis or diabetes. Certain populations are more vulnerable than others to waterborne diseases, including immunocompromised persons, the young (especially those under the age of five) and the elderly (generally over the age of 65). The true impact of illnesses spread via the drinking water route is difficult to quantify, given continual under-reporting and similar symptomology to other infection routes or illnesses, such as food poisoning, colds or flu.

Waterborne disease tracking and reporting
Tracking causative agents of waterborne disease is complicated by a number of factors. One factor is that requirements for reporting diseases in the US are mandated at the state level. In the early 90s, the Council of State and Territorial Epidemiologists (CSTE) collaborated with the Centers for Disease Control and Prevention (CDC) to provide a uniform criteria for defining disease for public health surveillance. The CDC’s national outbreak reporting system, or NORS, is a web-based tool for health departments to report waterborne outbreaks. Only a handful of waterborne diseases, however, were selected as nationally notifiable illnesses and are recorded in the database (Table 1). 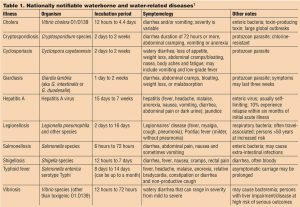 Reportable waterborne illnesses may have short incubation periods (i.e., several hours) or it may take weeks for symptoms to manifest. Many infections are asymptomatic; however, the infected individual can still shed organisms in their stool and transmit the disease to others. Carriage rates range from days to months post-infection.

Often infections are self-limiting and mild but others can be serious or fatal. For example, cholera infection caused by toxin-producing bacteria Vibrio cholerae O1 or O139 produces highly variable symptoms, marked by diarrhea and/or vomiting. Due to similar symptomology to other pathogens, isolation of the organism from biological samples or detection of antibodies in host sera is required criteria for laboratory diagnosis. Other strains of Vibrio bacteria are not classified as cases of cholera. While only confirmed cases are listed in the National Notifiable Diseases Surveillance System, worldwide approximately three to five million cases of cholera occur resulting in about 120,000 deaths per year.

In 1993, Cryptosporidium was responsible for the largest documented US waterborne disease outbreak since formal surveillance and reporting began. Chlorine-resistant and commonly carried and shed in cattle feces, agricultural regions and storm water runoff are key variables for increased exposure risks. With incubation periods ranging up to two weeks, linking symptoms to sources may be difficult. Illness duration for cryptosporidiosis may last for up to four weeks and even longer for giardiasis or hepatitis. 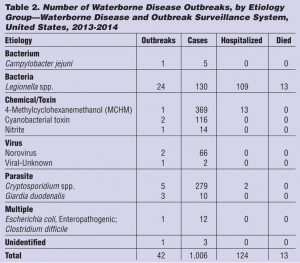 Recently documented events
Approximately every two years, the CDC publishes a summary of US waterborne disease outbreak data. Table 2 lists the number of outbreaks by causative agent from the most recent surveillance period, 2013-2014.2 During these two years, 42 outbreaks resulting in over a thousand illness cases, 124 hospitalizations and 13 deaths were documented. The vast majority (57 percent) of outbreaks were due to Legionella. The greatest number of cases, however, were due to a chemical spill in West Virginia where MCHM (4-Methylcyclohexanemethanol) contaminated the drinking-water supply causing reported skin irritation and stomach upset.

Experts estimate many more illness cases occur in the US than are reported, possibly ranging over 19 million per year.3 Another common waterborne contaminant is norovirus, a highly contagious organism, easily spread by infected humans, with a short incubation period of 15 to 50 hours. The onset of symptoms, which includes nausea, vomiting, abdominal cramping, diarrhea, fever, myalgia and headache, is typically rapid with the illness, lasting anywhere from four to 70 hours. Similarly, rotavirus is a common cause of enteric infections resulting in watery diarrhea, vomiting and fever, but typically in children between the ages of six months to two years.

Escherichia coli is commonly found in the intestines and feces of healthy people and animals. Some strains, however, can cause serious illness. Enteropathogenic (EPEC) E. coli is thought to be the main cause of persistent diarrhea and a leading cause of death, worldwide. Enterotoxigenic (ETEC), is an additional type causing an estimated 80,000 infections per year in the US. About five to 10 percent of people infected with Shiga toxin-producing strains of E. coli develop hemolytic uremic syndrome (HUS) after about seven days of illness. HUS patients are often hospitalized, as kidney failure is possible as well as permanent organ damage or death.

Conclusions
Broad-spectrum POU devices provide effective final barriers for reducing exposures to waterborne, disease-causing contaminants. While exposure to some microbial contaminants may result in asymptomatic infection, mild illness or even inferred immunity (i.e., Salmonella and rotavirus), those exposures also invariably lead to the risk of infection, illness and death.