Most professionals in the water treatment industry are familiar with the concept of softening capacity for water softeners. Many have seen or heard terms such as 30,000-grain or 40,000-grain softener and those who are familiar with these terms generally know (or surmise) that a 40,000-grain softener is bigger than a 30,000-grain softener. But many probably don’t know the details behind how a softener is established to be rated at these capacities. Softening capacity is actually established through a standardized laboratory test that is described in great detail in NSF/ANSI 44 Residential Cation Exchange Water Softeners.

Capacity versus salt setting
As many of us already know, salt is used to regenerate cation exchange resin. It would make sense, then, that if only a little salt is used for regeneration, then the softener won’t have as much resulting softening capacity compared to if a lot of salt were being used for regeneration. It would also make sense, however, that there are limits on how much capacity can be gained by adding more and more salt. At some point, when adding more salt, the amount of additional salt isn’t useful for regeneration and simply ends up flushed out of the softener during rinsing (or maybe even ends up in the softened drinking water).

There is actually a theoretical maximum amount of salt and amount of resulting capacity that can be used for regenerating cation exchange resin. It is based on the chemical structure of the cation exchange resin, as well as the atomic and molecular weights of the salt and the hardness. Beyond the theoretical maximum, more salt is useless. In practice, various factors cause softeners to operate less efficiently than at the theoretical maximum. This is why measurements of softening capacity must be performed to find out how efficiently the specific softener operates at the conditions being tested. In general, the more salt that is added, the more softening capacity is achieved, although the additional capacity per the additional amount of salt decreases and eventually becomes zero, as more and more salt is added. So, softener capacities are specific to associated salt settings. 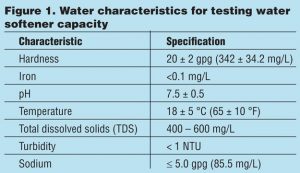 The test
To make sure the test results are repeatable and reproducible, the hard water used for testing softener capacity is defined quite precisely, per Figure 1. Changing the characteristics of the water could affect the softening capacity and could make the test less repeatable and/or reproducible. For example, if the test water contained more iron, it could foul the cation exchange resin and affect the test results. Also, the cation exchange resin must be conditioned to a specific state of regeneration prior to testing softening capacity. So, the test requires that the softener be operated using the test water per Figure 1 at a flowrate of four gpm per cubic foot of cation exchange resin until the softened water has 10 grains per gallon of hardness in it. The softener is then regenerated at the salt setting being tested for capacity and is ready for testing.

For example, if the softener reached 1,600 gallons with test water that contained 20 grains per gallon hardness, the total amount of hardness introduced to the softener during the test would be: