As man’s most valuable resource, water and the ability to have it, use it and control it has been ongoing for centuries. And now, with growing populations and climate changes worldwide, water scarcity is worse than ever before on a global scale. 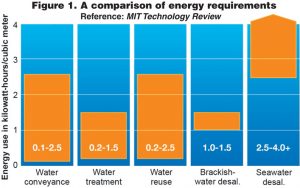 Desalination as a rescue option
Case in point: Day Zero for Cape town, South Africa was April 16. On that day, the city would run out of water; the taps would be dry. This was due to a severe drought that began in 2015. During the months leading up to that day, portable desalination containers were being actively procured to provide quick relief by utilizing sea water inlets. These and a successful water-saving campaign averted Day Zero, but that date has only been pushed back to 2019, for now.

In other parts of the world, there are several large desalination projects utilizing RO. With a climate similar to California, there is Melbourne, Australia’s giant $4.9 billion ($3.5 billion USD) desalination project. From 2001 to 2009, the states of Western Australia, South Australia, New South Wales, Victoria and Queensland were mired in a nine-year drought. Melbourne started building a megascale desalination plant around 2005, which was finished in 2012. By then, however, the drought had significantly subsided, so the plant was put in standby mode until 2017.

Another giant desalination plant is Israel’s Sorek Plant. Being inherently a very dry region, Israel in 2007 started a large-scale water conservation and recycling campaign. While this helped stem a catastrophe resulting from a drought lasting from 2000 to 2010, Israel still needed more fresh water—about 1.9 billion cubic meters. Natural sources were yielding about 1.4 billion cubic meters per year. The Sea of Galilee was quickly draining, which meant farms and agriculture were going to go under. Three large desalination plants were installed, beginning with the Ashkelon plant in 2005, the Hadera plant in 2009 and the Sorek plant, commissioned in 2013 at a cost of $500 million (USD). (They can now sell fresh water profitably for $0.58 per cubic meter [1,000 liters] or about $715 per acre-foot. An acre-foot is basically the amount of water that covers an acre up to a depth of one foot. The farms are succeeding amazingly well and the Sea of Galilee is filling up again.)

Singapore’s third desalination plant, added in 2018, is another high-dollar solution, at a cost of $217 million. That country now meets 30 percent of its water needs through desalination. Another two plants are expected to go online in 2020. Improved technology includes utilizing solar panels in the roof of the new plant and superior membranes for the purification stage, making them more durable. The US ranks number four in the world of countries using desalination plants, while the biggest market is the Middle East.

But are they globally feasible?
There’s no doubt that these large desal plants are proven to work. They also reduce the need to dip into the earth’s limited fresh water supply. Our oceans are vast and running out of sea water is not likely to happen. These megaplants, however, need a tremendous amount of energy to produce this water (see Figure 1) and they are expensive to build (eliminating many communities and countries from the customer base). And, they take years to build.

Another viable solution to water scarcity is smaller, RO facilities that also use energy conservatively and are much less expensive. They are especially convenient and efficient for areas that are farther away from a water source, such as the ocean. In these regions, underground water could be accessed and cleaned up for consumption and other uses. The island of St. Croix is an example.

St. Croix had to confront imminent water scarcity in 2009 due to its existing desalination plant’s deteriorating condition. The solution was to utilize RO technology in mobile units, which handled the crisis admirably while the plant was being repaired. This solution was so cost effective, it allowed the Virgin Islands Water and Power Authority (WAPA) to refurbish additional facilities as well. Of note is that not only did these very efficient mobile units fulfill the immediate need of supplying water to St. Croix, they did so while maintaining the integrity of the environment, so important to the Virgin Islands. This is yet another reason why POU solutions have gained popularity: the speed at which desalination technology is progressing.

Price matters
Compare what Israeli municipalities pay for water from the Sorek plant with San Diego, California’s Carlsbad desalination plant, built in 2015 at a cost of $1 billion dollars. The cost per acre-foot of treated sea water is estimated at $2,000. However, as technology improves, a more economical solution may be utilizing smaller, portable POU installations. These would have the advantage of being installed rapidly, such as weeks instead of years. Using reinforced plastic casings, many of these systems can be prefabricated and shipped directly to the point-of-use locations. Additionally, as technology improves for desalination systems, smaller RO facilities can upgrade as needed.

This is a strong argument against billion-dollar programs. Why spend so much money on plants that will saddle populations with high water bills for years to come? As the MIT Technology Review reports: “Technologies like advanced membranes made of atom-thick sheets of carbon…hold the promise of further cutting the energy needs of desalination plants.” These membranes are the thinnest and strongest yet, covering a large surface area and providing superior water permeability and electrical conductivity. Such technologies, however, are still in the laboratory stage.

Yes, these smaller POU systems lack the economies of megascale plants. But, like personal computers or home-built solar panels, they respond better to local requirements and require far less infrastructure. Best of all, the small-scale systems can be upgraded as new technologies come along. It’s the best reason for small-scale desalination: future-proofing.

Conclusion
It’s clear that desalination is here to stay. Technology breakthroughs are addressing its main drawback: heavy energy use. Just like solar, desalination benefits from a wait-and-see-approach on megascale projects, giving the advantage to the micro-scale, point-based desalination systems.

About the author
Riggs Eckelberry is the President, CEO and Chairman of the board for OriginClear. As Co-founder, he brings his veteran technology management skills to the Blue Technology sector and most recently has launched WaterChain, OriginClear’s prospective Initial Coin Offering (ICO). As President and COO of CyberDefender Corporation from 2005 to 2006, Eckelberry was instrumental in building the company and its innovative product line, helping to achieve initial funding and a public company filing. From 2001 to mid-2005, he helped launch and turn around technology companies as Founder and President of TechTransform, a technology consulting firm. In 2004, Eckelberry was a key member of the team that commercialized YellowPages.com, resulting in its sale for $100 million to SBC/BellSouth. His career has encompassed many entrepreneurial enterprises, including the non-profit sector, as well as a mariner. Eckelberry holds an oceangoing master’s license (inactive). To learn more about water treatment solutions, please visit https://www.originclear.com/