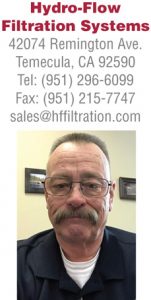 Chuck Lacy has been tinkering with water filters for more than 35 years, designing, improving and manufacturing them. “Back in the early 1980s, I worked as a service manager for a company called Profitime. They were a Sunkist distributor for institutional, packed fruit juices for restaurants, schools and hospitals. We installed the juice machines that mixed the concentrate with city water. Every installation required a water filter. At that time there weren’t too many choices for water filters. The ones we did use had problems with leaking and plugging, so I was asked by the owners to come up with something that worked better than the existing filters in the market place—and Hydro-Flow was born,” he said.

“More and more companies started asking for Hydro-Flow filters. Coca-Cola, Farmers Brothers, other big service places wanted it. I was working full-time at Profitime and in the evening, I was in the garage making water filters. After 14 years of that, I left Profitime to focus solely on Hydro-Flow. What happened was the demand kept going up. My first factory was 1,000 square feet. When I sold Hydro-Flow in 1996 (to WICOR Industries’ Sta-Rite, which was then acquired by Pentair Water in 2004), we had 114,000 square feet and more than 200 employees. I stayed with the company until 1999. Then I retired…I thought.

“I took about a decade off. But you just kinda get bored after awhile and you can only paint the house so many times. I’d been working since I was 14 years old and it’s real hard to turn that switch off.” In 2010, Lacy learned that the Hydro-Flow name was available again and he was back in business. Today, Hydro-Flow Filtration Systems in Temecula, CA, specializes in carbon-block technology and has grown to about 40,000 square feet of research and manufacturing space and 50 employees.

“A major challenge for Hydro-Flow from the beginning was finding the right equipment to use in making standard and specialty carbon blocks,” he said. “We have had to design much of the equipment that is used today at Hydro-Flow to get to a superior block quality and to gain certifications from NSF, IAPMO and WQA for both our specialty refrigerator filtration market as well as the drop-in blocks market. In 2017 we started selling standard carbon-block drop-ins: 2.5 x 5-inch, 10-inch and 20-inch (63.5 x 127.0-mm, 254-mm and 508-mm), as well as 4.5- inch (114.3-mm) diameter units. Most of our blocks go into custom housing. We support a lot of OEM.”

More demand for filters made in America
“We are currently one of four carbon-block manufacturers in the United States. Most carbon-block companies left the US for less expensive labor in India, Taiwan, Korea and China. Last year Hydro-Flow produced 1.6 million carbon blocks and this year we project two million. We’re probably not the biggest but we’re at least number four.”

Recently the demand has shifted back to the US. “We have seen a big change. Most of my customers get a better price overseas but want a US-made product. They are looking toward having everything 100-percent US-made. We’re getting back a lot of that business. Even some of the Chinese insist on US product for quality. They know their products aren’t there yet. They’re buying US-made product and importing it into China. The middle class is just growing there. They’re able to afford apartments in the city and the demand for US-made product in China will continue to grow.

“The carbon we’re purchasing is primarily from Sri Lanka—that’s where the coconut trees are. We do use some coal-based carbon but I would say that 95 percent is from coconut shell. The story I heard was that back in ancient times in India, they would char coconut shells and throw them into the wells to improve the taste of the water. That was the first filtration that came about. Nowadays it’s a little more sophisticated. We char it, size it, crush it. Some are treated with different types of gases to make catalytic carbons. The biggest advantage of activated carbon is its broad-spectrum capacity to adsorb organic chemicals and promote catalytic/chemical reduction of chlorine disinfectants, both of which contribute to bad taste in potable water.”
The humanitarian side of things

Hydro-Flow actively supports the rights of all humanity to have access to clean, fresh drinking water. The company’s motto is: ‘Delivering Mother Nature’s water the way Mother Nature intended it.’ A portion of the sale of every Hydro-Flow carbon block is donated to the Wishing Well International Foundation (WWIF). This non-profit sources clean, safe drinking water to nearly 25,000 people a year, all over the world, including Ghana, Kenya, Swaziland, South Africa, Haiti, the Dominican Republic and Japan. Since it was launched in 2010, WWIF has been a member of WQA. The goal was to unite WQA and its membership behind the cause for clean water. Kurt Peterson, WC&P International Publisher, joined early on and was instrumental in spreading the WWIF message throughout the water industry and beyond. The WQA endorsed WWIF in 2014.

Lacy said: “One thing I really like about the WWIF is that 100 percent of the funds collected go to the charity side, not the management side. By purchasing any of our Hydro-Flow products, our clients and their customers are supporting Wishing Well. We like to get everybody involved. It’s a good organization.” Hydro-Flow established its own Friends of Wishing Well International Foundation program to encourage donations and was the official sponsor of WWIF’s 6th Annual Golf Tournament in Denver, CO in March. Hydro-Flow is one of just three WWIF corporate sponsors at the Legacy level, which means the company has contributed $50,000, positively impacting 5,000 people around the world.

Constantly looking for solutions
“We’re working on some products that have special microbiologic properties, which suppress things like cysts and microbiological materials. There are different types of mixes for removal of chloramine versus heavy metals removal. We’re constantly in the lab looking at different ways of doing that. We now do more that is targeted toward specific types of problems. In the old days, it was taste and odor and chlorine. Nowadays there are so many things in water. There are a lot of problems. Yet everyone wants a water filter that does everything, a filter that will work in every refrigerator no matter what the water condition. So year after year, we continue to work on different types of formulas.”

Lacy, who is self-taught, has no plans to retire again anytime soon. “Our vision for the company is simple: new technologies should help grow the business and the industry. A better understanding of the world’s water problems at hand is very important. Our engineers work hard every day to combine new technologies with current product media to deliver a unique user experience. We have a couple more years of hard work to get to where we want to be.”