A recent newspaper article told of a water treatment dealer who hired a website developer to create content for a new company website. While constructing a testimonials page, the developer posted a sample testimonial borrowed from a site he had created for another client. When his fake testimonial was discovered by a visitor to the dealer’s website, it resulted not only in embarrassment but also some loss of credibility for the dealer. Lesson learned: Avoid fake testimonials on your website!

A poor online reputation can wreak havoc on your company sales and employee morale. New research finds that it can also damage coverage chances with many reporters. Savvy companies monitor how the business is portrayed online because they know even one negative media mention can quickly damage the public’s perception of their company.

Online media experts say if potential customers find anything negative, that could end up being a significant number of leads the business won’t get from people who are put off from using the service. On the other hand, including a minor customer complaint, along with a preponderance of positive comments, can add credibility to a dealer’s testimonials section. Social media can also affect a company reputation because it gives consumers free-rein to share their opinions and experiences quickly and frequently. In fact, 46 percent of businesses look to social media most often to monitor their online reputation.

Are fake testimonials always a bad idea for companies?
Believe it or not, some companies have seen value in creating their own testimonials because it gets the ball rolling. Sometimes startup businesses need that extra push to get started, and testimonials are a great way to make that happen. This then begs the question: “As long as fake testimonials stop after one or two, is it okay to give yourself this head start?” Most would say it is unethical and I would have to agree. There are other ways to start building up your business’ review reputation without creating fake testimonials, such as incentivizing writing reviews, streamlining the review process through an email or simply by offering outstanding goods and services that inspire customers to give positive feedback. Encouraging customers to talk about their experiences just gives the extra nudge they need.

We all know that companies would prefer to have only good reviews and that company performance is largely motivated by obtaining such feedback because it helps businesses thrive. Reviews play an important role, as Review/Trackers.com reports 85 percent of consumers read them to determine whether or not local businesses are good. Many people, however, don’t realize just how many fake reviews really exist, posted everywhere from company websites to Google reviews and social media. In response to the demand for positive reviews, some companies have actually taken to paying for them and even more have cashed in on the need by creating review mills. Reviews and testimonials are supposed to help someone make a decision about a company, but it can be tough to trust in these reviews, knowing how easy it is for a company to add fake reviews. This leads many to wonder: “Is the testimonial I’m reading even real?” 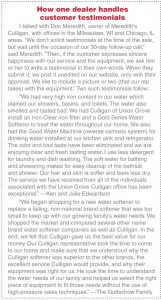 Are paid and fake reviews legal?
The Federal Trade Commission (FTC) is the government’s consumer watchdog. In short, the FTC’s mission is to rid the marketplace of “unfair and deceptive marketing” and it has the authority to both fine and shut down operations. According to FTC, online endorsements and testimonials can’t be purposely misleading, plus any relationship or connection between a company and reviewer must be disclosed. Additionally, paid reviewers and endorsers can’t publish fake or unfounded claims. In the simplest terms, posting fake testimonials online is against the law. An individual cannot be paid to post a review (even if it is the truth) unless the paid endorsement is clearly stated and understood. Reviews must be based on authentic, real-life experiences.

Can prospects and journalists find you on Google?
A poll of more than 200 journalists nationwide from digital communications firm Lumentus, reveals more than 70 percent of respondents report a Google search is their first step in performing background research; only 44 percent said that they did not pursue a story or article based on online search results. This research confirms that a Google search is the ‘front door’ for every business with an Internet presence. So make sure that your dealership appears on the first page of Google under water treatment. You want to be found fast and easily on the number-one search engine.

Indeed, online search is now one of the most important tools journalists use when they begin to research a potential news story and what that search reveals about a brand or business can be a significant factor in whether they pursue it. According to Lumentus CEO Laurance Moskowitz, you need to manage your company’s search results “in an active and ongoing manner.” Other notable findings from the 2018 poll of journalists include:

On search:
•  More than 65 percent of journalists always perform an online search when researching a story.
— An additional 31 percent stated they often perform the online search for research.
— Fewer than two percent rarely or never perform online searches for research.
— Seventy-six percent of responding journalists said they always or often consider online search results when researching a subject for coverage.
— Fewer than four percent rarely or never consider online results when researching a subject for coverage.
•  More than 45 percent of respondents said they thoroughly examine all search results that appear relevant.
On reputation:
•  Thirty-five percent of journalists said a subject’s digital reputation is very important when they develop story ideas.
— An additional 42 percent stated that digital reputation was somewhat important.
— Only nine percent said online search results were not important.
•  More than 36 percent of journalists said they are less likely to move forward with a story subject if it has little to no online footprint.
On trust:
•  Seventy-four percent of the journalists surveyed said they trust other members of the media.
•  Nearly 94 percent said they consider potential biases in news coverage when using other outlets as sources for their own coverage.
•  About 44 percent said they distrust information they discover on Facebook.
•  More than 30 percent distrust information they find on personal websites.

“Creating and managing an online profile that reflects the image a company wants to project is critical in achieving the right first and most long-lasting impression,” said another Lumentus senior partner. “The online or digital image presented by any business is crucial for all audiences, from journalists writing about them to clients, employees and business prospects.”

Conclusion
Website testimonials are an important tool for establishing credibility for your products and services. Don’t risk your good reputation by posting fake testimonials.

About the author
David H. Martin is President of Lenzi Martin Marketing, Oak Park, IL, a firm specializing in water improvement and environmental marketing that integrates old and new media. He can be reached at (708) 848-8404 or by email at dmartin@lenzimartin.com