Introduction
Cooling-tower water systems are rich breeding grounds for all sorts of microorganisms that range from bacteria and fungi to algae. For plant personnel, this poses multiple challenges. On the one hand, there is the health concern for preventing outbreaks of Legionella, which can spread Legionnaire’s Disease. But, there also is the role microbials can play in causing corrosion and structural damage to cooling systems. In the second case, there are three roles microorganisms can play in harming cooling system performance. The first category is known as microbiologically influenced corrosion (MIC). The two related aspects are known as almost MIC (aMIC) and MIC supporters (MICs).

It is important to understand that cooling systems are home to planktonic and sessile microbials. Planktonic are free floating and rarely cause corrosion or other breakdowns in tower structures or equipment. The microorganisms associated with MIC, aMIC and MICs however, are sessile (fixed in one place) and will stick to surfaces and form biofilms on tower surfaces that create environments for corrosion and other damage. This article will examine MIC, aMIC and MICs, and will offer some practical ideas for diagnosing these problems and provide tools for the successful protection of cooling-water systems.

Cooling-tower operation
Cooling towers are critical to heating, ventilation, air conditioning (HVAC) systems. They reduce water temperature by evaporation. In the course of their operation, they become contaminated by dust particles that can (and often do) contain bacteria, fungi and algae spores. These airborne microbials join the various microorganisms that enter cooling towers through makeup water that can come from different sources, such as treated raw water or potable water.

What is MIC?
Most MIC-causing microbials do not consume metals. Instead, they create conditions that promote corrosion through biofilms on metal surfaces. These microorganisms can cause alkaline, acidic, reducing and/or oxidizing environments that cause corrosion to the metal in cooling systems. Here are some of the common classes of microorganisms in cooling water systems:

Fungi cause under-deposit corrosion, can destroy wooden construction and produce organic acids. Algae can float or attach themselves to the tower structures. One way they can promote corrosive environments is by forming deposits on cooling system structures. Bacteria may be found under algae growths, bacteria slime, fouling deposits and in cooling-basin sludge. Consequently, MIC can exist in different parts and environments within the same cooling-water system. MIC is mostly caused by bacteria but fungi and algae can also contribute to cooling-system equipment deterioration. MIC microorganisms that promote metal breakdown in cooling-tower water systems are normally of two types: sulfate-reducing bacteria and iron-reducing bacteria. The aMIC microbials (slime-forming bacteria, algae and fungi) can create conditions that may or may not cause corrosion.

Types of MIC
Briefly, we will examine the two most common forms of MIC bacteria. Sulfate-reducing bacteria convert sulfate ions to elemental sulfur and often to sulfides (hydrogen sulfide) that attack most metals. These bacteria are anaerobes that do not live in the presence of free oxygen. Iron-depositing bacteria change soluble iron ions (ferrous) to insoluble iron ions (ferric) that form by consuming the iron, resulting in faster carbon-steel corrosion. They also cause deposits and increased corrosion under the deposits. Table 1 highlights common MIC bacteria associated with corrosion.

These iron-depositing bacteria are often overlooked since standard microbiological tests do not identify them. The problem is that these MIC organisms (identified in Table 1) produce iron-oxide deposits with biomass and promote under-deposit corrosion. In low-carbon steel, MIC bacteria can cause pitting and shallow, localized corrosive attack. Conversely, in copper alloys, galvanized steel and aluminum alloys, these bacteria will promote pitting and general corrosion. Stainless steel can suffer severe localized corrosion from MIC, while titanium is not known to show corrosive damage from MIC. 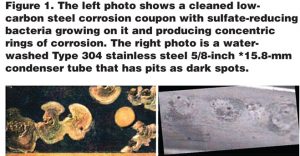 Corrosion examples
MIC on low-carbon steel often is visible after cleaning the surface. Concentric rings are also often present, as shown in the two photos in Figure 1. The concentric rings indicate the growth of a sulfide-producing (sulfate-reducing) bacteria colony. The original slime deposit has been washed away but still shows staining around the pits. This corrosion was also caused by sulfate-reducing bacteria. Another typical corrosion characteristic in stainless steel is the presence of a deep penetration of the metal, which can resemble tunneling, like termites do in wood.

Other examples
In copper alloys, MIC pitting can appear by sulfide-producing bacteria sites. Denitrifying or ammonia-producing bacteria may create localized corrosion, which is indicated by a blue/black area. MIC on aluminum alloys can be found as either localized pitting or general metal removal. If microorganisms are acid- or alkaline-producing, then a general metal or localized attack occurs. Sulfate-reducing bacteria or other anaerobic microbials attack the oxide protection film on aluminum and will cause localized and/or pitting corrosion, with whitish deposits. Corrosion on galvanized steel is like that found on aluminum alloys with whitish deposits. When the galvanized layer is gone, the low-carbon steel remains and will have black sulfide deposits. 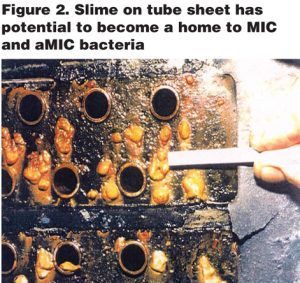 Almost MIC
Almost MIC contaminants are not always the source of cooling-system metal deterioration, but they can be if in direct contact with the metal surfaces. These kinds of microbials may produce alkali (ammonia) or acids (sulfuric, nitric and organics). Common examples would include nitrifying and denitrifying bacteria, as well as organic and inorganic acid-producing bacteria, if the cooling treatment is nitrite-based.

Nitrifying bacteria are often found in closed cooling-water systems or in cooling-tower water. They can create nitric acid, which will promote metal corrosion in low-pH water. However they also inhibit corrosion on stainless steel and will protect carbon steel in the nitrate form. Nitric acid will also attack copper and galvanized steel. Denitrifying bacteria can convert nitrates and nitrites into ammonia or even nitrogen. These have the opposite effect of nitrifiers. While ammonia is not corrosive to carbon steel, stainless steel or galvanized steel, it does attack copper alloys and aluminum.

Still other aMIC microorganisms are acid producers, such as Thiobaccillus, which converts sulfur to sulfuric acid. There are also bacteria that make organic acids (like glycolic acid) and can occur in glycol/water cooling systems. Some forms of aMIC bacteria can also create acetic acid, but they rarely promote cooling-system equipment deterioration unless found under biofilm deposits in contact with metal surfaces.

Almost MIC bacteria can impact a cooling tower’s wooden support structure, film fill and chiller tubes. They are aided by slime-forming bacteria that produce gelatinous deposits that are often called biofilms or biomass. These can be called aMIC because they create the conditions that promote MIC. The photo in Figure 2 shows slime on a tube sheet that has the potential to become a home to MIC and aMIC bacteria. Algae and slime can also build up on cooling-tower support structures and promote MIC and aMIC bacteria. 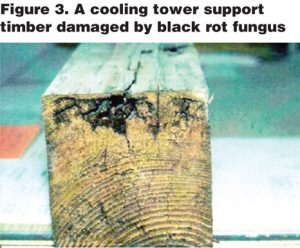 MIC supporters
Another problem cooling systems face is the damage of MICs. One micro-organism (fungi) can literally eat at cooling-tower structures, such as timber supports. This is shown in Figure 3, which is a picture of a 4 x 4-inch (101.6 x 101.6-mm) piece of Douglas fir damaged by a specific fungus. So, in addition to the danger of corrosion damage to metal cooling-tower structures and components, plant operators must be aware of the damage fungi may cause to wooden cooling tower structures.

Practical tips
We mentioned earlier the distinction between planktonic and sessile microbials. It is important to note that most testing methods primarily look for planktonic organisms. To successfully devise treatment programs, testing must focus on detection of sessile microbials in pits, crevices, welds and under other deposits. Here are some suggestions for improved monitoring programs:

Final takeaways
Here are some ideas plant operators may find useful for successful operation of their cooling-tower system:

About the author
Paul R. Puckorius is a principal in United Water Consultants and also is President of Puckorius & Associates, Inc. He has been working with cooling-water treatment program development in different industries for more than 42 years as an independent consultant. Puckorius has assisted many facilities in developing cost-effective microbiological programs for both Legionella and general bio-problems. He can be contacted at waterphd1@aol.com.