Many industry professionals are familiar with NSF/ANSI 42 and NSF/ANSI 53. These standards have been around for over 30 years and there are large numbers of products certified to them. Given the popularity of activated carbon (AC) filters, including carbon block technologies, it is not surprising that industry folks typically associate these two standards with activated carbon technologies.

In recent years, however, a number of additional standards covering AC technologies have been developed. Awareness of these standards is much lower than is the case with NSF/ANSI 42 and NSF/ANSI 53. An overview of these standards, what they cover and some background information will help increase this awareness. 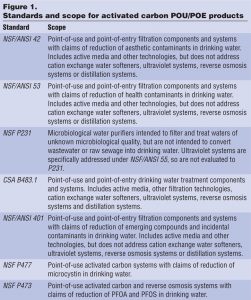 Newer standards
Over the last several years, there has been continued interest in developing additional standards for AC products to address a number of new and/or emerging contaminants, or additional requirements considered important in certain jurisdictions. Figure 1 provides an overview of these standards and their respective scopes. Background on each of these follows.

NSF P231 was developed by NSF in 2003 to provide a basis for certification of microbiological water purifiers. It directly incorporates the US EPA Guide Standard and Protocol for Testing Microbiological Water Purifiers. NSF P231 also adds requirements for material safety, structural integrity and product literature based on the NSF/ANSI DWTU Standards.

CSA B483.1 was developed by the Canadian Standards Association starting in 2005 and was published in 2007. This standard references the NSF/ANSI DWTU Standards and includes additional requirements typical of plumbing products standards, such as valve life tests, plumbing connection dimensional checks and more.

NSF P477 was developed by NSF in 2015 to address microcystin, in response to a significant algal bloom in Lake Erie that had a major impact on the public water supply in Toledo, OH in late 2014. It includes a test method for reduction of microcsytin, as well as requirements for material safety, structural integrity and product literature based on the NSF/ANSI DWTU Standards.

NSF P473 was developed by NSF in 2016 to address the emerging contaminants PFOA and PFOS based on increasing understanding of and focus on these contaminants. This standard includes a test method for reduction of PFOA and PFOS, as well as requirements for material safety, structural integrity and product literature based on the NSF/ANSI DWTU Standards. 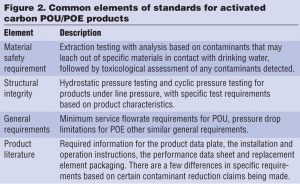 Differences
Just as the standards have a number of common elements, they also have differences. Some of them address technologies (such as RO) in addition to activated carbon products and some don’t. Some of them include both POU and POE products, whereas others are restricted to POU only. Some of them are actually protocols, as opposed to consensus standards, as well.

The future of NSF P477 and NSF P473
Because of the time-sensitive need for technically sound test methods to help increase consumer confidence in treatment products related to specific contaminant issues, these two standards were developed by NSF through a non-consensus, protocol-development process that was able to proceed very quickly. For the long term, it is important to have these protocols vetted and confirmed through the ANSI-accredited consensus standards process utilized by the NSF Joint Committee on Drinking Water Treatment Units. In fact, requirements for microcystin reduction based on NSF P477 have recently been added to NSF/ANSI 53 by the Joint Committee through the consensus process. With this work being completed, NSF will sunset NSF P477 in the near future.