In the 1980s, water supplies at one of the United States’ premiere military bases was found to be contaminated with (then unregulated) waste chemicals from industrial operations. Since that time, science has amassed strong evidence that at least some of these chemicals cause cancer in humans. Populations residing and working at Camp LeJeune between 1953 and 1987 were likely exposed to harmful levels of chemical carcinogens in the water supply. Uncertainties related to water contamination and adverse health effects have complicated reimbursements for medical costs and may have impacted the health of subsequent generations.

Veterans and families exposed
Camp LeJeune was established in 1942 as a Marine Corps military base in Jacksonville, NC. Historically, Camp Lejeune served as one of three boot-camp facilities for the Marines, in addition to the Parris Island, SC and San Diego, CA bases. (The base covers 244 square miles and incorporates the New River and 11 miles of beaches along the Atlantic Ocean.1 Today, the base incorporates several Marine Corps commands as well as one Navy command.)

Contamination of two of the eight water sources serving the base populations at Camp LeJeune was first reported in 1982. The contaminants were generally categorized as VOCs, which are organic chemicals that readily transition from the liquid to vapor phase. (They can, therefore, cause adverse health effects from both ingestion and inhalation routes of exposure.) Camp LeJuene’s drinking water was found to be contaminated with waste from a dry cleaning business located off-base. The business was dumping large amounts of PCEs (perchloroethylene or tetrachloroethylene), resulting in concentrations in excess of the US EPA maximum contaminant level (MCL), currently set at five ppb.

Another drinking-water source at Camp LeJeune was found to be contaminated with TCE (trichloroethylene), as well as PCE, benzene and other harmful chemicals that leaked from on-base, underground waste storage tanks and industrial spills. (TCE is commonly used as a solvent to clean metal parts, while PCE is used primarily for dry cleaning and metal degreasing.) These VOCs were not regulated under the US EPA Safe Drinking Water Act until after 1987.

Necessary to evaluate risks associated with carcinogen exposures is an understanding of the duration, frequency and level to which people contacted the hazard. Determining that information retrospectively was a significant challenge in this case but critical to assessing how benefits to veterans and their families should be distributed.

Health effects
Just as VOCs evaporate quickly in the environment, they are also readily excreted from the body. Thus, there are no medical tests that can be done to determine exposures dating back more than a few days or weeks. Even short-term exposures to carcinogens, however, can cause cancer over the course of years.

In order to build an exposure assessment for Camp LeJeune residents, the Centers for Disease Control and Prevention’s (CDC) Agency for Toxic Substances and Disease Registry (ATSDR) reconstructed probable historic contaminant concentrations using simulation-modeling approaches.2 Based on these models and other data, TCE maximum concentrations in 1982 were determined to be 1,400 ppb, while the maximum level of PCE detected was in 1985 at 215 ppb, compared to the current US EPA MCL of five ppb for both contaminants. Further, the ATSDR estimates that levels remained above the MCL for 30 years.

Based on current scientific information, this level of exposure warranted acknowledgment that the base populations were at increased risk for at least eight diseases, including adult leukemia, aplastic anemia and other myelodysplastic syndromes, bladder cancer, kidney cancer, liver cancer, multiple myeloma, non-Hodgkin’s lymphoma and Parkinson’s disease. Although this list comprises diseases for which there is sufficient scientific evidence linking exposure to illness, there may be other less well-known health outcomes from VOCs. 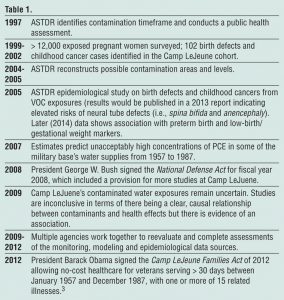 A long battle
Since 1989, when Camp LeJeune was listed as a Superfund site and placed on the National Priorities list, researchers have been evaluating the related risks. Years have passed while cases of morbidity and mortality in the exposed population raised suspicion and victims wait for reimbursement of medical burdens. Table 1 shows a timeline of major events.

While the 2012 law provided free medical care for affected veterans and their families, it did not cover VA disability benefits. Additional epidemiological studies were published in April 2018 and included health surveys from over 76,000 respondents (or their close relatives) connected to Camp LeJeune during the exposure period. This study found that those who drank the contaminated water had an increased risk for bladder and kidney cancer, as well as overall kidney disease. This risk increased with increasing levels of exposure in both Marines and civilians.4

Even before this data was formally published, the Department of Veteran’s Affairs amended their benefits regulation to include certain diseases associated with the Camp LeJeune water problem and also to provide provision for associated family members. This rule extends the exposure period from August 1953 to December 1987 and allows for coverage of medical care received after December 2014 for anyone exposed for >30 days (consecutive or non-consecutive). The rule is expected to include about 900,000 persons and cost more than $2 billion over the next five years.5

Minimizing future uncertainties
The Camp LeJeune case study is an example of extensive and innovative research but also the complexities in identifying waterborne contaminant risks and the lengthy investment in time and resources to draw strong evidence of health outcomes. In this case, persons exposed for only 30 days are considered significantly impacted. This outbreak predates when US EPA started regulating VOCs in 1987 or when ATSDR started assessing health effects due to VOC exposures in drinking water in 1993. (Most studies on VOC exposures have been conducted in animal populations, resulting in significant uncertainties relative to human effects, especially in future generations indirectly exposed.) Many VOCs are removed from drinking water using granulated activated carbon. Simple POU treatments can reduce the uncertainties of future unregulated contaminant impacts on human health.