US EPA ranks drinking-water pollution as one of the top environmental threats to health. Credible estimates suggest that only half of waterborne disease outbreaks in community water systems (and about one-third of those in non-community systems) are ever detected, investigated or even reported. Microbes in tap water may actually be responsible for as many as 30 percent of gastrointestinal illness in the United States. Recent studies indicate that there is a far greater waterborne transmission pathway for viral activity than previously believed.

Waterborne microorganisms range in size from extremely small viruses in the sub-micron range to relatively large cysts that can approach 50 microns in diameter. Pathogenic microorganisms can occur naturally in lakes, streams, reservoirs and most surface-water sources. Even groundwater supplies are not immune, since the existence of subterranean bacteria has been definitively been proven, along with the ability of enteric viruses and other organisms to leach into groundwater from the land application or burial of sewage sludge and other residential and industrial wastes.

One hundred fifty years ago, much of the US water supply was teeming with various forms of aquatic organisms including coliforms, bacteria, viruses and protozoa. Waterborne diseases, such as cholera, typhoid and dysentery, were a serious public health problem; they are still major concerns in third-world nations, where over a billion people lack clean drinking water and almost two billion lack adequate sewage distribution and processing systems.

America’s water treatment and delivery infrastructure is aging and outdated, though central-plant operators are doing the very best they can, within the confines of limited budgets, outdated equipment and (sometimes) unreasonable regulations. Considering the catastrophic water quality failure events that are so frequently highlighted in recent news, more and more Americans are realizing that they need to take responsibility upon themselves to improve the taste, odor, appearance and even the safety of centrally supplied water. This makes sense, since such a small amount of municipal water is consumed by humans. It is prohibitively expensive to address every single potential contaminant or waterborne threat comprehensively at the city level.

There are nearly 250,000 public water-supply systems in the United States, serving everything from the smallest towns to major metropolitan areas. Approximately 90 percent of the US population currently receives their water through community water systems, with everyone else using private wells or other individually controlled supplies. Chlorine and chloramine are currently used by over 98 percent of all US water utilities that disinfect their drinking water.

The typical municipal water-treatment process involves a series of different steps. Some of the major steps include flocculation and coagulation, sedimentation, filtration and disinfection. Chlorination is often performed at several stages of the treatment process. On surface water supplies, chlorination may be performed in the initial stages to combat algae and other aquatic life that will interfere with treatment equipment and subsequent stages in the process. The chlorination stage that we’re particularly interested in occurs as the final treatment step after the completion of the other major cleaning processes, where the concentration and residual content of the chlorine can be closely monitored. Chlorine remains in the water as it is distributed to homes and businesses, thereby retaining some of its ability to continue killing.

Chlorination can deactivate microorganisms through a variety of mechanisms, such as damage to cellular membranes, inhibition of enzymes, destruction of nucleic acids and various other currently unknown/undocumented mechanisms. The effectiveness of the chlorination process depends upon a variety of factors, including chlorine concentration, contact time, water temperature, pH value and level of turbidity. Chlorination is undoubtedly the cheapest, most effective way to disinfect water that is stored, processed and distributed to homes and businesses at a municipal level. Chlorination is not 100-percent effective against all waterborne contaminants, however, and creates a number of undesirable byproducts; but it is still the cheapest, most efficient killer to help protect us all from many deadly waterborne illnesses.

The various species of chloramine can rapidly shift from one form to another. The predominant species depends on pH, temperature, dissolved oxygen, carbon dioxide, organics in the water and the instantaneous chlorine-to-ammonia ratio. Chloramines can form spontaneously in water or be deliberately formed at the municipal level, since many localities (approximately 20 percent of US municipalities in 2002) actively choose chloramine as their disinfectant technology. Chloramines are chosen because monochloramine is less reactive with other organics in water than free chloramine, meaning that it will stay active for longer in the supply and form significantly fever trihalomethanes and other undesirable chlorine-related byproducts.

Other DBPs can form though, such as toxic halonitriles (cyanogen chloride), halonitromethanes (chloropicrin) and other nitrogen-rich compounds. Some of these compounds can endanger human health. All chloramines are respiratory irritants with trichloramine being the most severe. Chloramines also contribute to corrosion of metals, as well as degradation of rubber. Although chloramines can be difficult to remove with regular activated carbon, I’ve had the very best results with various catalytic carbon blends, depending on what other contaminants are in the water.

Consumers are being told that they must effectively choose between illness and/or death from waterborne disease and microorganisms or a steady decline in quality of life from the permanent damage caused by chlorine compounds and the inevitable byproducts of disinfection. Today’s affordable water-quality improvement technologies give consumers a much better option: disinfect and protect the water with industrial chemicals (like chlorine) at the municipal level to keep it as safe as possible until it reaches the home, then reduce or completely remove the chlorine, DBPs and other contaminants, effectively enjoying the best of both worlds. As a water treatment professional, your primary responsibility is to provide your clients with the very best water at an affordable price in an environmentally responsible manner.

Anatomy of a whole-house carbon filter
There are numerous carbon-based options available to protect your client and their family from chlorine tastes and odors, pesticides, herbicides, emerging contaminants and various DBPs. The scope of this article is primarily chlorine tastes and odors, so if you’re planning on addressing pesticides, herbicides or pharmaceutical byproducts, consult with your equipment manufacturer before making claims on what your carbon filter can do. The simplest and cheapest option is a replaceable POE carbon cartridge, but it has a major downside: reduced flow and pressure. It has its place, but is rarely the best solution for whole-house use.

Professionals will recommend a whole-house (POE) system that meets consumers’ budgets and performance requirements, and can provide the necessary flow and longevity. Whole-house carbon filters can be self-backwashing, non-backwashing upflow or non-backwashing downflow. Each has distinct advantages and disadvantages.

Non-backwashing downflow
This is a simple tank with in/out head and distribution system, usually loaded with gravel and carbon media. Water enters at the top of the tank, moves downwards through the media column and then up the riser. This compacts the bed, traps certain sediment and maximizes contact time with the media. The disadvantage to this type of system is that unless it properly prefilters, the media column will eventually become fouled with sediment and fines, resulting in unacceptable pressure drop and channeling.

Non-backwashing upflow
This is a simple tank with in/out head and distribution system, usually loaded with gravel, bacteriostatic media and carbon media. Water enters downward through the riser, moves upward through the media column and then exits at the top of the tank. While the upflow service protects the media from sediment fouling, it minimizes the effective contact time with the media and often allows for bleed-through of contaminants.

Backwashing
This is a simple tank with a self-backwashing control head (the good ones are computerized and have a flowmeter) and distribution system, usually loaded with gravel, bacteriostatic, sediment filtration and carbon media. Water enters at the top of the tank, moves downward through the media column and then up the riser. This compacts the bed, traps certain sediment and maximizes contact time with the media. After a certain number of gallons have been processed, or after a certain calendar interval, the system backwashes to reclassify the media and purge trapped sediment and media fines. 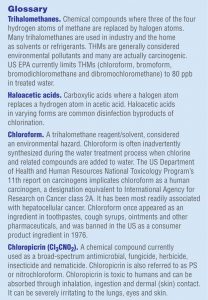 Completing the treatment train
Whole-house carbon systems are frequently installed along with other treatment technologies, such as water softeners, ultrafilters and UV disinfection systems. Since I specify water softeners with highly chlorine-resistant resin, I usually recommend whole-house carbon filters be installed after the water softener and before ultrafiltration or UV to ensure the highest quality of water downstream. Naturally, there are exceptions to every rule, so consult with a local Master Water Specialist and the equipment manufacturer when selecting any water-quality improvement solution.

Maintenance and best practices
Regardless of the system(s) that you install for your client, always be sure to properly disinfect the treatment equipment and downstream plumbing infrastructure after installation. Replace or augment the carbon and other media on a regular schedule as recommended by the equipment manufacturer and according to industry best practices.

Sustainability and certification
End-users are particularly interested in ensuring that every aspect of their lives is as environmentally responsible and sustainable as possible. Established standards such as WQA/ASPE/ANSI S-802: Sustainable Activated Carbon Media for Drinking Water Treatment cover raw activated carbon media products. Certification to this standard covers the sustainability of material sourcing, transportation, processing, distribution and end-of life planning to ensure a minimal environmental impact. In addition to the sustainability of products, the actual performance of systems can be measured against consensus-based standards, such as NSF 42 for aesthetic effects. Often, dechlorination systems are customized for a specific project and will not necessarily be certified as an actual system.