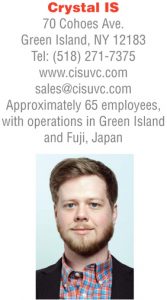 A longtime passion for science as a child led James Peterson to attend Rensselaer Polytechnic Institute in Troy, NY, the oldest technological research university in the United States. He started studying materials engineering before switching to mechanical engineering because he enjoyed the problem-solving aspects of the field. There, Peterson met a fellow student and co-founded Vital Vio, a company that designed, engineered and manufactured lighting systems that reduce bacteria and other organisms on at-risk environmental surfaces. That success earned them a spot on Forbes’ 30 Under 30 list in 2016. Peterson was 26 years old.

In November of that year, Peterson joined Crystal IS, where he works with Chief Technology Officer Leo Schowalter (who was a professor at Rensselaer) before co-founding the company in 1997 in Green Island, NY, a few miles from the institute. “No, unfortunately I did not study with Schowalter. We joke about that sometimes.,” Peterson said. Crystal IS was established to develop single-crystal, native aluminum-nitride substrate technology for more powerful and reliable semiconductor devices. That specialized tech business grew and grew and today is part of a $17.5 billion international company.

Crystal IS has its headquarters and manufacturing in Green Island, plus operations in Fuji, Japan and offices for sales and application engineering support across the United States, Europe and Asia. The company is privately owned by Asahi Kasei Corporation of Japan (since 2011).

As Product Manager, Peterson is responsible for the strategic direction of Crystal IS products focused on the water market—both the Klaran WD series of LEDs for water disinfection and the Optan line of sensing products, as well as developing business models for the company’s UVC emitters. (LED stands for a light-emitting diode and UVC for ultraviolet wavelengths between 200 and 280 nanometers, which can be used for disinfection.) Right now he’s thinking big about something very small. He’s laser-focused on advancing the latest Klaran WD series introduced early this year. (The first Klaran series was produced in 2016.)

Benefits of the new Klaran WD series include high germicidal power output for maximum DNA absorption; non-toxic (compared to current mercury-bulb technology); a smaller footprint that affords design flexibility; instant on/off for energy-efficient operation with no warm-up period; a wide operational temperature range; mechanical robustness and a long service life. The tiny but highly effective deep ultraviolet UVC LED is small enough to fit on the tip of a pencil eraser, yet powerful enough to disinfect the most challenging contaminated waters of the world.

“Our high-performance UVC LEDs render harmful microorganisms (such as bacteria and viruses) ineffective by destroying the genetic information in the DNA. As a result, the microorganisms lose their reproductive capability and are destroyed. These are especially well-suited to treat parasites such as Cryptosporidium or Giardia, which are extremely resistant to chemical disinfectants,” Peterson said. “These UVC LEDs provide effective disinfection on demand.”

The latest Klaran WD series can disinfect water at a rate of up to five gallons per minute. “These are the industry’s highest performing UVC LEDs, and the most affordable,” Peterson said. “This design allows original equipment manufacturers to address the rising global demand for water purification products, as the surge in industrialization, urban populations and water pollution in developing countries propels consumers to take a more active role in ensuring drinking water quality. This is exemplified in the Asia Pacific region, specifically China and India.” The potential market is huge. According to a Crystal IS news release: “In 2015, the water purifier market in China was valued at $4.61 billion (USD) with expectations that this is likely to reach $11.21 billion by 2020.” And that’s just China.

“We are a global organization with strong integration between our commercial and manufacturing teams. This allows us to respond very quickly to volume demands on the consumer and POU sides. We can deliver volume that other LED providers cannot. We serve diverse markets that include sensing, disinfection and other emerging applications that require high performance. The Klaran WD series provides high germicidal power and was specifically designed for POU water disinfection applications by providing high power output at 265 nanometers in a compact, low-cost package. In addition, we provide customers with engineering services and training courses to help them integrate UVC LEDs into their product designs. Crystal IS works with large global OEMs in the water-sensing and POU water markets to develop products that integrate our UVC LEDs. The demand for these systems across international markets is millions of units and our organization can deliver this.” The New York headquarters and manufacturing facility total 24,000 square feet, following an 8,000-square-foot expansion completed in early 2018.

“This is made possible by low-defect density, single-crystal aluminum-nitride substrates and by our proprietary technology for crystal growth. This technology is the foundation of our high-performing UVC LEDs, which provide high light output and industry-leading reliability at price points that are changing the shape of the water sensing and POU water disinfection markets. This is the first instance a UVC LED manufacturer has demonstrated the ability to break the 25-cents-per-milliwatt price barrier required for mass production.”

Crystal IS initially offered 30-mW and 40-mW variants with plans to introduce more powerful devices in the coming months. Native aluminum-nitride semiconductors work entirely different than traditional sapphire-based UVC LEDs or mercury-lamp technology. “This substrate overcomes the material challenges inherent with traditional sapphire-based devices and emits the full germicidal power (260-275 nm) from the top of the chip, allowing for low cost and simpler packaging design. It allows us to operate at much higher currents, which means it is more powerful and can last the lifetime of the consumer product,” Peterson said.

The appeal is immediate. Ever the entrepreneur, Peterson said, “I’m here to push what we consider possible, both in availability and functionality of everyday products, and for the creation of products and technologies that will truly enable the global accessibility of clean water.”