Introduction
The introduction of ultraviolet (UV)-C or germicidal light emitting diodes (LEDs) that emit 240 to 280 nm is already starting to impact developments in water, air and surface disinfection markets as society continues to seek more reliable, efficient and environmentally friendly light sources for disinfection applications. The prospect of producing UV-C LEDs at continuing higher volumes at very low cost means that it has the potential to be deployed more broadly into the global population.

To help understand where this new technology will take us, we have contrasted the development of small-scale, or micro-germicidal UV technologies for water treatment to the evolution of smartphones. Advancements in many technologies (including microprocessors and visible LEDs) have enabled conditions whereby 85 percent of the world’s population currently has access to distributed communications/information access. This has occurred over a relatively short time frame: approximately 15 years. We advocate that the introduction of UV-C LEDs is analogous to the introduction of visible LEDs as an enabling technology for the development of smartphones. That is, the introduction of UV-C LEDs will have a profound impact on a large percentage of the global population, by increasing access to safe drinking water.

Current status of UV-C LEDs
LEDs are semiconductor devices consisting of multiple layers built up from a substrate material. They can be engineered to emit photons in the UV-C range and thus, are used to perform the same functions as conventional mercury-gas discharge UV lamps; however, they are an environmentally friendly alternative because they do not contain heavy metals and do not require special handling or disposal. Moreover, their instantaneous on-off operation and reduced footprint enables higher degrees of design freedom for applications where size, voltage, rapid operation and architecture constraints have prohibited the use of conventional mercury-lamp technology. (The first UV-C LED devices were developed primarily in the US and Japan as extensions to LED devices emitting in the blue and then UV-A and UV-B wavelength region.)

Correlation between smartphones and micro UV-C LED products
So, how do we draw parallels between the two technologies? The World Development Report released in 2016 shows that in the year 2000, only five percent of the world population had access to mobile phones. By 2015, that number grew to 90 percent. This growth is largely due to advancing technologies (such as the visible LEDs) used in smartphone displays and other enabling technologies. Table 1 outlines the factors that have increased the accessibility of smartphones to the global population and attempts to identify similar parallel factors for UV-C LED systems.

It should be noted that advancements in computers have enabled the decentralized and personalized computing opportunities currently available in our smartphones today. Looking back, computers were initially owned by governments, then large corporations and finally became shared by entire departments. This has transitioned to more distributed opportunities, such as the individual and multiple devices we currently use today (e.g. smartphone, tablet, laptop). This offers an exciting parallel for the disinfection world with the development of UV-C LED-based water disinfection systems.

UV water disinfection had a very similar start when compared to computers. Treatment started with large-flow municipal treatment facilities, the first being in Marseilles, France in 1910. Government-owned research and regulatory agencies made developments assisted by large corporations in the adaptation of UV water disinfection technology. By the early 2000s, there were many large-scale UV treatment systems installed in large cities (such as New York, San Francisco, London, Paris, Auckland, Sydney, Hong Kong, etc.). 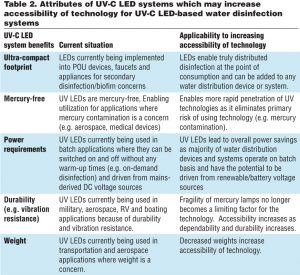 Conventional mercury-based lamps also became smaller and coupled with electronic controllers and global supply chains, there was an increase of household (POE) and commercial (POU) systems that became commercially available. The introduction of UV-C LEDs vastly increased the disinfection application possibilities, as this solid-state technology can be embedded into virtually any product where air, surface or water contamination may be of concern.

Conventional UV lamps have some limitations when you examine the details of distributed UV disinfection, particularly related to the footprint of the combined UV lamp and driver (ballast). Solid-state UV-C LEDs will always have a footprint advantage, given the nature of high-power density of LED technology. This lends itself to a deeper embedding of UV-C LEDs into processes requiring disinfection. In addition, smaller mercury-based UV lamps (less than 20-W input power) are typically less efficient than their higher-power counterparts, providing further drivers for the adoption of UV-C LED for smaller, more distributed flows, e.g. less than 20 L/m (5.2/gpm). 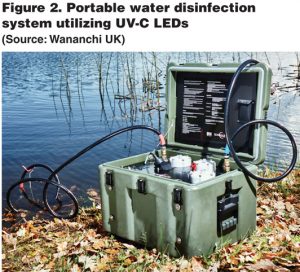 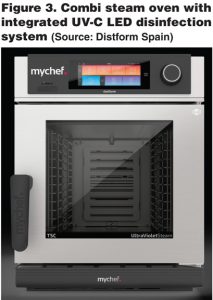 The future of UV-C LED devices and systems is a hotly debated topic within the UV community. The current focus and discussion is on the relatively low efficiencies and optical outputs of the individual UV-C LED devices reported in the literature, compared to the largest available mercury-vapor UV lamps. It is more helpful, however, to consider the product performance of commercial UV-C LED-based products in the sub-20 L/m range, to similar capacity conventional mercury-vapor lamp products. Already, market experience has demonstrated that users are demanding disinfection solutions with the unique benefits offered by UV-C LED sources and are willing to integrate these new solutions. In some cases, the cost is lower and in other cases, users are prepared to pay a premium to do so. In most cases however, UV-C LED solutions are creating new applications for UV technology, rather than displacing existing gas-discharge lamps.

Where will all this development lead and what are the implications for future applications? A good reference point is Haitz’s Law, developed by Roland Haitz, PhD, who has been characterized as the ‘Godfather of LEDs.’ It states that every decade, the optical output of an LED will increase by a factor of 20, while the price per optical output will fall by a factor of 10. A review of current optical output data and pricing for UV-C LEDs suggests that UV-C LED device development is within the limits described by Haitz’s Law. Based on this trajectory, the implication for 2026 is 1.4 Watt per LED at 0.1 $/mW.

What does this mean? Already, based on the status of current technology, we have seen the uptake of UV-C LED water disinfection technologies in the developed world in applications where its incremental benefits are valued. But what about the developing world? Will this technology make water disinfection more accessible for the developing world? Earlier we discussed the rapid advancement of smartphone technology and the fact that 90 percent of the world population now has access to these technologies. To showcase the need for improved water disinfection, the same data source (World Development Report) shows that improving sanitation conditions around the world has only grown 20 percent from 2000 to 2015. Further is the cost to access safe drinking in absolute terms and as a percentage of net income. Most US residents pay less than $1 per cubic meter of clean water, whereas that rises to $3 in the Philippines and over $5 in Colombia.

Conclusion
Clean water has been a struggle for parts of the world for centuries. Increased adoption of UV-C LED water disinfection technologies in the developed world will indeed benefit the developing world and increase the accessibility of disinfection technology. Increased volume in the developed world will lower the overall price of the base UV-C LED technology and combined with engineering enhancements, will increase the affordability of this technology for developing nations. While advancements in nanotechnology allowed 85 percent of the world access to mobile phones in just 15 years, UV nanotechnology will have an important role in the world’s water demands.

About the authors
Oliver Lawal, Founder and CEO of AquiSense Technologies, has been involved in the development of UV LED disinfection systems for more than a decade and has been involved in the UV industry for 20 years. He is also the President of the International Ultraviolet Association. Jim Cosman, Business Development Director, has 20 years of experience in the UV market, with a number of positions in marketing, regulatory affairs and business development. Mitch Hansen is an E-Marketing Specialist with the company and has been an advocate for UV-LEDs, promoting their benefits over conventional applications.

About the company
AquiSense Technologies is the global leader in UV-C LED systems design and manufacture. The company works with leading LED manufacturers to evaluate their devices and then design efficient disinfection products. Using a combination of patented technology and in-depth know-how, the company integrates LED devices into products that solve real-world problems in water, air and surface applications.