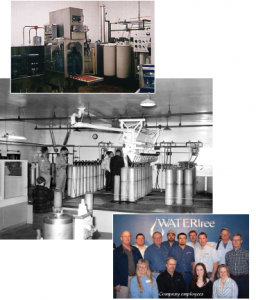 Before the units had arrived, Hamblet had already signed up 150 new customers and, by November, had 300 customers. Realizing that the dealership was growing too fast and it could not financially keep up with his sales, Hamlet went to Minnesota to open a new dealership for two men from Rapid City who decided it was a good business to join.

Several years later when Col. Coffey decided to retire, Hamblet, as silent partner and Dewey Ruel purchased the Rapid City dealership. It wouldn’t be long before another dealer entered the picture to take the company into the future.

From Rockford to Rapid City
Having spent eight hours swimming in the Pacific Ocean during WWII after his aircraft carrier was torpedoed, Darrell ‘Robbie’ Robinson continued to serve in the US Navy and Naval Reserve until 1952. During his active duty service, he met and became best friends with Stu Lytle. After the war, Lytle purchased a Culligan dealership and in the early 1950s, invited Robinson to come to work for him in Rockford, IL.

It wasn’t long before Robinson was given the opportunity to have a dealership of his own in the town of Byron, IL. Byron was a small community and rather than invest in a facility there, he hauled portable exchange softeners to the Rockford plant for regeneration.

By 1954, Robinson and his wife Bee (Elizabeth) decided the Chicago area was not where they wanted to raise two boys. Robinson enjoyed the business; he decided to seek another location where he could advance in this relatively new industry. He was offered the opportunity to manage a dealership in Watts, CA or become part owner of Col. Coffey’s original dealership in Rapid City.

Raised in California, Robbie knew he didn’t want to raise his family there and he also preferred to own the business rather work for someone else. In August 1954, the Robinson family packed up their belongings and moved to Rapid City.

Disaster provides momentum to grow
A flash flood on June 9, 1972 created several new challenges for the Robinsons. All that remained of the building when the water receded was the roof, a side wall, part of the front and some of the office interior walls. Within a week after the flood, the facility was back in operation. Within three months, it was again totally enclosed.

This, however, was not the end of the flood saga. Due the creation of the Flood-Way, the family business was forced off its property and had to build another facility. Robinson took charge and started building the current facility, to which they moved in September 1977. (WaterTree has since added a 13,000-square-foot warehouse at this location.)

The original building houses the showroom, main offices as well as the bottling and DI plants. Two separate businesses operate at this location: WaterTree Water Conditioning and The Pool and Spa Center (WaterTree branched into the pool industry shortly before 1956; Culligan exited the US segment in the late 1960s.). The company also maintains a branch sales office for both companies in Spearfish, SD.

Another generation of change 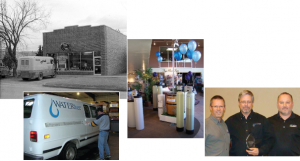 Early in the 1980s, Robbie and Bee retired to spend time with their grandchildren. Their three sons, Gary, Stu and Jim took over running the company; all have worked in the family business for as long as they remember. “It’s where life took me,” Gary said. He started pounding tanks as a little boy and through the years, delivered, installed and sold water treatment equipment.

In 2006, after 67 years as a Culligan dealership, WaterTree was faced with the difficult decision of becoming independent. Concerns with territorial and royalty issues prompted a necessary change in business format. WaterTree’s presence in the Rapid City and Black Hills area was strong and the family felt certain the business could weather the transition.

The Robinsons put their faith and dedication into doing what was right for the company, the employees and most of all, the customers. It moved forward with a supplier they felt confidant was at the forefront of water technology and wholly dedicated to that industry; WaterTree became a Hellenbrand dealer and it proved to be a perfect fit.

A new, thriving company
Today, brothers Gary and Stu own the business. Gary runs the water treatment division with 12 employees while Stu manages the pool and spa division with another 12 employees. Gary’s daughter, Becky (the marketing coordinator for both companies) represents the third Robinson generation.

“We are prouder than ever to have stepped aside from the name brand and grown our own name,” Gary Robinson beamed. “We and our customers have gained many benefits with the changes we made.”

WaterTree will continue to build strong brand awareness. On the horizon and in the future, Robinson sees increased emphasis being placed on drinking water. “People are becoming more aware and concerned about what they are putting in their bodies,” he noted. “For the industry as a whole, I see growth in multiple sectors.

“Water quantity and quality is getting worse, resulting in more people needing our services. Its not just a luxury anymore, its becoming a health necessity. There are always possibilities with new, legitimate technologies and we are dedicated to offering such when they become commercially available.”