Abstract
Nitrate (NO3–) and nitrite (NO2–) are ubiquitous surface and groundwater contaminants, as well as a risk to human health. Existing treatment technologies such as reverse osmosis (RO) and ion exchange (IEx) separate (but do not destroy) nitrate and/or nitrite and generate brines, which require further treatment. This article discusses several catalysis approaches to ameliorate contaminated waters by directly converting NOx– species to non-toxic nitrogen gas and water under mild conditions.

Introduction
Nitrate and nitrite are pervasive surface and groundwater contaminants found worldwide and result primarily from agricultural run-off and sewage treatment plant discharge (the ratio of nitrates, as compared to nitrites, in water is much higher. Nitrates and nitrites promote algal blooms resulting in oceanic dead zones. In addition to causing methemoglobinemia (blue-baby syndrome) in infants, nitrate and nitrite are also linked to hypertension and cancer; US EPA has set a maximum contaminant limit of 10 mgL (as nitrogen) and one mgL, respectively. Currently, the agency lists IEx and RO as accepted potable water treatment methods for nitrate removal.

IEx is the dominant technology used in the US for removing nitrate from drinking water sources and is used in small- to medium-sized treatment plants,1 where nitrate is removed via displacement of chloride on anion exchange resin. Regeneration is accomplished by displacing adsorbed nitrate using a concentrated NaCl solution. The second most common nitrate treatment alternative, RO, is used in both municipal and POU applications and removes nitrate via pressurization through an ion-rejecting membrane. Key factors in the consideration of RO are the cost of pretreatment requirements to prevent membrane fouling and the trade-off between water recovery and power consumption.

RO systems typically have higher capital costs than IEx but a lower operating cost. Both technologies, however, require the costly disposal of a concentrated nitrate brine. Direct biological treatment technologies for drinking water or ion exchange brines have been developed, but require addition of chemical sources (e.g., methanol) and are difficult to turn on and off due to slow biological responses.

Catalysis method removes nitrates by breaking down the molecules
Catalysts are materials that come in contact with reactants to speed up their chemical reactions; they participate in the reaction but remain unchanged themselves. Heterogeneous catalysts, in such forms as powders and pellets, have a surface on which the reactions happen. Nitrate reduction to N2 requires electrons (e–) to produce nitrogen gas and protons (H+) to produce water: NO3– + 6 H+ + 5 e– → 0.5 N2 + 3 H2O

In photocatalysis, light radiation (hν) is converted into electron (eCB–) and ‘holes’ (hVB–) within the light-absorbing solid material. A chemical source (like formic acid) is added to react with the hole, which completes the nitrate reduction reaction (Scheme 1b). Electrocatalysis is another type of catalysis, in which an electrically active solid brings electrons from an external current in contact with nitrate ions (Scheme 1c). Recent successes have been made on the new catalytic and photocatalytic approaches. 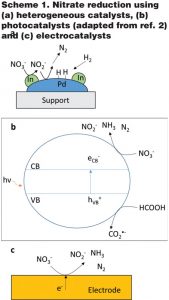 Two-metal composites as heterogeneous catalysts
Catalytic treatment of water contaminants has advantages over physical removal mechanisms (such as IX and RO) in that the contaminant is rendered harmless in one step as opposed to generating a secondary waste stream. Heterogeneous catalysis treatment of nitrates was first reported in 1989, when European researchers found that palladium (Pd) and copper (Cu) metals converted nitrate into nitrogen and ammonia gas.3 Since then, a number of other catalysts, such as PdIn (palladium-indium) or PdSn (palladium-tin), were also identified as active for nitrate reduction.4-6 Nitrate is thought to first be reduced on the second metal (Sn, In or Cu) to form nitrite, which is subsequently reduced over Pd to either N2 or ammonia, but until recently, this thought was largely unproven.

Researchers from the Nanotechology Enabled Water Treatment (NEWT) Center studied this problem by creating palladium nanoparticles decorated with indium atoms.7 They proved that a redox reaction first occurs between indium clusters and nitrate (NO3–), in which nitrite (NO2–) and indium oxide (InOx) are formed. Palladium dissociates hydrogen (H2) into surface-adsorbed H-atoms, which can then further reduce NO2– molecules to nitrogen (N2), and also reduces InOx back into In. The identification of new catalyst structures and operating conditions for nitrite reduction8-9 suggests even better materials can be designed for nitrate treatment.

Progress in developing catalysis treatment methods
Progress is being made into the practical implementation of heterogeneous catalysts for nitrate remediation. Pilot-scale testing efforts are underway with copper-palladium (CuPd)-based nitrate removal systems to treat municipal groundwater supplies in the US.10 Werth and co-workers have developed packed-bed reactors with higher rates of nitrate reduction and focused specifically on developing trickle-bed reactors (TBR) for nitrate treatment for potable water using InPd on GAC11 and reported high rates of nitrate reduction. Further studies, however, are also needed to evaluate catalyst activity, longevity and regeneration when treating nitrate in the presence of common drinking water constituents (i.e., Cl–, SO42-, HCO3– and natural organic matter). Also needed is better information about long-term catalyst performance with respect to influent pH. Nitrate reduction catalysis can also be applied to spent IEx brine.12 A current technical challenge is the lower activity of catalysts when the brine concentation is high.

Photocatalysis offers potential advantages toward implementation. An effective photocatalytic material currently being studied is titanium dioxide (TiO2) coated with nano-sized silver particles, which can convert nitrate to N2 under acidic pH conditions.13 Photons at wavelengths below 360 nm (ultraviolet radiation) excite electrons in TiO2 toward the surface, which are then ‘trapped’ in the silver long enough to be conductively transferred to nitrate that preferentially sorbs due to its affinity with silver. An intermediate is formed (nitrite), which at low pH is directly photolyzed by light around 365 nm to eventually form N2. This conversion is much slower at ambient pH levels (6-8) found in drinking waters, however, and more ammonia is produced than N2. Development of new photocatalysts that generate H2 on the surface (e.g., water splitting photocatalysts) may lead to breakthroughs capable of achieving nitrate conversion to N2 at ambient drinking water pH levels. Until then, photocatalytic reduction of nitrate may be best suited for treating nitrate in an IEx process,14 which would allow longer use of the brines and thus reduce the cost and operational requirements associated with their disposal.

Prospects
Catalytic treatments are advantageous to existing treatment technologies in that they directly convert nitrates and nitrites into non-toxic products, eliminating the need for treatment of secondary waste streams. Practical implementation of catalytic systems for the direct reduction of nitrate is the next stage in active research.

About the authors
Dr. Kimberly Heck is Research Scientist in the Department of Chemical & Biomolecular Engineering at Rice University. Her research interests are on remediation of water contaminants and heterogeneous catalysis. She can be reached via email at knk@rice.edu.

Sujin Guo is a Civil and Environmental Engineering PhD candidate in Prof. Wong’s group. He can be reached via email at sg48@rice.edu.

Professor Paul Westerhoff is Regent Professor in Environmental Engineering at the School of Sustainable Engineering and the Built Environment at Arizona State University. He is the Deputy Director of NEWT. He can be reached via email at p.westerhoff@asu.edu.

Professor Michael S. Wong is Professor and Department Chair of the Chemical & Biomolecular Department at Rice University, with additional appointments in the Chemistry, Civil & Environmental Engineering, and Materials Science and NanoEngineering Departments. He is a Research Thrust Leader in the NSF-sponsored NEWT Center. He can be reached via email at mswong@rice.edu.