A recent outbreak of hepatitis A has been identified in multiple regions of the US, prompting activation of emergency response centers and increased surveillance. Historically, hepatitis A virus (HAV) has been linked to contaminated drinking-water exposures. Emergence of the pathogen throughout 2017 is marked by ongoing cases in multiple states and increased hospitalizations and death rates, compared to previous HAV outbreaks. As investigators work to discover the source of the outbreak and extent of its spread, we are reminded of the role of contaminated water in the transmission of enteric pathogens and the need for increased quality control.

Hazard characteristics
HAV is an enteric virus, meaning it is spread among humans via the fecal-oral route. Fecal contamination of hands, food, surfaces and water can lead to exposure, as well as close contact with an infected person. Infections are typically mild but may progress to severe illness and subsequent damage to the liver and death. Some people infected with HAV have no symptoms while others experience nausea, vomiting, fever, fatigue, joint or abdominal pain and jaundice.

One of the difficulties in tracking HAV illness is the long incubation period. Symptoms may not occur for two to six weeks following infection. Even asymptomatic individuals can spread the disease to others who could experience symptoms for eight weeks. The disease is typically self-limiting but up to 15 percent of symptomatic persons will have lingering effects that can last for up to six months. Comorbidities with other infections or chronic conditions can slow recovery and accelerate liver damage.

Prevention of HAV is most effectively achieved by vaccination. HAV vaccines are highly effective and recommended for anyone over the age of one. Some states require HAV vaccination for school children and other target populations. According to the Oregon Health Authority, vaccinations are credited with the drop of hepatitis A cases in their state from 2,927 in 1995 to an average of 19 cases a year.1 The national total from all 50 states in 2015 was 1,390 cases, compared to pre-vaccine levels in the mid-1990s that peaked at more than 30,000 cases.2 Following release of the HAV vaccine in 1995, disease rates decreased by more than 95 percent. 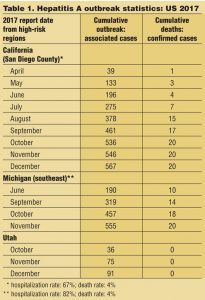 Hepatitis disease emergence
Characteristics of the current HAV outbreak are notably different with an alarmingly rapid spread speed and higher than typical rates of serious illness and death. Certain regions in California, Michigan and Utah have been the hardest hit with serious or fatal outcomes (see Table 1). In Arizona, Colorado, New York and Oregon, however, cases have also been reported over the last year that contributed to the documented increase above baseline occurrence.

Typically, less than one percent of HAV cases lead to serious illness. In the current outbreak, up to 82 percent of cases have led to hospitalization with a death rate of nearly four percent. Researchers aren’t sure why this particular virus strain has a higher hospitalization and death rate compared to previous epidemiology. The higher impacts may be due to comorbidities typical of homeless populations, including alcohol abuse, HIV infection, autoimmune disease, chronic liver disease or co-infections with other hepatitis B or C virus strains.

Michigan health investigators determined early on that the outbreak was not likely due to a common food, water or drug source. Rather, risks were associated with conditions or behaviors such as homelessness or illicit drug use where close contacts and poor sanitation are key factors to manage. Groups advised to get the HAV vaccine are those at high risk of exposure or spreading the disease, including prison inmates and workers, homeless populations, drug users, food handlers and those with certain medical conditions, such as chronic liver disease. However, many of these groups can be hard to reach.

In response, health officials began working to distribute vaccinations to people living on the streets, while others mobilized to educate populations on the importance of sanitation and handwashing. In San Diego County, where the majority of California cases emerged, sidewalks were washed with bleach, additional portable restrooms and handwashing stations were provided in public centers and tens of thousands of preventative vaccines were made available. Additional emergency vaccine supplies were obtained from the CDC for distribution to high-risk areas but these supplies are limited and require time to replenish.

Drinking water risks
Recent US outbreak reports and risk prediction models from water quality monitoring data confirm that exposure to enteric pathogens from drinking water causes more than 19 million infections per year.3 From 2013-2014 (the most recently published survey period), 42 outbreaks were reported from 19 states, resulting in 1,006 cases of illness, 124 hospitalizations (12 percent of cases) and 13 deaths.4 Unknown viral etiology or enteric viruses accounted for approximately seven percent (n=3) of the most recent outbreaks and cases (n=68). Outbreaks were equally as likely to occur from groundwater and surface water sources (n=14 each) but the majority of cases were from surface water sources (n= 795).

In October 2017, a San Diego reporter investigated expert recommendations on whether waterways should be tested for HAV and found the answer to be “murky”.6 Regional risks, including sewage spilling across the border from the Tijuana River and contamination of recreational rivers and beaches, have been identified. Drinking water quality was also questioned. Although there have been outbreaks from untreated drinking-water sources, the CDC has not documented a waterborne outbreak of HAV in treated, municipal water sources in the US in over 30 years. Therefore, despite the recent HAV outbreak and although recreational water exposures are still possible, the CDC recommended no additional water quality monitoring in the area. Given that HAV is not typically monitored in water supplies (instead we use a more rapid, inexpensive and not particularly accurate test for fecal indicator bacteria), testing results would now be difficult to interpret without a previous baseline assessment.

Conclusion
The good news is that HAV is easily inactivated by commonly used water treatment disinfectants, such as chlorine, ozone and UV light. POU water treatment can effectively remove viruses of fecal origin from drinking water, provided a suitable disinfectant step is included. Human enteric viruses are defined as filterable units (approximate size is 28 nm) and thus, filtration methods alone are ineffective for their removal. While HAV prevention is best achieved by vaccination, POU treatment devices continue to be a safety net for the hundreds of waterborne enteric viruses that may contaminate drinking water sources. Private well water supplies and especially shallow wells are most vulnerable to contamination from septic tanks or stormwater runoff.

Globally, hepatitis accounts for more deaths than HIV, tuberculosis or malaria.7 Compared to these other diseases, however, global interventions for hepatitis viruses has been less aggressive. The US outbreak brings renewed attention to an international disease and the need for improvement in basic sanitation and hygiene along with education and vaccine distribution.