By The International Desalination Association

Increases in global population, the need for clean water in industrial applications, pressure on traditional water resources and the impact of climate change all contribute to stress on water supplies. Access to adequate supplies of fresh water is essential for the health and well-being of the world’s population and for the production of most industrial and agricultural products. In fact, desalination is the world’s only sustainable source of new fresh water supplies, while water reuse provides a way to recycle water and extend its life cycle. Against this backdrop, for the fourth year in a row, the global market for desalination and water reuse continues to grow, maintaining a positive trend after the slowdown in the mid-2000s. Here is a snapshot of the market according to the 30th Worldwide Desalting Inventory, which was released in October 2017.

Cumulative global contracted capacity increased from 95.7 million cubic meters per day (m3/d) in mid-2016 to 99.8 million m3/d in mid-2017—an increase of 4.06 million m3/d (or 4.2 percent). Results from January through June of 2016 and 2017 were even stronger. During the first half of 2017, 2,301,000 m3/d of new desalination capacity was added, a 14-percent increase over the same six-month period in 2016. This growth was seen in both the utility sector—primarily due to new projects in the Arabian Gulf—and the industrial sector, where stabilization of oil and gas prices has led to new upstream and downstream projects. The cumulative global, installed online capacity is now 92.5 million m3/d, compared with 88.6 million m3/d in 2016 and the total number of desalination plants worldwide across all categories stands at 19,372 in 2017, versus 18,983 in 2016. 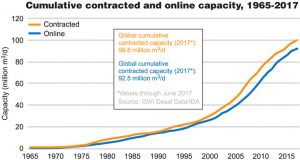 “In the United States, there is very little seawater desalination; instead, the US is the largest market for brackish and industrial desalination. One major exception is the 50-MGD seawater plant in Carlsbad, CA that started up in 2015. Also, there are many smaller seawater plants around the country, mostly in Texas and Florida. Otherwise the vast majority of the world’s seawater plants are in the Middle East, North Africa, southern Europe, the Caribbean, Australia and China,” says Dr. Stover.

The Inventory reports that desalination of brackish water is growing, with an increase of 29 percent in contracted capacity for the first half of 2017. The typical brackish water desalination plant is for smaller utilities and industrial users. China accounted for a large portion of growth in these plants, especially during the second half of 2016. Globally, large-scale projects around the Red Sea and Gulf account for much of the current recovery in the desalination market. The nature of these projects, however, means that this region experiences highly variable swings in contracted capacity. A steadier source of contracts can be found in the Asia-Pacific region, where industrial projects dominate the reference list. At the half-way point in 2017, these two regions were almost equal in contracted capacity, according to the Inventory.

Desalination technologies
As in previous years, membrane technologies continue to dominate the desalination market. For example, in 2017, membrane technology accounted for 2.2 million m3/d of annual contracted capacity, while thermal processes accounted for just 0.1 million m3/d during the same period, according to data in the Inventory. Dr. Stover notes that RO is the most widely-applied and cost-effective method of fresh-water recovery from saline solutions. “Globally, over 90 percent of new desalination capacity uses RO as opposed to distillation technologies. Membranes are increasingly being used to treat brackish and surface water, in industrial concentration and purification processes and in decentralized point-of-use/point-of-discharge applications. In terms of number of RO membrane elements sold, about half go to seawater applications and half to everything else,” he says.

The main challenge in seawater RO applications is its high energy consumption. Roughly half the overall cost of seawater desalination is the cost of energy. Therefore, most of the innovation in the last 20 years (and probably for the next 20) addresses energy efficiency. According to Dr. Stover, the results have been quite successful with the industry reducing the energy required for seawater desalination by a factor of four or more.“Major advances to date have included membrane improvements, the implementation of energy-recovery devices and pump and process improvements. The move toward sustainable desalination and reuse with renewable energy is being widely embraced and offers tremendous promise for the future. IDA, which is a founding member of The Global Clean Water Desalination Alliance (H2O minus CO2) has also signed a collaboration agreement with the Global Solar Council to promote desalination technologies powered by solar power,” he adds.

The desalination industry continues to focus on further enhancing economics and environmental stewardship. Dr. Stover says: “Going forward, the desalination industry is addressing one of the main challenges in brackish and industrial RO and water reuse: the high cost of brine disposal. While highly advantageous from capital and operating cost perspectives, conventional RO generates a substantial flowrate of brine concentrate. Innovative solutions are being developed to increase RO recovery rates and thereby reduce the flowrate of brine, in addition to the development of new brine management technologies. The latter include membrane brine concentrators, thermal brine concentrators and membrane distillation.”

About the organization
The International Desalination Association (www.idadesal.org) is the point of connection for the global desalination and water reuse community. A non-profit association, IDA serves more than 2,600 core members in 60 countries and reaches an additional 4,000 affiliate members. Its membership comprises scientists, end-users, engineers, consultants and researchers from governments, corporations and academia. IDA is associated with the United Nations as part of a growing international network of NGOs. For information about IDA membership, contact IDA at membership@iDadesal.org.