Although groundwater is extracted for use by nearly every sector of the American economy (including agriculture, aquaculture, public supply, industrial and commercial use, mining and thermoelectric power), the market for residential water wells is by far the largest in number of units in place and annually constructed. Today, some 13.168 million single-family residences and 34.19 million citizens (as estimated by the National Ground Water Association [NGWA] from average rural household size) depend on a household water well system for their source of water, according to the 2015 American Housing Survey’s national plumbing, water and sewage disposal data (Table 1). Conducted every two years, the survey found 13.232 million in 2013 and 13.131 million in 2011.

In 1980, the US Census pegged the number at 13 million. Table 2 shows a regional breakdown of the numbers, while Figure 1 displays the states that comprise each region. In 2015, there were 2.11 million more households served by private wells than in 1997. Table 3 shows the 2015 regional breakdown for residential wells in place.

A US Geological Survey report for 2005 estimated some 26 million people were served private well-supplied groundwater from the nation’s 20 principal aquifers. The largest withdrawals, those more than 100 million gallons per day, came from three aquifers in four states: the Glacial aquifer system in Michigan and Indiana, the Floridan aquifer combined with the overlying surficial aquifer system (shallow aquifers typically less than 50 feet [15 m] thick) in Florida and the Central Valley aquifer system in California.

Estimating from biannual AHS data, it appears that approximately 117,000 new household wells on average have come online annually, since 1997. Though some new households get their drinking water from private wells every year, construction of well systems has been sluggish since 1980 and has experienced just a one-percent average annual rate of growth since at least 1997. 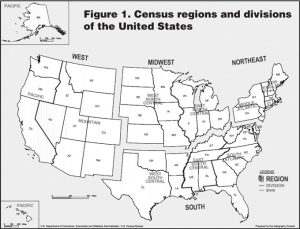 Private household wells constitute the largest share of all water wells in the United States, but they account for a small proportion of the groundwater Americans withdraw—only 3.54 billion gallons a day in 2010, based upon USGS estimates. For all uses, national, fresh groundwater withdrawals are estimated to be 76 billion gallons per day. At an average 2015 cost of $6,500 for a complete residential well and pumping system, per the results of a small sample of US water well system professionals surveyed for NGWA by Industry Insights Inc., annual new residential well construction may be valued at around $763 million a year.

Compiling data
For just 10 states and two water districts in Florida, for which the NGWA has so far compiled data on household wells each year from 2012 to 2016, there has been a reported decrease in construction of about three percent over this period. These numbers do not distinguish between new (first-time) wells or replacement wells for existing housing and they do not account for actual completed single-family house starts. NGWA is dependent upon state agencies to compile data from the drilling contractor reports or permits and the states are in turn dependent upon contractors to file timely reports. Each year in which NGWA conducts its annual well construction survey, we allow states to amend data from the previous year. Many states do amend their counts and almost every time the amendment is upward.

As NGWA continues to compile 2016 data, we expect to see increases for 2015, 2014, 2013 and 2012. But, for the states and two Florida districts in Table 4, NGWA believes these are representative numbers now, subject to change when 2017 data are compiled. There are variations in what the state agencies may provide to NGWA and actual industry activity. For instance, Pennsylvania retrieves numbers internally from its online WebDriller system, but state government representatives believe actual numbers to be much greater. Pennsylvania officials say they know more than half of licensed contractors have not been submitting records and there are probably wells being drilled by unlicensed contractors.

Residential well market growth is being constrained in some US markets by concerns such as exemption from a permitting process for residential wells (common among many of the western states), government-expressed concerns over public health and safety and the expansion of centralized public water distribution systems. Two recent examples of market constraints come from Minnesota.

In Alexandria, the city council this June adopted an ordinance prohibiting (with only very few exceptions) new private wells in the city, where only eight new wells have been drilled since 2011. Existing wells are allowed to continue to be serviced and to operate. In Ramsey County, a district judge ruled this year that the state had allowed excessive pumping of the Prairie du Chien aquifer and, therefore, impacted water levels in White Bear Lake. As a result, she ordered an end to new well permits within a five-mile radius of the lake until the sustainability of the aquifer and the lake can be determined.

Market data indicate most residential water well installations generally do not include application of disinfection technology, although only 38,000 households served by wells had water deemed “not safe to drink.” The 2011 AHS (updated in June 2014) found that across the nation, only about 31 percent of households served by wells reported the “well has been disinfected.” The percentage was slightly higher for owner-occupied homes (32 percent) than for renter-occupied homes (29 percent). About 26 percent of new construction during the previous four years had disinfected wells and about 28 percent of manufactured/mobile homes met that condition. Elderly households showed 32 percent with disinfected groundwater supplies, Hispanic at 29 percent and African-American at 23 percent.

If, after testing, cause is found for treatment of groundwater from a residential well, there are also these identified barriers:

Innovative approaches to address well owner reluctance may include:

Developing a message
At a private well conference convened in May 2017 at the Illinois State Water Survey, researchers and public health and outreach officials found through an examination of multiple private well owner programs that water well system professionals are key, credible stakeholders in developing effective messaging and in effectively reaching and motivating well owners to protect their drinking water quality. The NGWA survey of water well system professionals found 84 percent of the sample count water treatment/conditioning among their services. Most well owners will not chlorinate properly and many well owners cannot afford to hire a professional, according to conference participants. An estimated 11 percent of American households using a well system fall below the national poverty level and only 32 percent of them have disinfected groundwater supplies.

Conclusion
After more than 30 years of activity, the US household water well market has grown slowly, but still represents a significant opportunity for the water treatment and conditioning professional.

About the author
Kevin McCray, CAE, Chief Executive Officer of the 11,000-member National Ground Water Association, will retire December 31, after 22 years as NGWA’s CEO and more than 38 years of working in the groundwater sector. He has served on a number of water-related advisory groups, including the US Department of Commerce Environmental Technology Trade Advisory Council. McCray has worked to increase international awareness of groundwater and of the association, which today has 17 foreign, mutual cooperation agreements. In addition to dozens of articles, he has authored or compiled six books for the groundwater industry.

About the association
NGWA is a community of groundwater professionals working together to advance groundwater knowledge and the success of its members through education and outreach, advocacy, cooperation, information exchange and enhancement of professional practices.