Climate change scenarios predict that almost half the world’s population will be living in areas of high water stress by 2030. Increasing population and unpredictable rainfall is driving the practice of wastewater reuse for irrigation, agriculture and even drinking. Treating the water to high-quality safety and taste standards can be a challenge but the greatest challenge is in transforming public perceptions to support potable reuse.

Water shortages
Host to about 30 percent of the world’s freshwater supply, groundwater aquifers are being rapidly depleted, resulting in a collapse of the underground storage capacity.1 [This condition has led to a literal sinking of cities, some of which have dropped by up to 28 feet.2] Worldwide potable water use is at an unsustainable and even detrimental rate.

From 2014 to 2050, the world’s population is anticipated to increase by 33 percent (from 7.2 to 9.6 billion). By 2025, 1.8 billion people will be living in countries or regions with absolute water scarcity (when annual water supplies drop below 500 cubic meters) and two-thirds of the world’s population could be living under water-stressed conditions (when annual water supplies drop below 1,700 m3 per person).3 We can predict with some certainty that unless a sustainable water supply is identified, particularly within highly populated regions, unrest, disease and death are likely to rise. Although cities with the largest populations tend to be the most over-stressed, they also produce the most waste, including wastewater.

In the US desert southwest, the availability of a consistent, high-quality potable water supply can be highly dependent on seasonal rains or drought conditions. When water supplies are dependent on unpredictable climate events, particularly in areas of scarce resources, there are ongoing concerns of water wars. Population growth, food and agriculture needs and reduced snow pack create additional demands on current water supplies. The most likely solution for addressing water demands involves some level of potable reuse. 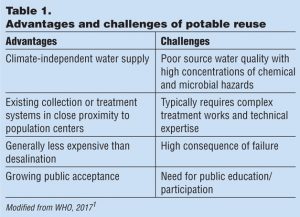 Over the last two decades, we have seen a dramatic increase in water reuse applications around the world. While there are clear advantages, potable reuse implementation has some distinct challenges (Table 1).

In response, the World Health Organization (WHO) recently published Potable Reuse: Guidance for Producing Safe Drinking-Water, detailing both the drivers and challenges of implementing reuse systems.1 The document, geared toward drinking-water providers and regulators, describes goals for the development of potable reuse schemes and primarily focuses on:

Public acceptance has historically proven to be a significant barrier to the success of potable reuse programs. Many still refer to this process as ‘toilet-to-tap’ water supply, but today’s technologies and education on the safety, sustainability and need has decreased public trepidation.

An understanding of the treatment technology generally improves public acceptance. Treatment consists of a multi-barrier approach, designed with redundancy, to address the variety of pollutants including microbes, physical and aesthetic parameters, trace organics and DBPs and other critical contaminants. Redundancy means that failure in a single barrier is compensated for in a second or third barrier. Safeguards such as engineered storage methods, which provide a time buffer between when water is produced and consumed, allow for response in the event of a treatment failure. A final barrier at the point of use offers even greater peace of mind for consumers of reuse water supplies.

Successes and failures
Gaining and maintaining public confidence and trust is important in implementing potable reuse. The WHO guidance refers to this effort as the ‘Art of Public Engagement.’ Open, transparent communication with positive messaging and clear, readily available information is paramount to the program’s success. Engaging stakeholders from the community, including the media, politicians and opinion leaders is central to maintaining support. Focusing on the diminishing options for sustainable water supplies, the safety and proven technology of treatments and the overall benefits of potable reuse help to improve acceptability.

Public opposition to potable reuse has effectively shut down implementation plans in some communities, despite a sound strategy for execution and safety validation. For some, the psychological perception of drinking toilet water created a resistance that was not easily overcome. For example, in Toowoomba, Australia, following dropping dam levels and water restrictions, the City Council planned for new strategies to address the water supply and sustainability problems. The Water Futures Initiative featuring potable reuse was announced in 2005, but as a policy document, not a public communication. An outspoken activist group, Citizens Against Drinking Sewage, launched an extensive public communications plan that eventually resulted in complete abandonment of the program and a damaged relationship with the public.

Thankfully there are many more success stories and some very creative outreach efforts to share. Singapore is a potable reuse success story where approximately 40 percent of the city’s water demand is fulfilled by reclaimed water. This region is particularly admired for their successful community engagement and approval of the practice, with a 98-percent acceptance rate.1 Public exhibitions, as well as roadshows at schools and community centers, increased education and outreach among key stakeholders. Construction of the NEWater state-of-the-art water museum was an added interactive display of the treatment process. Touring the museum became part of Singapore’s National Education Program, allowing every student an opportunity to visit the museum during school.

In Arizona, the AZ Pure Water Beer Challenge incorporated a fun factor to water reuse education by challenging local breweries to use purified wastewater in their craft beers. Located in the Tucson desert, Dragoon Brewing Company’s Clear Water Pilsner won the statewide challenge and is credited with making the best-tasting beer from recycled water. Local media headlines were mostly positive, ranging from Beer Brewers Test A Taboo to Yes, You Should Drink Beer From Recycled Water.4 The outreach effort began more than a year earlier with collaborators from industry, government and academia. Ozone, microfiltration, ultrafiltration, reverse osmosis, ultraviolet light and hydrogen peroxide make up the treatment chain that was constructed in a portable semi-trailer truck sent on the road to engage the Arizona community in becoming ‘more fluent about effluent.’5

Sustainable reuse
Potable reuse is here to stay and consumer confidence is appropriately enhanced by knowledge of effective, multi-barrier treatment technologies capable of producing high-quality, safe drinking water. With any human technology, however, accidents and failures can occur. Given the quality of the source water, failures with a potable reuse system have the potential of causing more adverse health effects than traditional groundwater or surface water supplies. Therefore, for increased protection, a final POU barrier is recommended as we transition into the use of more varieties of drinking-water sources.